Paul Tisdale’s side will be looking for their first victory since the 3-0 win over Blackpool tonight, and in the process, their second successive Leasing.com Trophy Group Stage win.

Goals from Max Power and Luke O'Nien condemned MK Dons to a 2-1 defeat, with Jordan Bowery netting for the Dons at the Stadium of Light.

The Cup provides a change of scenery for Tisdale's side, while we may also see him rotate his side in order to give players more minutes.

THE OPPOSITION
Fulham Under-21s enter tonight's clash as somewhat of an unknown quantity. Their first-team are also in action this evening, as Scott Parker's side travel to Reading in the Sky Bet Championship. This will most likely mean a younger squad will take to the field at Stadium MK this evening.

Tonight will be Fulham's first outing in the Trophy this season, however, they have participated in the last two seasons - but are yet to progress out of the group. Likely to feature tonight is former Chelsea striker Martell Taylor-Crossdale, the 19-year-old joined Fulham in the Summer and has already made his first-team debut.

Max Power and Luke O’Nien struck within four minutes of each other and despite Jordan Bowery’s second-half finish, Paul Tisdale’s men weren’t able to salvage a result to take back to Milton Keynes.

Two became three minutes before the break as Connor Malley gave his side a two-goal cushion. Santos-Clase did draw one back, however, Middlesborough put the game to bed with 15-minutes to go, as Rumarn Burrell scored the sixth goal of the afternoon.

Tisdale, may, however, use the Leasing.com Trophy as a chance to hand some of his squad valuable minutes. We may see the likes of Stuart Moore, Matthew Sorinola, Dylan Asonganyi get a chance to impress.

Tisdale did suggest prior to Saturday's clash with Sunderland, that Jordan Moore-Taylor may feature for MK Dons. If he does, it'll be his first appearance since January.

THE OFFICIALS
Darren Drysdale is tonight’s match official, refereeing the Dons for the first time since their 2-1 defeat against Rotherham back in December 2017.

So far this season, Drysdale has issued 43 yellow cards and one red in his 11 games.

Tonight’s assistant referees are Adrian Tranter and Christopher Kidd while the fourth official is Thomas Harty.

ELSEWHERE IN THE LEASING.COM TROPHY

FOLLOW IT LIVE
Under-18s can watch Tuesday’s Leasing.com Trophy tie with Fulham Under-21s for just £1 while adult tickets are priced at only £5.

MK Dons take on the Cottagers this Tuesday evening looking for their second successive win in the competition. Kick-off is at 7.45pm.

Tickets are priced at just £5 adults and £1 under-18s, with seating in the clubRed area of Stadium MK. Please note, there will be no clubRed benefits for this fixture.


There were many positives for manager Paul Tisdale to take from the Leasing.com Trophy victory over Fulham Under-21s in midweek, not least an impressive senior debut from Matthew Sorinola. 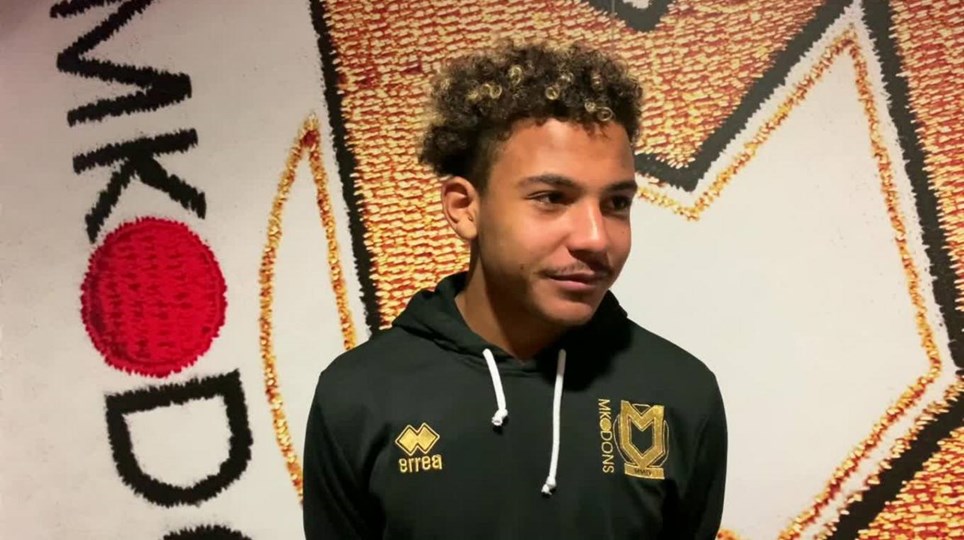 MK Dons made it back-to-back victories in the Leasing.com Trophy after a 1-0 win over Fulham Under-21s.

After dominating the first half, the Dons finally found the breakthrough via Kieran Agard as the forward turned home from Brennan Dickenson's cross.

Despite it being a cup competition, Paul Tisdale fielded a strong team with Dean Lewington, Regan Poole, Alex Gilbey and Russell Martin all retaining their place in the squad. Elsewhere, first-team regulars, Hiram Boateng and Kieran Agard were also handed a start.

Stuart Moore was handed Goalkeeping duties for the evening, while Dylan Asonganyi partnered Agard in attack.

Tisdale also handed a first-team debut to Matthew Sorinola, while there was also a return to action for Jordan Moore-Taylor, who featured for the first time since January.

It was Fulham who had the first chance of the evening, as Luca De La Torre drove forward after winning possession, he dragged his effort wide of Moore’s goal.

Sorinola then had his first involvement of the evening, he disposed Zico Asare, before reliving the pressure by finding Moore.

The first chance for MK Dons came via Sorinola too, he picked out Jordan Moore-Taylor after a corner was cleared – the defender could only head over.

Moore-Taylor went close once again from a corner, this time putting wide from Gilbey’s corner with 10-minutes on the clock.

Sorinola was looking bright down the right, his driven cross was headed narrowly wide by Agard.

The Dons almost found the lead through what would’ve been a freak goal as Gilbey blocked the clearance of Fulham’s keeper Luca Ashby-Hammond, only for the ball to bounce off the post and into Ashby-Hammond’s arms.

The Dons continued their early dominance, as Agard had a low shot blocked before Dickenson’s corner was headed away by Ben Davis.

Agard went close again on 17-minutes, after some impressive work by Poole. The defender picked up the ball in his own half before driving into the box, he found Agard who had his shot deflected behind.

Martin then hit the crossbar after Moore-Taylor headed into his path from Dickenson’s corner.

Conor McAvoy was penalised for handball on the edge of the box for Fulham, with both Dickenson and Gilbey standing over the free-kick. It was Dickenson who took – his effort cannoned off the upright before Fulham cleared.

Agard was then denied with 25-minutes on the clock by some last-ditch defending from the Fulham backline.

Asonganyi almost gave the Dons the lead with five minutes remaining in the first-half, after Agard’s cross was cleared, Martin picked up possession on the edge of the box. After shaping onto his right foot, he floated a cross into the box, but Asonganyi headed narrowly wide.

The final chance of the first half came for Fulham, as David dragged wide from the edge of the box before Moore claimed the following corner.

After an impressive return to action, Moore-Taylor was subbed at half-time and replaced by Conor McGrandles.

The midfielder had an immediate impact as he played a crucial role in the Dons taking the lead. Having received the ball just inside the Fulham half with his back to goal, McGrandles backheeled into the patch of Dickenson, his low delivery was turned home by Agard. 1-0.

The visitors looked for an immediate reply and had two chances within quick succession - Moore was equal to both.

With time and space inside his own half, Gilbey picked out the run of Agard with a perfectly weighted through ball. After getting the ball under his control, Agard forced a corner, Dickenson's cross was cleared.

McGrandles was involved once again in the final third shortly after the hour mark, and could've had an assist to his name if it wasn't for some clever goalkeeping. He kept the ball well inside Fulham's box before picking out the run of Asonganyi, his shot, however, was saved.

The Dons continued to push for their second of the afternoon and came close when McGrandles' free-kick was headed over the bar by Poole.

Moore then made a crucial save from six-yards to deny Sony Hilton before Brittain cleared.


There were many positives for manager Paul Tisdale to take from the Leasing.com Trophy victory over Fulham Under-21s in midweek, not least an impressive senior debut from Matthew Sorinola.