MK Dons travel to Highbury Stadium this weekend to take on Fleetwood Town in their latest Sky Bet League One outing.

Paul Tisdale’s men are without a league win since their 3-0 thrashing of Blackpool back in September so a victory over the Cod Army Saturday would give the Dons a much-needed boost.

THE OPPOSITION
Fleetwood Town enter this Saturday's game placed fifth in the table as they continue their push for a promotion spot. The Cod Army have picked up 23 points from their opening 13 games and are just four points behind leaders Peterborough United.

Highbury has proved to be a tough hunting ground for away sides this season, with Joey Barton's side boasting the fourth-best home form in the league. They've lost just once in seven games in front of their own fans - picking up five wins and scoring 13 goals.

Striker Paddy Madden has scored 10 goals this season and is currently second in the top-scoring charts behind Ivan Toney. Elsewhere, Josh Morris and Kyle Dempsey provide a goal threat from midfield, while the likes of Paul Coutts and Jordan Rossiter give the Cod Army options in midfield.

Camps struck from a corner after just two minutes while Henderson headed in from a set-piece on the hour to seal the victory for the home side.

Fleetwood Town, meanwhile, also suffered defeat during the week - they fell to a 2-1 defeat against Coventry City.

Paddy Madden put Fleetwood ahead, but goals from Bakayoko and Westbrooke secured the three points for Coventry City on Wednesday evening.

FIGHTING TALK
Paul Tisdale: "We can only consider ourselves and making our lives easier for ourselves. The players have to play a part in this, it's not just me having the ideas. They have to realise the importance of this to themselves and the club. I have to give them the right directions and then they have to go out and do it."

Joey Barton: "I went to watch MK Dons against Rochdale and they will play 3-5-2 and it’s one I am looking forward too. We will have plenty of opportunities to cause them problems, and we will need to be on the front foot with the fans behind us"

TEAM NEWS
MK Dons boss Paul Tisdale didn't reveal any fresh injury concerns in Thursday’s pre-match press conference. Both Kieran Agard and Ben Reeves continued their road to recovery on Tuesday night with the duo featuring in the second half.

On Agard and Reeves, Tisdale said, "They're two different injuries. Kieran has played a lot of football in the last year, and has missed three weeks. Ben has been out for a lot longer, missed pre-season so it is a very different scenario."

Ben Reeves came through his return to action unscathed so could feature, once again. So too might Jordan Houghton, who returned to the bench last time out following a short spell on the sidelines.

Regan Poole is also back in the squad after missing the defeat to Bristol Rovers while on international duty with Wales but strikers Rhys Healey (thigh), Sam Nombe (knee) and Joe Mason (hamstring) remain long-term absentees.

Fleetwood Town have no injury concerns heading into the clash.

OFFICIALS
Marc Edwards will run the rule over this Saturday's clash at Highbury.

The three-year EFL referee has taken charge of 10 games so far this term, and has produced 24 yellow cards and one red during that time.

His assistant referees are Anthony Moore and Daniel Woodward while the fourth official is Matthew Bristow.

FOLLOW IT LIVE
Tickets, which are available in standing or seated areas, are priced from £22 adults, £17 seniors/under-25s and £7 under-16s while under-5s go FREE.

Official Away Travel is available for this fixture, with coach spaces priced at £26 Season Ticket holders and members and £27 all other supporters. Coaches will depart Stadium MK at 8.30am.

To book tickets click HERE, visit the Box Office at Stadium MK or call 0333 200 5343. Tickets will be available from the Club until 5pm on Friday. 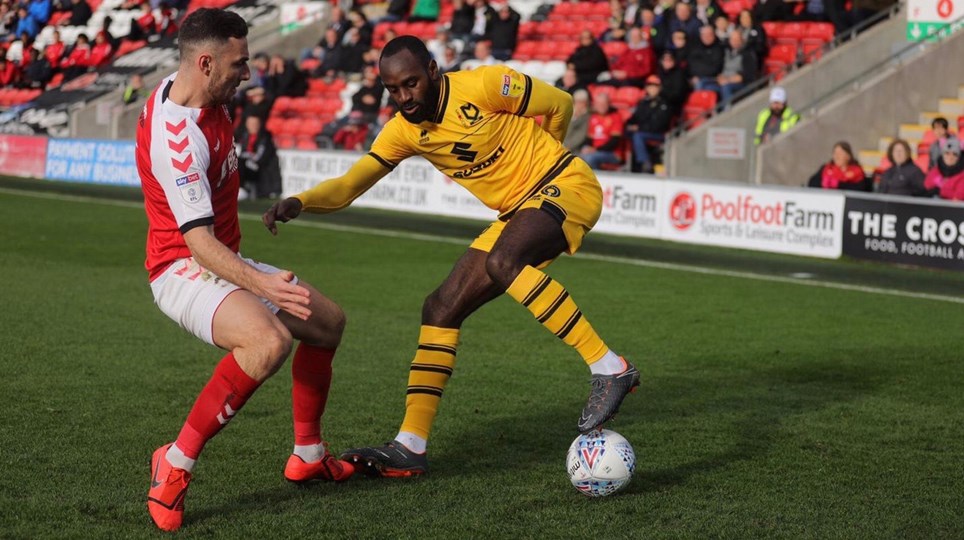 A spirited defensive display looked to have earned Paul Tisdale’s men a point on the Fylde coast but substitute Evans struck with five minutes to play to earn his side all three points.

The defeat – the Dons’ seventh in eight games – sees them drop to 20th in the Sky Bet League One table.

Boss Tisdale made five changes from the midweek defeat to Rochdale, with Joe Walsh, Regan Poole, Kieran Agard, Jordan Houghton and Hiram Boateng all coming to the starting line-up.

Poole took up a spot in central midfield and started strongly, winning three big headers in quick succession on the half-way line. His midfield partner Houghton later swung in a teasing cross from the right which the Dons weren’t able to take advantage of, despite Alex Cairns failing to gather.

Fleetwood threatened from two corners either side of the 10-minute mark but the Dons were able to deal with both deliveries. Wes Burns then had the hosts’ first shot on goal – an ambitious left-footed strike which flew well wide.

There wasn’t much in the way of chances until Boateng met a whipped cross from George Williams on 25 minutes and headed over the bar from eight yards out. Fleetwood responded and Kyle Dempsey had an attempt blocked on its way through to Lee Nicholls.

It took a well-timed tackle from Jordan Moore-Taylor to dispossess Dempsey inside the area in the 33rd minute, moments before Paddy Madden headed wide from a right-wing cross.

With six minutes to play in the half, Fleetwood had the ball in the net through Josh Morris but the goal was rightly chalked off due to a foul on Nicholls in the build-up. That was the final effort before the referee’s whistle sounded for the interval.

Early in the second half, the hosts had two great opportunities to break the deadlock. First, a vital touch from Poole prevented Madden from having a tap in at the far most, and then half-time substitute Ched Evans failed to convert from close-range after connecting with a return ball in.

MK Dons countered with Callum Brittain, who sent a fizzing low ball across the face of goal – one which went untouched. Soon after, at the other end of the pitch, Poole threw himself in the way of a goal-bound strike from Jordan Rossiter.

On 56 minutes, Harry Souttar headed over from a Fleetwood corner. Teammate Madden also failed to hit the target with a header, minutes later.

Tisdale then went to the bench and made his first substitution of the game, replacing Boateng with Conor McGrandles.

Nicholls was forced into his first real save on the hour mark, showing great reflexes to deny Burns. MK Dons went straight up the other and saw Gilbey fire over with an ambitious long-range effort.

Three minutes later, Coutts had an 18-yard shot deflected off target which led to a chance for Dempsey from the corner – his volley sailed over the goal and into the MK Dons supporters behind the goal.

The Dons came forward again with 20 minutes to play and Gilbey had a first-time shot deflected wide. McGrandles also had an effort blocked as he searched for a way past the Cod Army.

Jordan Bowery then replaced Brittain, moments before Moore-Taylor bravely got his head in the way of a fierce Fleetwood strike. The hosts later missed the target from a free-kick, five yards from the edge of the box.

The game was finely posed but with five minutes to play, the home side edged in front in fortuitous circumstances. Nicholls appeared to have gathered a cross from Lewie Coyle but a collision with a teammate saw the ball spill free to a grateful Evans, who slotted in. 1-0.

Baily Cargill was Tisdale’s final roll of the dice. He came on with two minutes to play in place of Lewington and almost earned his side an equaliser. However his stoppage-time header failed to hit target and neither he nor a teammate were able to muster another opportunity.