MK Dons travel to the Memorial Stadium this afternoon for their Sky Bet League One clash with Bristol Rovers.

Paul Tisdale’s men go into the match on the back of a 3-0 defeat against Burton Albion last weekend, and will be hoping to pick up their first win since the away victory over Blackpool.

The Dons currently sit 17th in the Sky Bet League One table, seven points adrift of the top six. A victory against the Gas, would not only put an end to their run of losses bit could also lift them up the table.

THE OPPOSITION
Bristol Rovers have started the season in fine fashion and currently occupy seventh place in the Sky Bet League One table, and sit four points off an automatic promotion place.

Their squad boasts two former Dons in the shape of Jonson Clarke-Harris and Ed Upson - the former has netted seven goals in the league so far this campaign. Elsewhere in the side, Tony Craig, Tom Nichols, Ago Ogogo, Alex Rodman, Ed Upson and Tyler Smith have all found the net.

Graham Coughlan's side boasts the fifth-best home record in Sky Bet League One, having collected 12 points from their six away fixtures in 2019/20.

LAST TIME OUT
A brace from Liam Boyce and a second-half strike from Oliver Sarkic saw MK Dons beaten 3-0 by Burton Albion at Stadium MK.

Boyce opened the scoring with a diving header midway through the first half before Sarkic doubled the advantage with a well-struck curling effort on 53 minutes. Boyce then rounded off the win with a low drive in stoppage time.

Bristol Rovers have been without Sky Bet League One action for over two weeks, with their last outing coming on the 28th September.

That day, they picked up a 1-0 win over Rotherham, a result that leaves The Gas seventh in the Sky Bet League One table.

Jonson Clarke-Harris netted his seventh goal of the season that afternoon.

FIGHTING TALK
Paul Tisdale: “We’ve got some good players who are worthy of playing in this league. I back them all and I want them all to do really well. The most important thing now is that we stick together and get through it.”

Graham Coughlan: “I think we all know what MK Dons are about, they are a really good technical football team, they'll always come at you with the unexpected so your preparation is never as easy as it can be because you just don't know what they will do. Paul always works on different formulas and different patterns of play, so nailing them down will be difficult.”

TEAM NEWS
MK Dons boss Paul Tisdale noted in his pre-match press conference that Ben Reeves is edging closer to a comeback after his injury lay-off.

He added that Kieran Agard remains sidelined along with Joe Mason, Rhys Healey and Sam Nombe.

Bristol Rovers will be without top scorer Jonson Clarke-Harris, he misses the clash with a muscle injury.

REFEREE
Anthony Backhouse will take charge of today's clash, it'll be his first time overseeing MK Dons since the 1-0 win over Forest Green in August 2017.

Mr Backhouse has marshalled nine matches so far this term, producing 36 yellow cards but only one red. He has awarded two penalties.

His assistant referees are Ryan Whitaker and Hristo Karaivanov while the fourth official is Savvas Yianni. 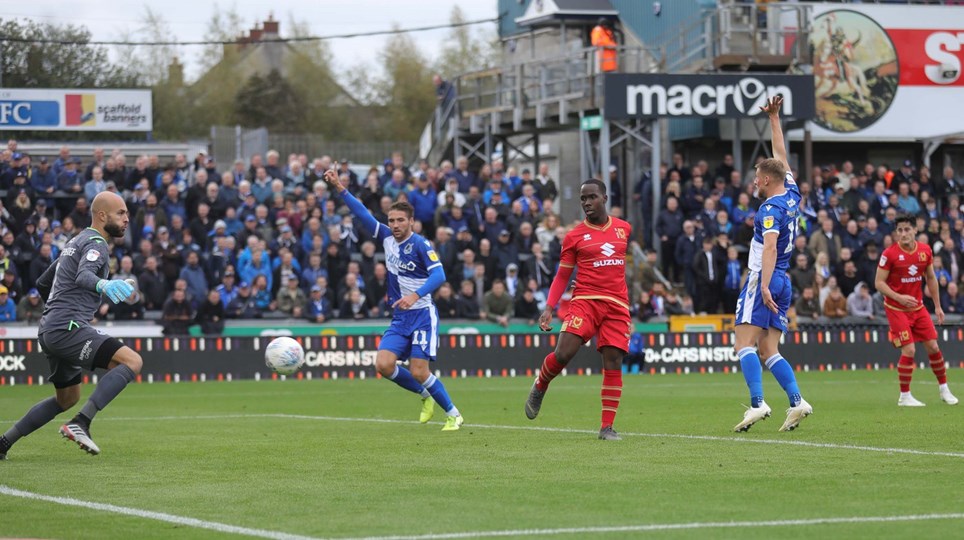 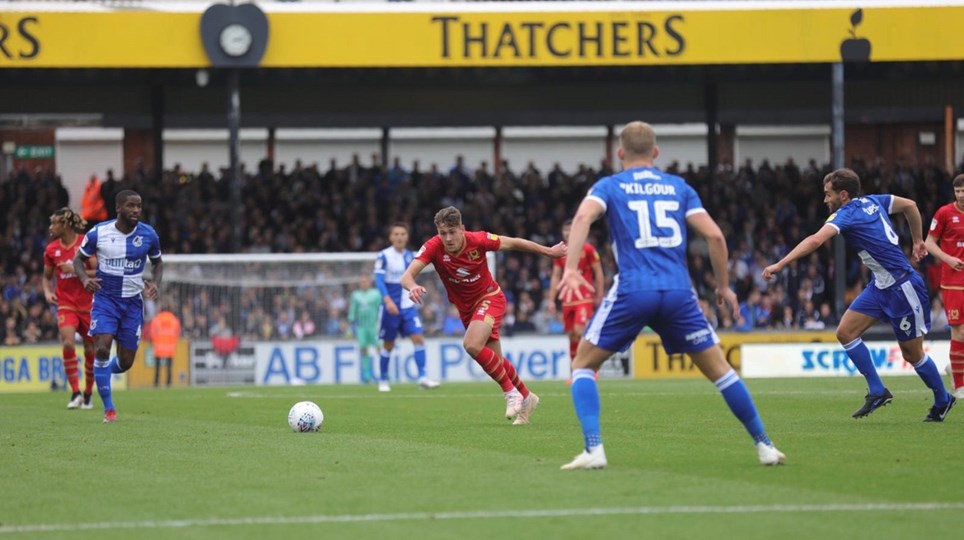 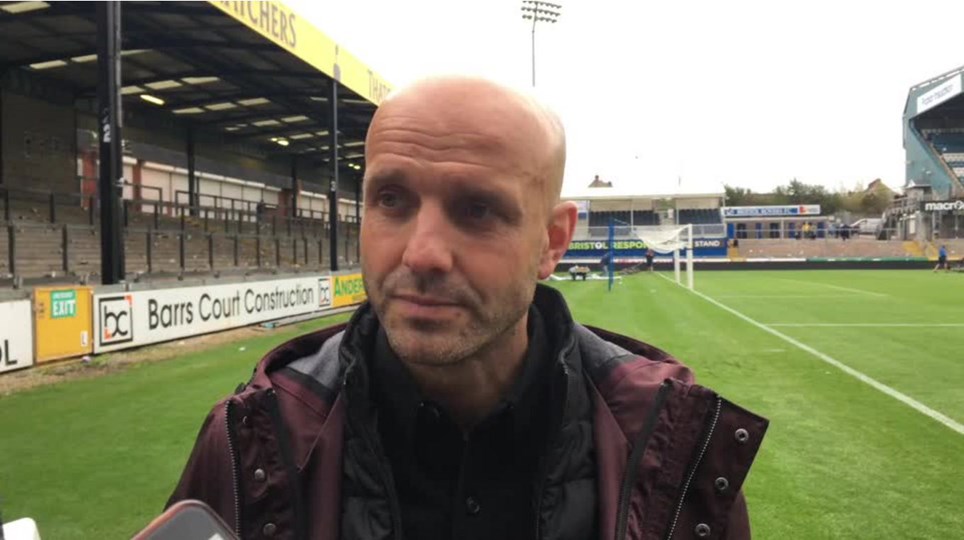 Tom Davies’ goal was the difference as MK Dons were beaten 1-0 by fourth-placed Bristol Rovers at the Memorial Stadium.

Davies struck four minutes into the second half and despite a battling display, Paul Tisdale’s men weren't able to restore parity - suffering their fifth straight Sky Bet League One defeat to leave them 18th in the table.

Boss Tisdale was forced into making two changes to his starting XI with Regan Poole away on international duty and Alex Gilbey unavailable due to an illness.

In came Baily Cargill for his first league start since returning from injury, as well as George Williams. Ben Reeves was back in the squad for the first time since opening day while Jordan Houghton also made a return.

The Dons started confidently but it was Rovers’ Tyler Smith who had the first shot of the match – a right-footed drive which was blocked by Joe Walsh. Tisdale’s men countered and Jordan Bowery’s cross was deflected just wide of the post by Tom Davies.

Nicholls was forced into action for the first time in the ninth minute, diving to his right and gathering a header by Tom Nichols. At the other end, Conor McGrandles fired over from the edge of the D after a good attacking move down the left flank.

Nichols had another opportunity to beat his namesake on 12 minutes but dragged his shot well wide of goal from 15 yards out. The end-to-end nature of the affair continued as it was the Dons who had the next chance – a Dean Lewington header, from George Williams’ cross, which flew over the bar.

Soon after, Abu Ogogo blazed high above Nicholls’ goal with his effort from the edge of the area. The Dons then broke forward with Bowery, following a neat dummy by Brittain. The two tried to link up again but couldn’t connect and the hosts were able to clear.

With nine minutes to play in the half, Martin got in the way of Smith’s drive, after he had pounced on a loose ball inside the area. Alfie Kilgour later headed wide from a Rovers free-kick.

It was the Dons who would have the final opportunity to prevent a goalless first half as Bowery cut inside and teed up Boateng, however, he couldn’t keep his left-footed curler down.

Nicholls was called into action two minutes into the second half to tip a Sercombe volley over the bar. From the resulting corner, the MK Dons number 1 made a stunning save at point-blank range to keep out Davies’ header.

He could, though, do nothing about Davies’ next effort, as the Rovers defender latched onto a corner from the left and looped a first-time shot over Nicholls’ outstretched arm and into the far corner of the net. 1-0.

The Dons had an opportunity to respond shortly after from a free-kick but Lewington’s in-swinging delivery was claimed by Jordi van Stappershoef.

Tisdale then went to his bench for the first time, replacing Dickenson with Martin and pushing the former Colchester United man up top alongside Bowery.

On 62 minutes, Tony Craig headed over for the home side. At the other end, Boateng forced van Stappershoef into a save with a left-footed strike from the edge of the area.

Nicholls denied former Don Ed Upson with a diving save a minute later, before Nichols headed over from deep inside the area.

Reeves came off the bench with 25 minutes to play for his first appearance since the opening-day victory over Shrewsbury Town. He soon latched onto a pass inside the but saw his cross blocked by a Rovers defender.

Dylan Asonganyi entered as Tisdale’s final change with a quarter of an hour to play. Dickenson went close to picking him out on 84 minutes but saw the low cross blocked on its way through to his strike partner.

Asonganyi did put the ball in the net with three minutes to play but the offside flag denied him. The young striker had another opportunity moments later but had his effort blocked.

Four minutes of added time were awarded, but Tisdale's side weren't able to find a goal before the full-time whistle sounded.