Russell Martin makes his managerial debut this afternoon as his MK Dons side play host to Port Vale in the Emirates FA Cup First Round Proper.

His first game takes a step away from Sky Bet League One action, as Port Vale arrive at MK1 for both sides to begin their Emirates FA campaign.

THE OPPOSITION
Port Vale have made an impressive start to their Sky Bet League Two campaign - they currently sit 10th in the table - just two points off a playoff position.

Tom Pope is a name many fans will recognise, he's netted three times in seven league starts, while defender Nathan Smith also has three goals to his name.

LAST TIME OUT
A hat-trick from Rushian Hepburn-Murphy condemned ten-man MK Dons to a 3-1 defeat at Stadium MK.

The scores were level heading into the break after Ben Reeves cancelled out Hepburn-Murphy’s early opener, but a dubious red card shown to Kieran Agard on the stroke of half-time meant Paul Tisdale’s men had to play the final 45 minutes a man down.

Tranmere made that advantage count, with Hepburn-Murphy striking twice to secure his hat-trick and seal the points for the visitors.

Port Vale, meanwhile, picked up all three points against local rivals thanks to Jake Taylor's goal.

FIGHTING TALK
Russell Martin: “We've watched a lot of [Port Vale] this week, but my main focus has been on us. We're aware of what they can do, and they were a good side here last season, but this week is about us and what we can do.”

John Askey: “We’re confident but we’re not getting too ahead of ourselves and carried away, we know we’ve got to work hard whoever we play and it’s on the day, especially in the cup.”

Joe Mason is edging closer to a return and has a full week of training under his belt. Sam Nombe and Rhys Healey are progressing well, but the duo remain long-term absentees.

OFFICIALS
Craig Hicks will be the man in the middle today at Stadium MK.

Now in his eighth year as an official, Hicks last oversaw a Dons game back in Oct 2018 during the 3-0 defeat to Luton Town in the Leasing.com Trophy.

So far this season, Hicks has produced 32 yellow cards in 12 matches while he has sent off four players and awarded four penalties.

Ryan Whitaker and Hristo Karaivanov are the assistant referees with Llyod Wood will be the fourth official. Russ: Things to be happy with, things to improve on


Russell Martin saw signs of improvement from his MK Dons side in Saturday’s Emirates FA Cup tie with Port Vale, but also recognises there is still work to be done. 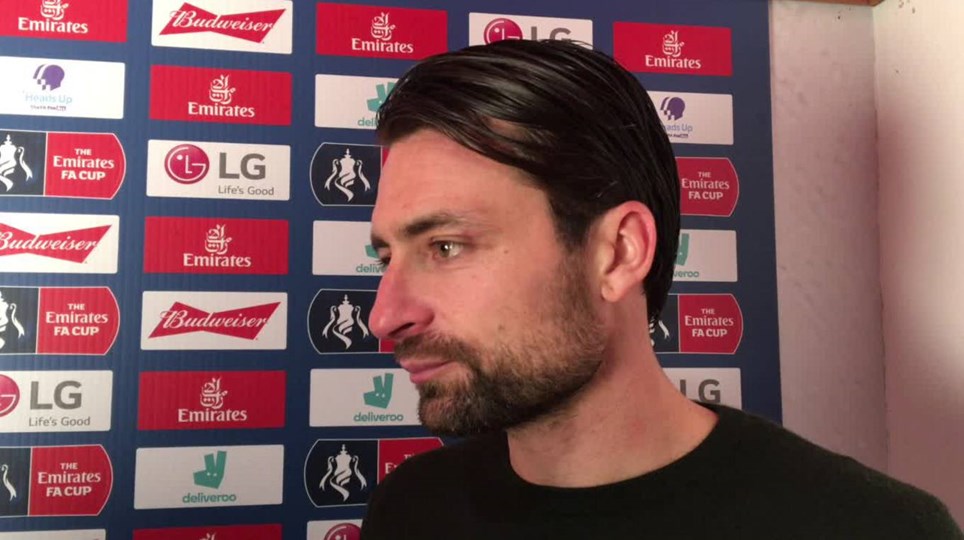 Worrall headed home a James Gibbons cross 19 minutes in, and despite a dominant display in front of the home crowd, Martin’s Dons were unable to find a way through the stubborn Valiants and maintain their place in the competition.

Boss Martin made three changes to the side in his first game as manager, recalling Jordan Bowery, Brennan Dickenson and David Kasumu to the starting XI. There was a place in the squad for Joe Mason for the first time this campaign, while second-year scholar John Freeman was also amongst the substitutes.

Martin’s side started bright, with Ben Reeves forcing a save out of Scott Brown inside the opening minute, following a neat attacking move straight from kick-off.

Port Vale responded a minute later, with Richie Bennett stinging the palms of Lee Nicholls with a fierce right-footed shot. Scott Burgess then dragged an effort wide after squeezing through challenges from Alex Gilbey and Conor McGrandles.

On the quarter-hour mark, Gilbey tried his luck from distance and saw his low drive tipped wide by Brown. Jordan Moore-Taylor flicked the resulting corner towards goal but it didn’t receive a crucial final touch from a teammate.

It was Port Vale who would break the deadlock, though, doing so with 19 minutes on the clock. A headed clearance from the back fell only as far as James Gibbons, whose cross was met at the far post by an un-tracked David Worrall and he headed past Nicholls. 0-1.

Seven minutes later, the Dons forced a corner which led to some strong penalty appeals for what the hosts determined to be a handball by a Port Vale defender. Nothing was given and Reeves ended up firing the loose ball over the crossbar.

Dickenson then had an opportunity from a free-kick, following a foul on him 30 yards from goal. He struck it left footed but couldn’t find the target from distance.

The Dons were dominating possession as they went in search of a way past the Valiants defence before half time.

Gilbey had a shot deflected wide on 36 minutes, following a driving run through the middle, shortly before Dickenson was dispossessed deep in the Vale box as he went to pul the trigger.

Amoo curled over on a rare breakaway forward from the visiting side, who should have scored a second in the final seconds of the first half – fortunately for the Dons, however, Bennett put his header over the bar from six yards out.

In search of an early second-half strike, the Dons won themselves a corner. The delivery was flicked on by Gilbey into the path of Bowery but he wasn’t able to divert his attempt on target.

A minute later, Reeves had a low drive gobbled up by Brown, before the Dons’ number 7 threaded through Dickenson, whose fierce strike flew just wide of the far post.

The chances kept coming from the Dons, with Callum Brittain the next to try his luck, sending a right-footed half-volley agonisingly wide from the edge of the area. Dickenson then struck wide with his left foot from similar range.

Martin went to the bench shortly after the hour mark and handed Mason his MK Dons debut in place of Jordan Bowery. His side then went close again through Gilbey, but his skidding strike was gathered by Brown.

The Dons had another golden opportunity to level when Moore-Taylor whipped in a cross from the left. Bowery couldn’t convert at the near post and Reeves blazed over after pouncing on the loose ball.

Hiram Boateng was Martin’s second substitution and he fired over shortly after coming on. His fellow sub Mason had the next opportunity – a first-time left-footed shot which was blocked by a Vale defender.

Jordan Houghton was the final roll of the dice for Martin, as he side pushed for a late leveller. He was soon involved in an attacking move which resulted in Mason having a shot deflect up into the arms of Brown.

Russ: Things to be happy with, things to improve on


Russell Martin saw signs of improvement from his MK Dons side in Saturday’s Emirates FA Cup tie with Port Vale, but also recognises there is still work to be done.