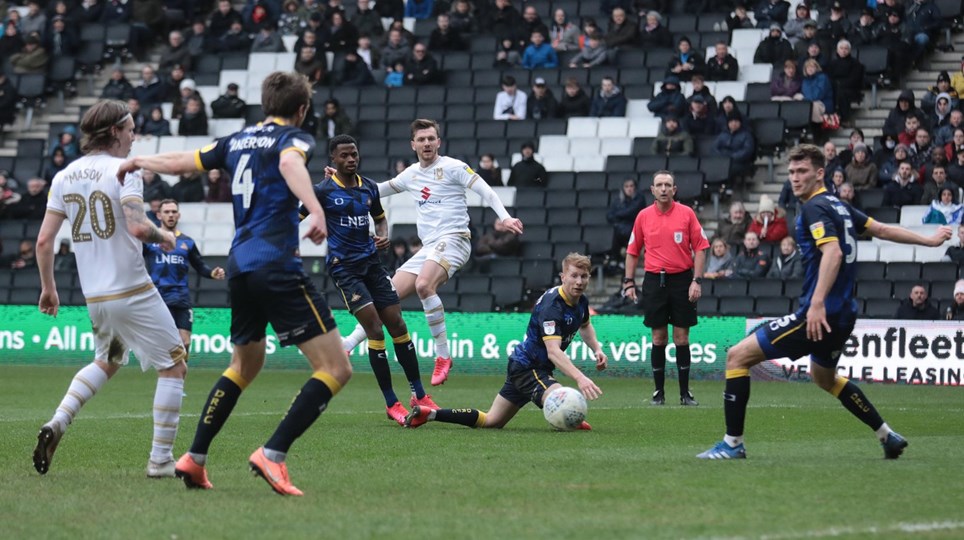 Jacob Ramsey’s second-half strike was the difference as MK Dons were beaten 1-0 by Doncaster Rovers at Stadium MK for only their second home defeat in eight matches.

Russell Martin’s men dominated much of the first half but couldn’t find a way past a stubborn Donny defence.

The visitors then snatched all three points with just over 20 minutes to play, as the Dons suffered a rare home loss and saw their gap over the bottom three in Sky Bet League One reduced to eight points.

Boss Martin made three changes to his starting XI, with Dean Lewington and Carlton Morris returning to the line-up along with midfielder David Kasumu. Joe Walsh, Regan Poole and Sam Nombe (ill) were the players who made way.

Kasumu looked energetic and bright early on and almost created a goal for the Dons inside the opening six minutes. The midfielder was alert to intercept Seny Dieng’s pass out from the back, and that provided Alex Gilbey with a chance to shoot – his first-time effort flew into the side netting.

The MK Dons number 8 had another opportunity moments later, after pouncing on Brad Halliday’s loose touch, but sent his right-footed try off target from the edge of the D. Healey then tried his luck with an attempt which was tipped wide by Dieng.

The chances kept coming for Russell Martin’s men, as Morris was the next to test Dieng with a low shot saved by the keeper’s feet at his near post. Doncaster then had their first real attempt of the match – an ambitious volley from Jacob Ramsey which sailed over.

Martin’s side went straight back on the attack and it took a crucial deflection by Ben Sheaf to prevent Healey’s first-time shot ending up in the back of the net from Callum Brittain’s cross.

Healey then almost turned provider, following some excellent combination play between him and Morris. The latter picked Healey out with a terrific cross-field pass, and after twisting and turning inside the area, the MK Dons number 10 delivered a ball across the face goal – one which Morris just couldn’t get a touch to.

The Dons’ in-form striker was finding his groove and another dazzling run almost led to the opening goal in the 38th-minute – he, however, fired wide with his left foot.

At the other end, Doncaster had a flurry of opportunities to close out the half, with former Don Devante Cole going closest with a glancing header that fell wide of the post. Neither side, though, could find a breakthrough before the interval.

It was the visitors who had the first opportunity of the second half – Ennis blazing over from close-range after being picked out by a cross the from the right.

A few minutes later, Martin made his first substitution of the afternoon and it was an attacking one – Joe Mason on in place of Kasumu.

Jordan Moore-Taylor got in the way of a shot from Ramsey just past the hour mark as Donny maintained their strong start to the second period. Ramsey had a second opportunity shortly after and with that, he broke the deadlock, firing home first-time from a low cross. 0-1.

Gladwin came off the bench with a quarter of an hour to play, in hopes of inspiring a comeback. He was involved as they went close a minute later – Healey a yard or two behind Gilbey’s ball across goal.

Nicholls pulled off a double save, the first of which was at point-blank range, to keep the deficit at one goal with 13 minutes left on the clock. Ben Reeves then entered the contest as Martin made one final roll of the dice.

The Dons pushed and pushed for late leveller and thought they'd found it late in stoppage time through Joe Mason, but he was denied by the legs of Dieng after latching onto Gladwin's lobbed pass.

Defeat then for Russell Martin's men, who will have to pick themselves up quickly ahead of a tough trip to Oxford United next weekend.