MK Dons welcome Rochdale to Stadium MK this evening, looking to secure an important three points in front of their home supporters.

Russell Martin’s men, who have one win and one draw to their name this month, sit one place and three points above the bottom three in the Sky Bet League One table, and will be looking to increase that gap tonight.

They could move to within a point of opponents Rochdale with a victory, while climbing above AFC Wimbledon in 19th if they fail to win at home to Burton Albion.

The Dons will lean on their recent home form under Martin, which saw them win three games in a row over the festive period. They scored a combined seven goals during that run and conceded just once.

THE OPPOSITION
Rochdale arrive in Milton Keynes with the opportunity to move 10 points clear of the bottom three with a victory.

Brian Barry-Murphy’s side have picked up just seven points from their last eight matches, but three of those came courtesy of an impressive away win at promotion-chasing Rotherham United back at the start of December. 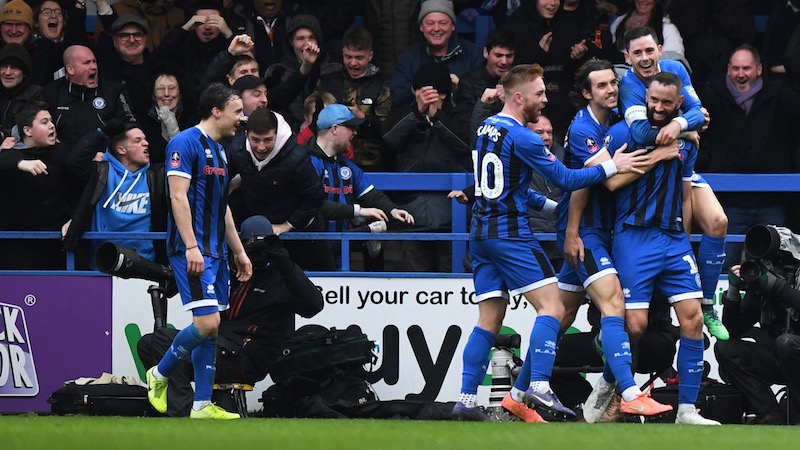 It’s on the road where Dale have been most impressive all season, collecting 16 points from 14 away fixtures – the sixth-best record in the division. Their five away wins is bettered by only Rotherham United and Ipswich Town.

Ian Henderson is their main danger man with an impressive 12 goals to his name so far this term. Callum Camps has contributed six goals from midfield while Aaron Morley and Stephen Dooley are regular contributors.

LAST TIME OUT
A stunning strike from Lynden Gooch saw MK Dons beaten 1-0 by Sunderland at Stadium MK 10 days ago.

Russell Martin’s side dominated the first half but saw the Black Cats respond in the second.

Sunderland’s second-half pressure finally told when Gooch struck from 20 yards to seal victory and condemn the Dons to their first home defeat in four games.

Rochdale were in action this past weekend, earning a point at home to Gillingham courtesy of a 2-2 draw.

Dale took the lead from the penalty spot after Rhys Norrington-Davies was brought down by the Gillingham goalkeeper. The Gills, though, equalised before half-time through Jordan Roberts.

Roberts netted a second after the break to edge the visitors in front but Rochdale secured a share of the spoils in the 68th minute through a fantastic Stephen Dooley finish.

FIGHTING TALK
Russell Martin: “I'm respectful of Rochdale, their manager and how they play. We've watched quite a bit of them and, on their day, they're really, really good and they can pass it around as well as anybody in this division.”

Lee Riley: “The preparation for the game will be mainly recovery for the players and starting to look at MK Dons and how they play, and how we play against them. We don’t look at the game in regard to the league table. We’ll just prepare for it as we would do any other game and as we always do.”

TEAM NEWS
MK Dons hope to have Alex Gilbey available for selection after the midfielder missed the defeat to Sunderland with a knee problem. Gilbey pulled out during the warm-up prior to the clash with Sunderland at Stadium MK but is expected to be involved tonight.

Rochdale have two injury doubts in the form of Callum Camps and Robert Sánchez.

Midfielder Camps is expected to miss out with a groin injury while on-loan goalkeeper Sánchez could return from a similar issue after receiving treatment at his parent club.

OFFICIALS
Charles Breakspear will run the rule over tonight’s affair at Stadium MK.

The Surrey official has brandished 100 yellow cards in 23 matches this term, while also dismissing 12 players. 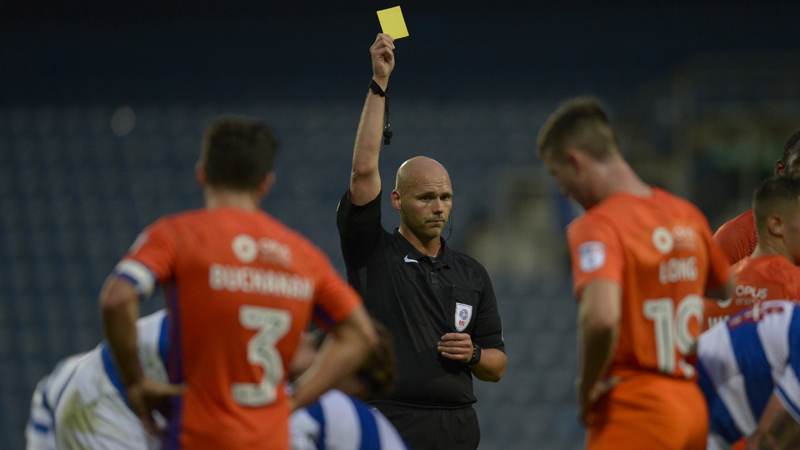 One of those 12 red cards came when he took charge of the Dons’ Leasing.com Trophy tie with Coventry City back in November. That evening, he also brandished five yellow cards.

His assistant referees are Michael Webb and Louis Marks while the fourth official is Ollie Williams.

Can't make this evening's match? Not to worry, you can watch the game live on iFollow MK Dons for just £10 - click HERE to purchase a Video Match Pass! 
Despite scoring the equaliser and picking up the Man of the Match award in Tuesday’s 2-1 win over Rochdale, Carlton Morris insists that winning games is all that matters to him. Russ: Rochdale was a big win for us


Russell Martin wasn’t hiding from the fact that Tuesday’s victory over Rochdale was a crucial one for his MK Dons side. 
Russell Martin reserved individual praise for several of his stars from Tuesday’s victory over Rochdale. 
Carlton Morris marked his 150th career appearance with a goal in Tuesday’s 2-1 victory over Rochdale.

Rhys Healey scored a stoppage-time penalty as MK Dons came from behind to beat Rochdale at Stadium MK.

Russell Martin’s men trailed to Ian Henderson’s early close-range finish but levelled through a Carlton Morris header five minutes into the second half.

The game appeared to be heading for a draw until Charles Breakspear awarded the Dons penalty three minutes into stoppage time. Healey stepped up and converted in front of the Cowshed, sending his side six points clear of the bottom three in Sky Bet League One.

Boss Martin welcomed Alex Gilbey back to the starting XI after he missed the defeat to Sunderland due to a knee injury. He replaced Joe Mason who, himself, was sidelined through injury, as was Conor McGrandles who saw his spot taken by Louis Thompson. The other change saw Jordan Moore-Taylor come in for Joe Walsh at the back.

The Dons started well, with a move down the right leading to a chance for Callum Brittain, who curled over from the edge of the area. Rochdale went closer, though, five minutes later – forward Tyler Smith firing into the side netting after beating the offside trap.

A quick counter attack from Dale provided an opportunity for Henderson on the quarter-hour mark but his effort was deflected wide off George Williams. From the resulting corner, the visitors broke the deadlock – Henderson prodding home at close-range from Eoghan O’Connell’s flick on. 0-1.

Martin’s men had an opportunity to respond four minutes later from a free-kick, after Healey was brought down five yards from the edge of the box. Morris took the set-piece and saw his effort blocked by the wall.

Morris was involved again on 25 minutes, driving down the left before teeing up Alex Gilbey, who took a heavy touch inside the area. Rochdale fired back with Ollie Rathbone trying his luck from range – Nicholls made the save.

Nicholls’ opposite number, Lynch, was called into action for the first time to keep out Callum Brittain’s low drive. Lynch claimed the parry before Gilbey could pounce. Healey then had the final chance of the first half, curling a shot into the arms of Lynch from 25 yards.

Martin made a substitution at the break, replacing Kasumu with Sam Nombe and the striker had a positive impact, as the Dons made a strong start to the half.

They were rewarded for that positive beginning with a goal four minutes in. Rochdale did well to deal with three corners sent into the box but the fourth, delivered in by Houghton, resulted in Morris flicking a header past Lynch – his second goal for the Dons. 1-1.

Healey went close to putting his side ahead on the hour after latching onto Nicholls' long ball forward. He showed great skill to create room for a shot but had his effort deflected wide of the goal.

Rochdale soon went close at the other end with Stephen Dooley dragging a low shot just wide of the left-hand upright before Martin made his second change of the evening – Ben Gladwin on for Thompson, who had run himself into the ground in his first start for the Dons.

On 71 minutes, Morris found the run of Nombe with a through ball but the striker had his curling effort gathered by Lynch. Shortly after, Brittain crashed a strike against the stantion behind the goal, after missing the right-hand corner by an inch.

Gilbey also tried his luck from distance, but his attempt was saved by Lynch. He went for goal again moments later but couldn’t find a way past the Dale stopper for a second time.

Lynch produced another stop with 12 minutes to play, this time keeping out Healey’s bending strike. At the other end, Nicholls got behind a drive from Rathbone and made the save.

The Dons had a great opportunity with 82 minutes on the clock after Lynch palmed a Nombe ball into the mix. Both Healey and Morris had swipes but neither could find enough contact to trouble the goal.

Healey had another fantastic chance moments later after latching onto a superb through ball from Gladwin. The striker took a touch inside the area but failed to hit the target with his effort.

The game appeared to be heading for a draw until the third minute of stoppage time when Healey was brought down in the box. Referee Charles Breakspear pointed straight to the spot and that provided the MK Dons number 10 with one final opportunity to win the match – which he did, sending his spot kick straight down the middle. 2-1.


Despite scoring the equaliser and picking up the Man of the Match award in Tuesday’s 2-1 win over Rochdale, Carlton Morris insists that winning games is all that matters to him.

Russ: Rochdale was a big win for us


Russell Martin wasn’t hiding from the fact that Tuesday’s victory over Rochdale was a crucial one for his MK Dons side.


Russell Martin reserved individual praise for several of his stars from Tuesday’s victory over Rochdale.


Carlton Morris marked his 150th career appearance with a goal in Tuesday’s 2-1 victory over Rochdale.