MK Dons travel to Burton Albion this evening with the opportunity to move six points clear of the bottom three in Sky Bet League One.

Russell Martin’s men have worked themselves three points ahead of 21st-place Tranmere Rovers, following a run of only one defeat in seven games.

One of Sky Bet League One’s form teams, the Dons could extend that gap with a victory at the Pirelli Stadium tonight and move to within six points of 13th spot in the table.

A success would also make it three wins out of four in the league for Martin’s side – a contrast to their previous record of three wins in 15 matches.

Kick-off in Staffordshire is at 7.45pm.

THE OPPOSITION
Burton Albion are also enjoying excellent form and could move into the play-off places with a win over the Dons tonight.

The Brewers have won four of their last five league encounters, scoring 14 goals and conceding only six times. 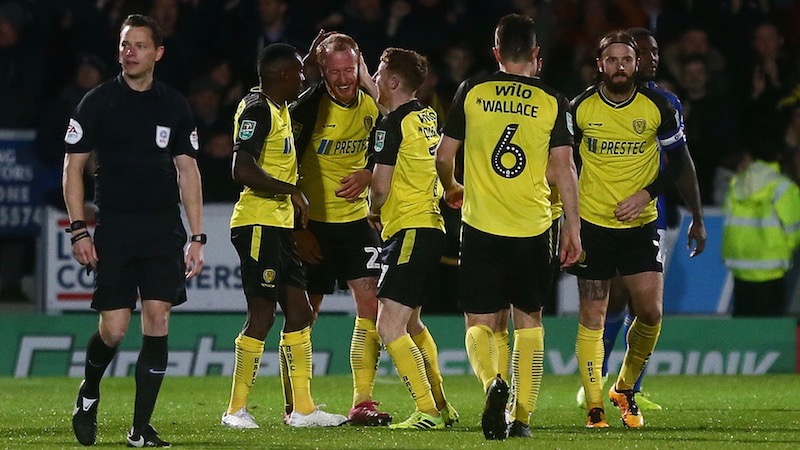 Three of those triumphs came at home, where the Staffordshire outfit have enjoyed five total victories this term and only conceded eight goals – the best defensive home record in the division.

Lukas Akins and Liam Boyce are Albion’s main marksmen – they each have seven league goals to their name in 2019/20. Scott Fraser has contributed five goals from midfield.

The Sky Blues took the lead less than 50 seconds in, with Sam McCallum finding the net from distance with a dipping half-volley.

Morris, though, came off the bench to secure a share of the spoils for his new side - the Norwich City loanee firing home after Coventry failed to deal with Sam Nombe's low cross.

Burton Albion scored an 89th-minute winner to snatch all three points in their Sky Bet League One clash with Fleetwood Town on Saturday.

Ryan Edwards proved to be the late hero as he glanced home a header from Liam Boyce's cross to earn victory.

Burton, arguably, had the better of the chances throughout the game but it took for the Australian midfielder's sixth of the season to seal their fourth win in five league games.

FIGHTING TALK
Russell Martin: “It feels like we're growing, building and learning together. I think we can be as good as any team in this division. It won't be easy and we'll continue to have some ups and downs. We need to move away from the relegation zone, first and foremost, but we're slowly clawing our way up.”

Nigel Clough: “We have won four out of our last five league games and we go into Tuesday night in good spirits. It is a massive game for us as if we can get three points that puts us even closer and then we have a ten-day break before another home game. Knowing we could be in the top six if results go our way is an incredible incentive for us.”

TEAM NEWS
MK Dons will assess Alex Gilbey ahead of kick-off after the midfielder limped out of the draw with Coventry City. Otherwise, Russell Martin appears to have a fit squad to choose from, with Jordan Moore-Taylor back involved after time on the sidelines with a knee problem.

Defender Colin Daniel and midfielder David Templeton were both forced off at the weekend and could miss out this evening as a result.

Centre-back Kieran Wallace didn’t play on Saturday due to illness but may return. Burton’s new signing Conor Shaughnessy could, however, miss out on making his debut due to a hamstring injury.

The Durham-based official has taken charge of 21 matches this season and has produced 60 yellow cards. He has only sent off two players, however, and only awarded four penalties. 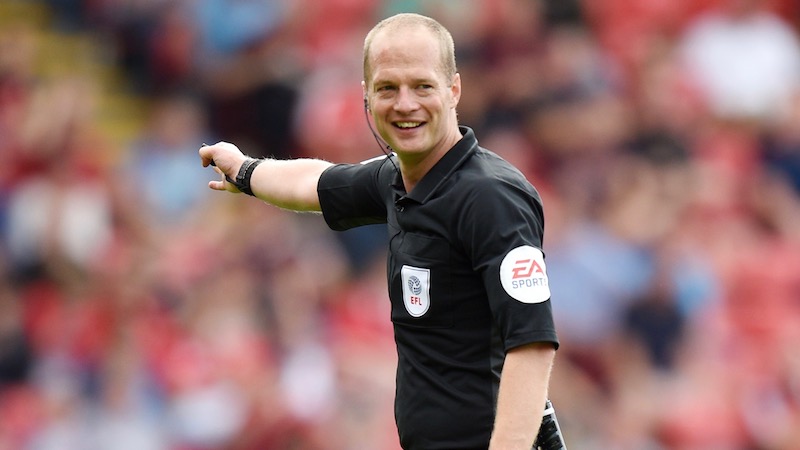 The last time he oversaw an MK Dons fixture was back in March, when he booked three players during the 1-1 draw with Stevenage at Stadium MK. His most recent Burton appointment was a month previous to that – their 0-0 draw with Barnsley on a day where only two yellow cards were shown.

His assistant referees are Steven Plane and Matthew Bristow while the fourth official is Richard Woodward.

FOLLOW IT LIVE
Tickets for tonight's game are priced at £24 adults, £22 seniors/under-23s and £14 under-17s. Tickets can now only be bought at the Pirelli Stadium ahead of kick-off.

Can't make this evening's match? Not to worry, you can listen to live commentary on iFollow MK Dons for just £2.50 - click HERE to purchase an Audio Match Pass! Cal: Improvement in play under Russ is clear to see


Callum Brittain has labelled the improvement MK Dons have made under Russell Martin as ‘outstanding’ before adding coming away from Burton unrewarded was ‘frustrating’. 
Russell Martin was left feeling disappointed and frustrated after his side’s dominant performance at the Pirelli Stadium went unrewarded. 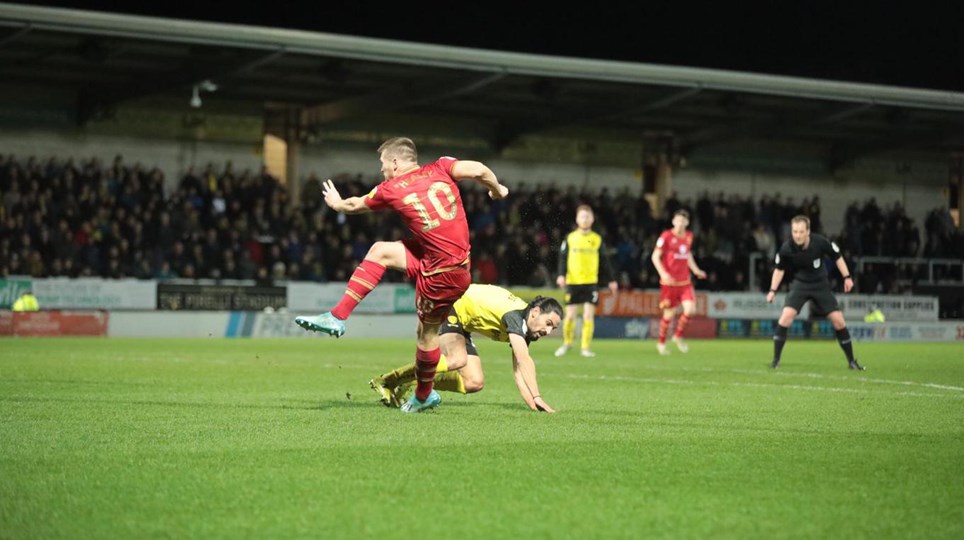 Boyce struck and won the game with the Brewers only real chance on goal, as Russell Martin’s men failed to make their 71 per cent possession count in Staffordshire.

The defeat – only the Dons’ second in eight matches – keeps them 19th in the Sky Bet League One table, three points adrift of the bottom three.

Boss Martin made one change from the starting XI which drew 1-1 with Coventry City, handing Carlton Morris his first start as an MK Dons player in place of David Kasumu. There was also an alteration on the bench, with Baily Cargill replacing Ben Reeves.

Burton started well but the Dons managed to deal with the early pressure – Lee Nicholls getting a strong hand to one low ball into the box. Martin’s men had an early opportunity of their own, a minute later - Rhys Healey testing Kieran O’Hara with a low, left-footed drive.

Nicholls was called into action again on five minutes to deal with an effort from Liam Boyce - the MK Dons number one got down well to palm away the fizzing strike. Joe Sbarra followed up soon after with a shot of his own, which he dragged well wide.

A well-worked move out from the back provided Healey which another chance to threaten an opener but the striker bent his effort past the far post. Less than a minute later he forced O’Hara into a save with a first-time shot from Callum Brittain’s cross.

Gilbey was the next to go close for MK Dons with a deflected 18-yard drive which flew just wide of the post. Joe Mason and Morris then had goal-bound attempts blocked as Martin’s side continued to threaten.

Burton then offered a reminder of their threat as Sbarra produced a diving save out of Nicholls from the edge of the D. The Dons responded through Mason, who saw a header kept out by O’Hara following a terrific long ball forward by Lewington.

It was the hosts, though, who would open the scoring 20 minutes in through Boyce, who collected a pass from Nathan Broadhead inside the area and fired a low shot past Nicholls. 1-0.

MK Dons pushed for an instant response and Healey soon saw a fierce strike blocked by a defender on its way through to goal. Morris also tried his luck but had his attempt deflected wide from 20 yards out.

Martin’s men went agonisingly close to an equaliser with 26 minutes on the clock as Conor McGrandles struck the crossbar direct from a free-kick. Gilbey’s follow-up was blocked.

Brittain then produced a moment of magic down the right, working his way deep into the Burton box, before seeing his strike turned behind. Mason then had a shot blocked as the home team continued to throw their bodies in the way of anything coming in from the Dons.

The home team did enough to see out the remainder of the first half, despite surrendering 71 per cent of the possession to their visitors, who went straight on the offensive at the start of the second half – Healey firing over after latching onto McGrandles’ through pass.

On 53 minutes, Morris shot wide with a shot on the turn, before the number 23 had an effort saved at point-blank range by O’Hara, after being picked out in the box by Brittain. He also directed one just wide from a Lewington corner on the hour.

Martin’s first change saw Sam Nombe come on to replace McGrandles. The striker, nor his teammates, were able to get on the end of a teasing Brittain cross which came in soon after the change.

Ben Gladwin then came on to join the attack in place of Houghton. He sent an early ball into the area, which Morris did well to meet – he couldn’t, though, direct his header on target. The number 17 also tried his luck from 25 yards out but sent his right-footed attempt over the crossbar.

The Dons kept huffing and puffing late but weren’t able to make their dominance pay with a late goal. A positive performance, though, for Martin and his side to take into their Stadium MK clash with Sunderland on Saturday.

Cal: Improvement in play under Russ is clear to see


Callum Brittain has labelled the improvement MK Dons have made under Russell Martin as ‘outstanding’ before adding coming away from Burton unrewarded was ‘frustrating’.


Russell Martin was left feeling disappointed and frustrated after his side’s dominant performance at the Pirelli Stadium went unrewarded.