Joe Walsh was happy to come away from Rotherham United with a point given the home sides recent form and the unpredictable windy conditions. 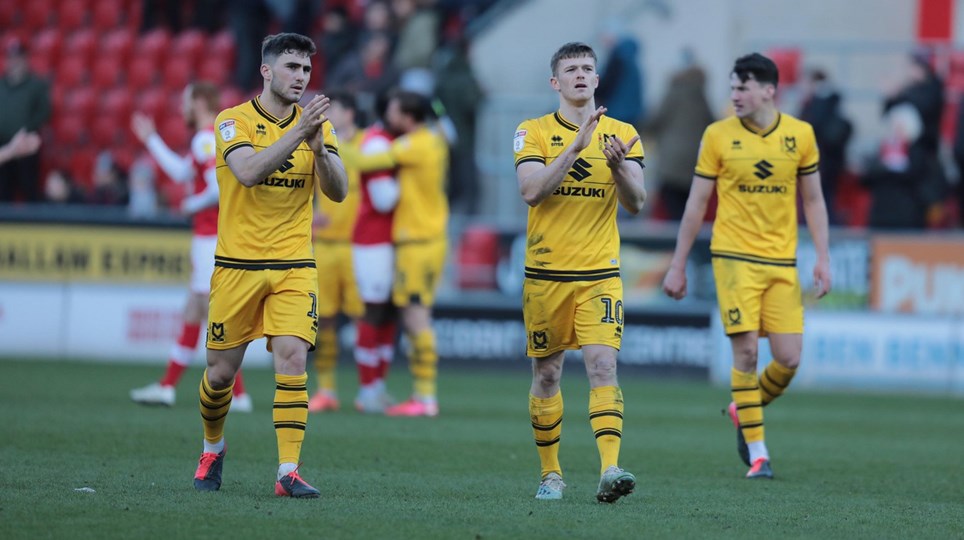 MK Dons came from behind to earn a point at the home of the Sky Bet League One leaders.

Top-of-the-table Rotherham United took a 10th-minute lead through Freddie Ladapo but Rhys Healey levelled the scores midway through the first half with his sixth goal in seven games.

Russell Martin’s men remain 18th in the Sky Bet League One table but extend their gap over the bottom three to 11 points.

Boss Martin made three changes to his starting XI, two of which were enforced. Captain Dean Lewington was unavailable following the birth of his daughter, Lottie, late on Friday night – he was replaced by Joe Walsh. The other two alterations saw Callum Brittain and Sam Nombe come in for Conor McGrandles and the suspended Carlton Morris.

The Dons started well, looking to get behind the Rotherham United backline as quickly as possible. Sam Nombe had two early opportunities to latch onto balls but was denied, on both occasions, by an alert Daniel Iversen.

It was Rotherham, though, who would strike first 10 minutes in. A ball over the top was pounced on by Ladapo, and he cut inside, onto his right, before drilling a low into the bottom left-hand corner. 1-0.

Nicholls was called into action on the quarter-hour mark to keep the deficit at just the one goal – the MK Dons number 1 got down to his left to parry away Jamie Lindsay’s strike. Ben Wiles headed over shortly after.

After those chances were over, Martin’s men started to settle into the match and they drew themselves level on 21 minutes.

A ball forward from Walsh was misjudged by Matt Olosunde, which allowed Healey in-behind the Millers backline. He took the ball into the area before twisting and turning to create space for a shot – a shot which he sent into the top right-hand corner with his left foot. 1-1.

Rotherham almost responded instantly from a corner but Matt Smith’s header fell wide of the post. Ladapo had a headed attempt of his own, from a later corner, but that too was off target – as was Richard Woods’ effort on the half-hour.

Their best chance of restoring the lead before the break came with three minutes to play in the half, through Smith, but his header was kept out by a stunning save from Nicholls at point-blank range.

It took both sides time to get going in the second half but the first real chance of note, 57 minutes in, should have resulted in a goal. However, Ladapo somehow failed to find the target with the goal at his mercy – hitting the post from no more than six yards out.

Gilbey at the Dons’ first shot of the second half – a right-footed try from 25 yards out which sailed off target. Moments later, Martin had his first two substitutions – replacing Thompson and Brittain with David Kasumu and Ben Gladwin.

Rotherham threatened again with just over quarter of an hour to play but Smith headed wide when well placed inside the area. Ladapo looped a header over himself a minute later.

Joe Mason was Martin’s third and final change – he replaced Nombe up top on 80 minutes. Shortly after Mason’s arrival, Wiles was a whisker away from putting his team in front but his curling effort flew wide of the post.

With four minutes to play, the Dons had an opportunity to snatch all three points but Gladwin’s effort was deflected and then tipped over the bar by Iversen.

As the game moved into stoppage time, Rotherham were the team piling on the pressure but it was the Dons who would go closest to winning it – Gilbey, racing through one-on-one but seeing his shot saved by the legs of Iversen.

Martin’s men were then forced into defending long balls into the area for the remainder of the contest, which they did superbly to take an important point with them back to Milton Keynes.


Joe Walsh was happy to come away from Rotherham United with a point given the home sides recent form and the unpredictable windy conditions.