MK Dons host Oxford United this Saturday as they look to build upon their draw against Doncaster Rovers last weekend.

Russell Martin's side put in perhaps their performance of the season at The Keepmoat Stadium, but were denied three points by a late Doncaster Rovers goal.

Martin, however, will be looking to turn the positive performances into wins as he looks to reap the rewards of the good football his side have been playing.

The visitors to Stadium MK this weekend are Oxford United, who are currently one of the most inform teams in the league.

THE OPPOSITION
Oxford United will currently sit seventh in the Sky Bet League One table, just one point off Coventry in sixth and six points off Ipswich Town in second.

The U's are unbeaten in their last 11 league fixtures, a run that stretches back to September 14th. During that time, Karl Robinson's side have beaten the likes of Lincoln City, Rotherham, Tranmere Rovers and Gillingham.

They are also one of the top scorers in the Football League, having netted 37 goals from their 18 league games. James Henry has been their standout player in front of goal so far this season, he's netted 10 goals and provided a further five assists. Elsewhere, Tariqe Fosu-Henry has eight goals, Matty Taylor netted seven and Cameron Brannagan has six.

LAST TIME OUT
MK Dons put an end to their losing streak in Sky Bet League One by taking a point from Doncaster Rovers at the Keepmoat Stadium.

Alex Gilbey struck from 25-yards to give Russell Martin’s men a deserved lead early in the second half but Donny levelled the scores late on through a controversial Cameron John goal.

Oxford United, meanwhile, extended their unbeaten Sky Bet League One run to 11 games as they drew 0-0 with Shrewsbury Town.

FIGHTING TALK
Russell Martin: “The position we're in, they're all tests. But the focus should be on us and what we can do. We're at home, it's our territory, it's up to us to dominate and impose ourselves on the game, how we can hurt the opposition and how we can prevent them hurting us.”

TEAM NEWS
MK Dons were boosted by the return of Sam Nombe last week. The striker played the final 20-minutes at Doncaster Rovers, before featuring for an hour in the Under-23s clash with Cambridge United.

Russell Martin provided injury updates on both Jordan Moore-Taylor and Rhys Healey - the duo missed the 1-1 draw with Doncaster Rovers through injury.

“Jordan is having checks on his knee this week. He felt his knee in the warm-up. He hadn’t felt it since his operation until Saturday. He says he’s feeling okay so hopefully it's just a little irritation rather than something major. We'll make sure we investigate it properly, though.”

On Rhys, Martin said, "He's getting fitter. He has a lot to catch up on but he's getting there slowly. We’ll need to get him some minutes soon. We've got a few reserve games coming up which will probably be used for that."

The Rutland native has been an official since the 2002/03 season and has overseen the Dons just once this season. That came in the 3-2 defeat to Wycombe Wanderers, where he awarded three penalties.

So far this season, Kettle has overseen 16 matches, produced 48 yellow cards and four reds. He has also awarded nine penalties.

Nicholas Cooper and Paul Hobday will be the assistant referees while Paul Kelly is the fourth official.

You stay in touch with the action via mkdons.com’s Match Centre, which can be accessed by visiting the home page from 2pm. Poole: Oxford win what we deserved


Regan Poole felt three points was nothing less than MK Dons deserved for their display in last weekend’s Sky Bet League One clash with Oxford United. Russ’ pride as Dons get back on the winning trail 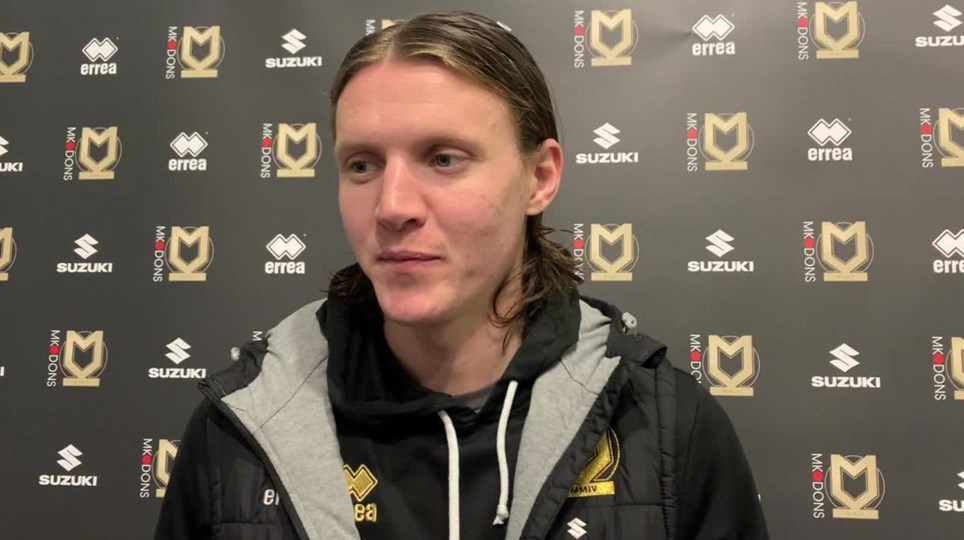 Joe Mason’s excellent second-half strike – his third goal in four games – proved to be the difference, as Russell Martin secured his first league win as manager.

It’s a result which sees the Dons move level on points with 20th place in Sky Bet League One, with a trip to Gillingham on deck next weekend.

Boss Martin named an unchanged side from the one that drew 1-1 with Doncaster Rovers last weekend. Regan Poole was drafted in late at the Keepmoat Stadium to replace centre-back in place of Jordan Moore-Taylor, who missed out once again because of a knee issue.

On the bench, there was a return for Rhys Healey – his first appearance in the squad since 14 September. He took the place of fellow striker Sam Nombe, who was sidelined through illness.

Oxford won themselves a corner after just a minute of game action but their delivery from the left was dealt with by Martin’s men.

The Dons threatened for the first time three minutes later. After some nice play down the left, Gilbey got to the by-line, but saw his low cross for Joe Mason intercepted.

A similar move down the right almost led to the first goal but Hiram Boateng’s pass for Agard was diverted away from the awaiting striker via the slightest of touches from a U’s defender.

The chances kept coming for the hosts, with Mason the next to try his luck. A cross-field pass led to the opportunity, which the Dons number 20 bent wide of the left-hand post from the edge of the area.

Mason went close again on 24 minutes, letting a pass from Gilbey roll across his body 20 yards from goal before firing a right-footed drive which drifted just a yard or two wide. Agard then saw a right-footed attempt of his own blocked, after being teed up by Conor McGrandles inside the box.

With five minutes to play, the Dons won themselves a corner from which Gilbey volleyed over. They had another chance late in the half – a free-kick following a foul on McGrandles five yards from the edge of the area. Lewington took it, but couldn’t keep his effort down.

Martin’s men returned for the second half just as bright, with Lewington sending an early cross into the box – one which was headed away by Alex Gorrin just in front of McGrandles.

It took them, though, until the hour mark to take a deserved lead. Boateng had an curling effort deflected into the path of Mason, who took a touch away from a U’s defender inside the box before lashing a 12-yard shot into the top right-hand corner of Archer’s net. 1-0.

Oxford responded and put the Dons under immediate pressure deep inside their own half. Martin’s men though were holding firm, although there were plenty of nervy moments – including several penalty appeals.

Martin made his first substitution with 20 minutes left to play – Reeves replacing Boateng in midfield. One of Oxford’s subs, Shandon Baptiste, soon went close with a low drive which was blocked well by Houghton.

Some terrific skill and composure from McGrandles prevented another U’s attack and almost created a second goal for the Dons – however, Gilbey’s eventual drive drifted wide.

Bowery was Martin’s second substitution. He came on with seven minutes to play in the spot of Agard. Kasumu soon followed, with minutes left on the clock.

The Stadium MK crowd was right behind the Dons has they fought tooth and nail to hold onto their lead.

They had to survive two stoppage-time corners as well as several direct balls into the box – and they did, handing Russell Martin his first league victory as MK Dons manager and the side’s first since 14 September.

Poole: Oxford win what we deserved


Regan Poole felt three points was nothing less than MK Dons deserved for their display in last weekend’s Sky Bet League One clash with Oxford United.

Russ’ pride as Dons get back on the winning trail

Tickets for the Sky Bet League One fixture with Oxford United will be available to buy right up until kick-off at Stadium MK.

Russell Martin's men take on Oxford United in the build-up to the Christmas period. Kick-off is at 3pm on Saturday, December 14th.

Tickets are priced at £22 adults, £17 seniors and £7 under-18s while under-12s go FREE with an accompanying adult.

SEASON TICKET HOLDERS
During the 2019/20 campaign, Season Ticket holders are entitled to one FREE upgrade to clubRed; a £25 upgrade to clubGold; and a £55 upgrade to clubPlatinum. Offer only available on league games, subject to availability.

PARKING
Car parking at Stadium MK is priced at £7.

Disabled parking requests should be emailed to customer.services@mkdons.com.