MK Dons travel to Gillingham this Saturday in the final fixture before Christmas as they look to extend their unbeaten run to four games in all competitions.

Russell Martin's side backed up their draw with Doncaster Rovers with all three points after overcoming Oxford United at Stadium MK last Saturday.

Joe Mason scored the only goal of the game as the Dons picked up a crucial three points in a game where the defence stood firm and the midfield and forwards created a number of chances.

Martin and his side will make the journey to Kent this weekend as they look to continue their impressive spell under the new manager.

THE OPPOSITION
Gillingham currently sit seventh in the Sky Bet League One table, they are just six points off a play-off place and eight points ahead of MK Dons. The Gills have won five of their ten home fixtures this season, they've also lost four and drawn once at the MEMS Prestfield Stadium.

Currently overseeing proceedings in the dugout for Gillingham is Steve Evans who has been in charge since June 2019. The 57-year-old made a number of new signings in the Summer, including former Don Ousseynou Cisse who joined following the expiration of his contract at Stadium MK.

Elsewhere the likes of Stuart O'Keefe, Lee Hodson, Mark Marshall, Matty Willock and Ben Pringle all put pen to paper on pernament deals with the club.

Joe Mason’s excellent second-half strike – his third goal in four games – proved to be the difference, as Russell Martin secured his first league win as manager.

Gillingham, meanwhile, picked up a point from their trip to Fleetwood Town. Paddy Madden had given Fleetwood the lead on 52-minutes, but Alex Jakubiak's late goal gave Steve Evans' side a point.

FIGHTING TALK
Russell Martin: “We’re going to need everyone over Christmas period. Tuesday has given me great confidence in the squad the knowledge that if needed, people are ready to step in and take the place. That’s a healthy thing for a manager when you're fighting to move up the table.”

TEAM NEWS
MK Dons duo Sam Nombe and Rhys Healey both featured for 45-minutes during Tuesday's Under-23 clash with Southend United and could challenge for a spot in the squad this weekend.

"Obviously Sam and Rhys played 45 minutes each. Sam scored and played really well. Rhys has still got a bit of catching up to do in terms of his fitness but I’m really pleased with both of them. They’re working extremely hard and now it’s about getting them back on the pitch."

Elsewhere, George Williams is back in contention having served a three-game suspension following his red card against Bolton Wanderers.

The Essex native has been an official since the 2007/08 season and is yet to oversee the Dons this season. The last time he officiated a Dons game came in April 2018 during the 2-1 defeat to Doncaster.

Michael Webb and Mike Desborough will be the assistant referees while Andrew Aylott is the fourth official.

FOLLOW IT LIVE
Tickets are available in covered or uncovered seating areas, with prices from £20 adults, £16 seniors and £6 students/under-18s, while under-12s go FREE. Ticket prices will increase by £2 on the day of the game.

Official Away Travel is available for this fixture, with coach spaces priced at £19 Season Ticket holders and £20 all other supporters. Coaches will depart Stadium MK at 9am.

You stay in touch with the action via mkdons.com’s Match Centre, which can be accessed by visiting the home page from 12pm. 
Russell Martin and goalscorer Alex Gilbey both praised the impact Sam Nombe had off the bench in Saturday’s Sky Bet League One clash with Gillingham. 
Russell Martin and his MK Dons side were made to rue a lacklustre first-half after they were beaten 3-1 by Gillingham at the MEMS Priestfield Stadium. 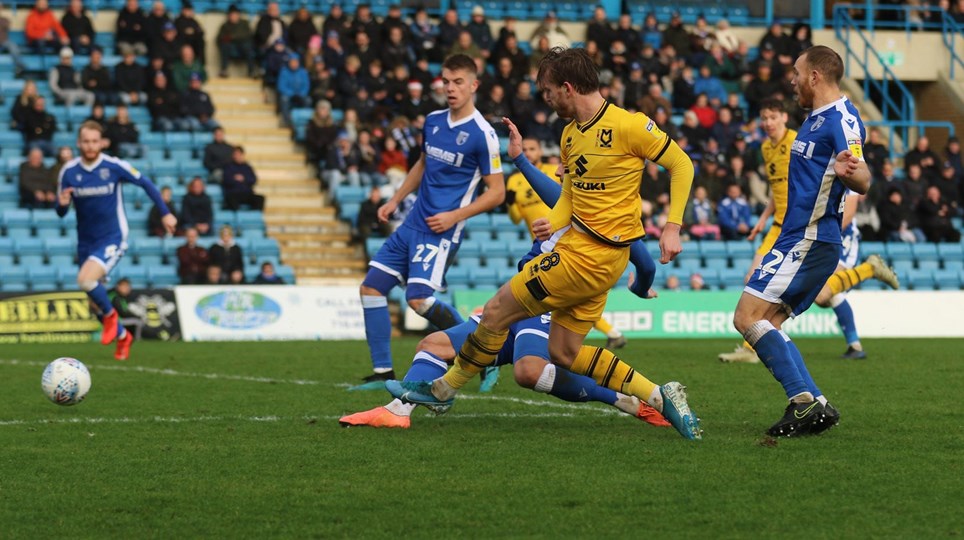 MK Dons failed to build on their win over Oxford United as they were beaten 3-1 by Gillingham at the MEMS Priestfield Stadium.

Two goals in two first-half minutes from Mikael Mandron and Brandon Hanlan did most of the damage although the Dons did pull one back early in the second period courtesy of Alex Gilbey’s third goal in five games.

However, Max Ehmer struck just four minutes later to restore the two-goal advantage which the Kent side were able to maintain through until the final whistle.

Boss Martin named an unchanged starting XI from the side which beat Oxford United 1-0 at Stadium MK. There was, though, a return for striker Sam Nombe, who missed the win due to illness – he was amongst the substitutes along with George Williams back from suspension.

Gillingham started bright and worked their way into the MK Dons penalty area inside the opening minute. Jack Tucker had an effort on goal which was blocked by Dean Lewington.

It took the Dons some time to get going but they eventually found their groove and began controlling the tempo of the game with their possession-based football. It almost led to a chance on 14 minutes but Callum Brittain couldn’t find space to pull the trigger inside the box.

The first shot on target in the game didn’t arrive until the 21st minute. It was Oliver Lee with the right-footed strike that Lee Nicholls got a right arm to. The hosts had the next attempt to, eight minutes later – a drive from former Don Stuart O’Keefe which was blocked by Brittain.

Gillingham looked the more likely to open the scoring and they did so on the half-hour mark through Mandron, who met an Oliver Lee cross at the near post and glanced a header over Nicholls and into the far corner of the net. 1-0.

The home side then quickly doubled their lead, thanks in part to a mistake from the linesman in not spotting an offside in the build-up to Hanlan’s low finish under Nicholls. 2-0.

In search of an instant response, the Dons won a free-kick 30-yards from goal. However, Dean Lewington’s ball in was comfortably gathered by Jack Bonham. They certainly managed to weather the storm but weren’t able to muster another opportunity before the half-time whistle.

Martin made a double substitution at the break, introducing both Nombe and Jordan Bowery from the bench in place of Boateng and Agard. The switch certainly provided a spark and within seven minutes, his side had reduced the deficit.

Nombe was involved, winning an aerial challenge on the left flank. The ball eventually fell to Gilbey, who did the rest – lifting the ball over his marker before driving deep into the are and firing a low shot past Jack Bonham. 2-1.

Their joy, however, was short lived as Gillingham restored their two-goal advantage within four minutes of the re-start. The hosts were awarded a free-kick, five yards from the edge of the penalty area, and while Nicholls did well to keep out the initial effort from Oliver Lee, he wasn’t able to stop Ehmer’s follow-up. 3-1.

Martin’s men responded well but weren’t able to create a shooting chance until Gilbey sent a low drive into the arms of Bonham from 25 yards out on 69 minutes.

Mason followed up with a left-footed curler which skidded just wide of the left upright, shortly before Nombe sent a long-range effort over.

The Dons’ final change arrived with less than a quarter of an hour left to play, as Reeves replaced McGrandles in midfield. He was picked out by Nombe shortly after coming on but was unable to bring the ball under control inside the box.

A decent opportunity fell the way of Bowery late on but he wasn’t able to get connection with a loose ball, after Bonham had parried Gilbey’s effort from distance.

That proved to be the final glimmer of hope for the Dons, who will have to pick themselves up ahead of their crucial trip to Southend United on Boxing Day.


Russell Martin and goalscorer Alex Gilbey both praised the impact Sam Nombe had off the bench in Saturday’s Sky Bet League One clash with Gillingham.


Russell Martin and his MK Dons side were made to rue a lacklustre first-half after they were beaten 3-1 by Gillingham at the MEMS Priestfield Stadium.