Paul Tisdale believes Sam Nombe is a fine example of why it’s important for young players to show patience in their pursuit of first-team football. 
Paul Tisdale was pleased with the way in which his side secured their place in Round Three of the Carabao Cup. 
Stuart Moore enjoyed the opportunity to showcase himself in front of manager Paul Tisdale in Tuesday’s Carabao Cup tie with Southend United. 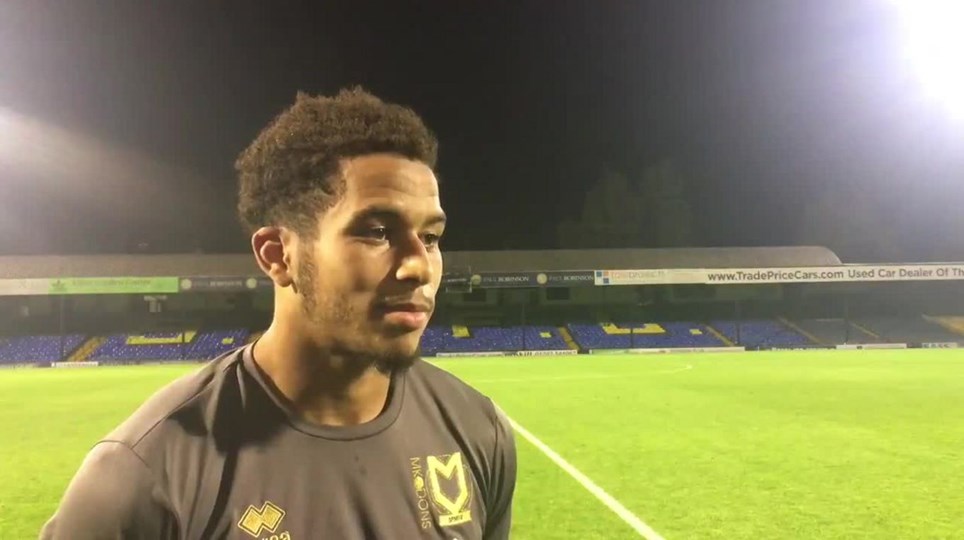 MK Dons secured their place in Round Three of the Carabao Cup courtesy of a 4-1 victory over Southend United at Roots Hall.

Goals from Rhys Healey and Callum Brittain had the Dons ahead by two at the break but Brandon Goodship’s close-range finish reduced the deficit nine minutes into the second half.

However, both Hiram Boateng and Sam Nombe came off the bench to secure the win – Boateng scoring his first as an MK Dons player and Nombe registering his first senior strike for the Club.

Boss Tisdale made five changes from the weekend, with Stuart Moore, Joe Walsh, Regan Poole, Rhys Healey and David Kasumu all coming in to the starting XI.

After an even start, Southend forced the first shot of the game – Brandon Goodship with a left-efforted effort which was blocked by Russell Martin on its way to goal.

Alex Gilbey and Jordan Bowery then fired strikes towards Nathan Bishop. A defender’s block denied Gilbey while Bishop kept out the attempt from Bowery. He also got to the parry ahead of Kieran Agard, who wanted a penalty off the Shrimpers stopper.

Bishop denied Healey at his near post on 12 minutes while the striker had another try shortly after from a Callum Brittain cross but headed over.

The Dons were on top and Gilbey produced another save out of Bishop with a dipping right-footed drive on the quarter-hour mark, following a powerful run through the middle of the park.

Stephen Humphrys was presented with an opportunity to put the hosts ahead against the run of play but, from Simon Cox’s low delivery, he failed to divert his effort anywhere near the target.

Cox then went close himself, forcing Moore into a stunning diving save in the 26th minute. The goalkeeper was at full stretch to fingertip the fierce strike wide of the target. From the resulting corner, Moore gathered a tame attempt from Jason Demetriou.

The Dons, though, deserved to be ahead and with 10 minutes to play in the half, they did edge in front.

Bowery headed Martin's cross back into the mix for Agard, who teed up Healey and he showed great composure to create space and then place a left-footed shot past the outstretched arm of Bishop and into the bottom left-hand corner. 0-1.

Gilbey almost doubled the lead within a minute of the re-start but saw his terrific curling effort crash into the side netting. Southend then went close to equalising through Humphrys, whose powerful header was saved by Moore.

It was the Dons who grabbed the second goal – and they did so in some style. Poole played a ball inside to Brittain, who took a touch on the edge of the Southend box before thrashing a fierce right-footed shot into the net off via the underside of the crossbar. A terrific strike. 0-2.

Tisdale’s men, who were 3-0 down at half-time on Saturday, did the best to reverse the scoreline in their favour as Healey went close to doubling his tally with a volley from Bowery’s knockdown.

Southend had other ideas and almost reduced the deficit in first-half stoppage time but Moore did well at his near post to keep out a low strike.

The Dons goalkeeper did well early in the second half as Southend went in search of an early blow. Moore first kept out a deflected free-kick from Humphrys before doing just as well to deny Ethan Hamilton, despite having his line of sight blocked by a host of players.

Hamilton had another go on 49 minutes but saw his effort fly over the crossbar. A better chance fell the way of Harry Lennon a few minutes later, however he headed wide when well-placed inside the box.

At the other end, Agard forced Bishop into a save with a curling shot. Southend made him pay for that miss, as they reduced the deficit on their next attack – Goodship tapping in at the far post from Humprhys low ball across goal. 1-2.

That sparked the Dons back into life after a slow start to the second period and on 63 minutes, Healey flashed over from the edge of the area after some good play by Brittain down the right.

Tisdale then made his first two changes of the evening, bringing Nombe and Boateng off the bench to add energy to his attack.

On 69 minutes, Humphrys dragged a shot wide from the edge of the area. Kasumu had a better opportunity at the other end moments later, but failed to connect with Boateng’s corner.

The chances kept coming for the hosts, as Joe Walsh was forced into a goalline clearance on 72 minutes. From the resulting corner, Humphrys headed over at the far post.

Three minutes later, Moore got down well to keep out Elvis Bwomono’s stabbed effort on goal while Brittain’s deflected almost made it past Bishop after a later Dons counter attack.

Williams entered the fray soon after but not before Goodship had two attempts to equalise – the first was saved by Moore and the second flew over.

The tie was hanging in the balance but with eight minutes to play, Boateng produced a moment of magic to restore the two-goal advantage.

Picking the ball up a flick on from Nombe inside the Southend half, the midfielder beat a number of defenders and burst free into area before cooly slotting past Bishop for his first goal as an MK Dons player. 1-3.

That sealed the success but Tisdale’s men still had time to add to their lead and seal off the away win with a fourth. It came courtesy of another substitute, Nombe, who raced onto Boateng's back-heeled through ball inside the area and sent a powerful right-footed strike through the hands of Bishop and into the far corner. 1-4.

Job done for Tisdale & Co, who will discover their third-round opponents on Wednesday.


Paul Tisdale believes Sam Nombe is a fine example of why it’s important for young players to show patience in their pursuit of first-team football.


Paul Tisdale was pleased with the way in which his side secured their place in Round Three of the Carabao Cup.


Stuart Moore enjoyed the opportunity to showcase himself in front of manager Paul Tisdale in Tuesday’s Carabao Cup tie with Southend United.