After weeks of waiting, MK Dons finally return to competitive action this weekend as they take on Shrewsbury Town at Stadium MK.

Due to the EFL's decision to suspend last Saturday's clash with Bury, Paul Tisdale's side are starting their Sky Bet League One campaign a week behind the rest of the division.

With their free Saturday, the Dons held an in-house friendly that enabled Tisdale to get a closer look at his squad.

The training game provided the majority of the squad with an opportunity to get 90 minutes under the belts, with 23 players in total featuring in a highly entertaining and competitive match.

Now, attention turns to Saturday's clash with Shrewsbury Town where MK Dons will be going in search of their seventh opening-game victory in their past 11 attempts.

THE OPPOSITION!
Manager Sam Ricketts has just entered his first full season as Shrewsbury Town manager after taking over managerial duties in December 2018. In his maiden season as a manager, Ricketts guided the Club to an 18th-place finish last term before adding quality to his side over the Summer. Bringing in some experienced hands last January in the form Town player Dave Edwards, midfielder Romain Vincelot and former Dons loanee Scott Golbourne, Ricketts then added two more to his squad this summer when signing Steve Morison on a season-long loan from Millwall and former Republic of Ireland international goalkeeper Joe Murphy, also adding to his defence when recruiting Aaron Pierre from Northampton, another former Dons loanee Ethan Ebanks-Landell from Wolves and Donald Love from Sunderland. There were eight goals in total, with recent acquisition Ben Reeves opening the scoring via a deflected effort. Sam Nombe and Callum Brittain were also on target in the first half while the second period saw Regan Poole, Kieran Agard, Joe Mason, Joe Walsh and Hiram Boateng each find the net.
Shrewsbury Town, meanwhile, hosted Portsmouth in their opening fixture of the season. It was the perfect start to the season for The Blues as they ran out 1-0 winners thanks to Ryan Giles wonder strike.

FIGHTING TALK!
Paul Tisdale: "Shrewsbury know what it's like to put a great season together and what it's like to fight hard. They got a great result against Portsmouth, they've got some great players and will want to make it two wins."

Sam Ricketts: "They are starting a week later but they will be excited, their first game after getting promoted, playing at home and they are a good team.

"They like to play football, really expansive football as well so we will need to be ready and try to carry that little bit of momentum that we are generating."

OFFICIALS!
Brett Huxtable will take charge of Saturday's clash at Stadium MK. The Devonshire official oversaw three MK Dons games last season, the most recent, a 3-2 defeat at Stevenage back in November 2018.

This season, he has taken charge of just one game, issuing one yellow card.

His assistant referees are Declan Ford and Kevin Howick while the fourth official is Grant Taylor.

HEAD TO HEAD!
This will be the 15th meeting between MK Dons and Tranmere Rovers and it’s the Dons who currently hold the advantage in the series with six wins to their name.

The two sides most recently met on the final day of the 2017/18 season, as Keith Millen oversaw a 1-0 win over Paul Hurst’s side - Kieran Agard’s penalty decided the clash.
The aggregate score currently stands at 22-16.

MK Dons, in association with Circus Magazine, will be hosting a Big Kick Off event in the Marshall Arena prior to the match. This will include live music, food stalls and activities for children such as the SET football cage and face painting.. 
Joe Walsh was happy to accept substance over style as MK Dons made a winning start to the 2019/20 campaign. 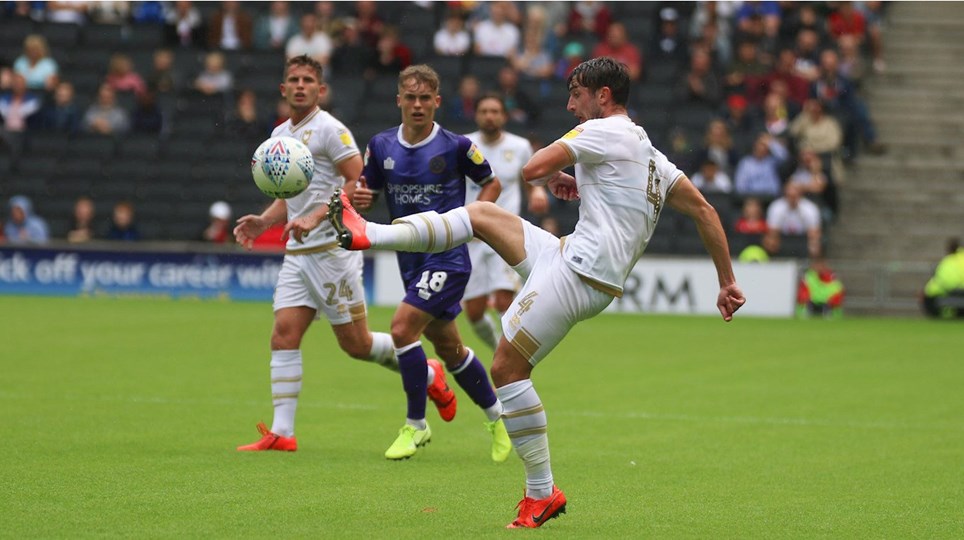 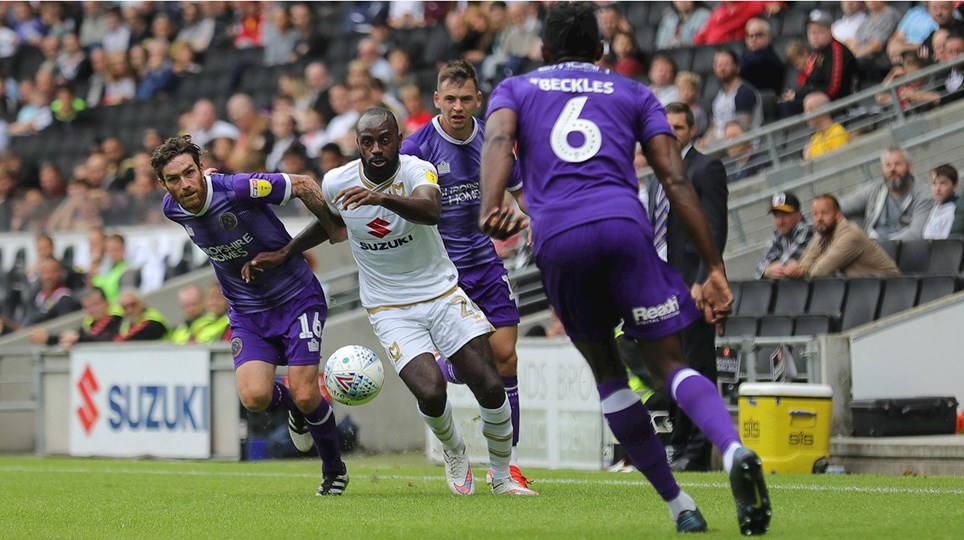 Rhys Healey marked his permanent return to MK Dons with a 93rd-minute winner against Shrewsbury Town.

In what was a game of few chances, it took until the dying seconds of the game for a winner to be decided.
Healey, who had re-joined the Club earlier in the summer, found the back of the net with seconds remaining.
Naming his first team of the Sky Bet League One campaign, Paul Tisdale handed full debuts to summer arrivals Hiram Boateng and Jordan Bowery.
The rest of the starting XI was familiar to the MK Dons fans, with Lee Nicholls starting between the sticks with Callum Brittain, George Williams, Russell Martin, Joe Walsh and Dean Lewington ahead of him.
In midfield, Boateng sat alongside Jordan Houghton and Conor McGrandles, while Kieran Agard and Bowery led the line.
In what was a nervy start for both sides, it took until the fifth minute for the first shot of the game as Bowery looked to open his account in spectacular fashion.
Having received the ball in the air from Williams, Bowery took one touch to flick over his shoulder before volleying just over O’Leary’s bar.
George Williams then found himself with space on the right and having set himself, picked out the run of Agard. Shrewsbury’s Ro-Shaun Williams was there to head behind, however, he would injure himself in the process - he was replaced by Omar Beckles.
The Dons would go close from the following corner, but Shrewsbury defended in their numbers before McGrandles’ effort ended over the bar.
Steve Morison, who was leading the line for Shrewsbury Town, looked a danger up front. His clever movement inside the box created some space, his delicate chipped effort hit the side netting.
Lewington then put in a dangerous low cross into the corridor of uncertainty, a delivery that was met by Bowery. His glancing header was well watched by O’Leary who claimed at the front-post.
Shrewsbury Town almost took the lead, but for a crucial interception from Joe Walsh. It came from the wide left as Giles’ cross looked to have picked out McCormick, just as it looks as if the Shrewsbury man would put his side ahead, Walsh somehow turned onto the bar before Nicholls claimed to keep the scores level at the break.
The early staged of the second-half were dominated by the away side, however, a number of crosses were headed away by Martin.
With the second-half lacking any real chances, it took until 70-minutes before either keeper was called into action. Boateng found himself with the ball just outside Shrewsbury's box, and after beating two defenders, he opted to cross instead of shoot. His pass was met by the chest of Bowery, but he was unable to generate enough power to trouble O'Leary.
Shrewsbury then had the chance to open the scoring on the counter. O'Leary claimed Lewington's corner before setting his free, however, the final ball into the box was met by Nicholls who read the situation well.
With the game entering the final five minutes, the Dons had penalty appeals turned away after Joe Walsh was pushed inside the box, Brett Huxtable, however, waved away the appeals.
Nicholls then produced the save of the match as he tipped Dave Edwards' dipping volley behind for a corner before Tisdale's side stood firm from three set-pieces.
With the game drawing to a close, Healey popped up with a late winner and sent the Stadium MK crowd into a rapturous cheer.
MK Dons Starting XI: Nicholls, Williams, Lewington, Walsh, Bowery (Agard 72,) Agard, Martin (Cargill 78) McGrandles (Reeves 72,) Houghton, Brittain, Boateng.
Subs: Moore, Poole, Gilbey, Harley.
Shrewsbury Town Starting XI: O’Leary, Pierre, Edwards, Williams, Whalley, Giles, Vincelot, Love, McCormick, Morison, Ebanks-Landell.
Goals: Healey (90+3)
Subs: Murphy, Golbourne, Beckles, Okenabirhie, Eisa, Rowland.
Booked: Martin.
Attendance: 7,967 (709).


Joe Walsh was happy to accept substance over style as MK Dons made a winning start to the 2019/20 campaign.