As ever, Sky Bet League Two continued to provide entertainment over the international break with a number of big results. Sporting Life’s Tom Carnduff previews the latest round of games. 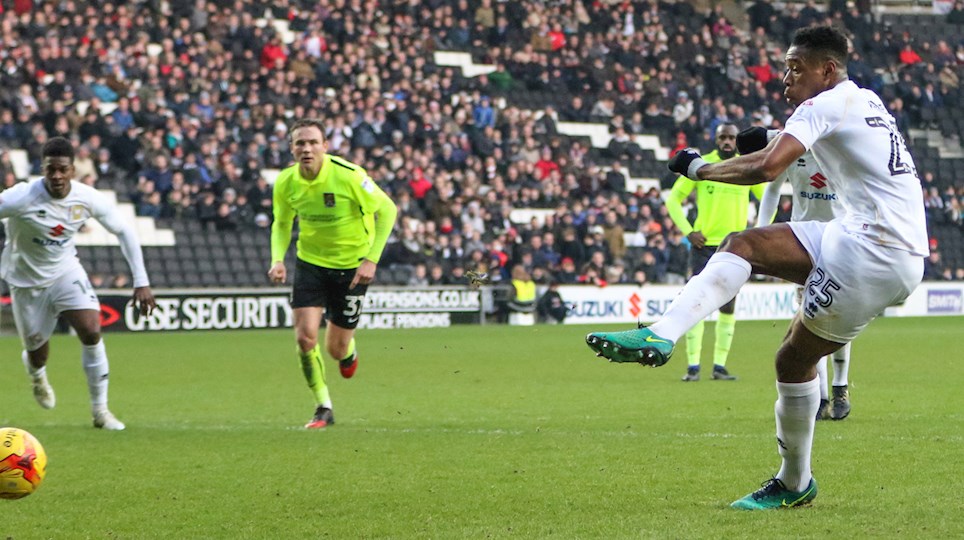 
mkdons.com details the storylines to follow heading into Saturday’s clash with Northampton Town at Stadium MK...

The result lifts MK Dons to third in the Sky Bet League Two table and sees them close the gap on leaders Lincoln City to five points.

Boss Tisdale made one change to the side which beat Cambridge United last weekend as Agard replaced Ryan Watson - an attacking change which saw MK Dons line up in a 3-4-3 formation.

His side made a fast start and had the ball in the net inside the opening minute - but the goal was disallowed for offside. Chuks Aneke did brilliantly in the build-up and found Agard, whose cross fell at the feet of Healey, who turned home from an offside position.

Northampton responded through Sam Foley, who forced Lee Nicholls into a routine save with a strike from distance.

The Dons attacked again soon after and Gilbey had a great chance to open the scoring but he couldn’t adjust his feet in time to convert from Agard’s low cross.

Nicholls was tested for a second time in the eighth minute courtesy of another long-range effort, this time from Sam Hoskins.

Tisdale’s men were producing some good football and they spent the majority of the opening quarter of an hour inside the Cobblers half and controlling the possession. They also won themselves several set pieces but weren’t able to take advantage.

The visitors worked their way into the MK Dons penalty area in the 20th minute but Hoskins’ resulting volley didn’t really trouble Nicholls between the sticks.

Aneke then headed wide at the other end before climbing within an inch of Healey’s inviting cross a minute later. At the other end, Nicholls produced a diving save to keep out Andy Williams’ fierce strike across goal.

MK Dons put together a fine attacking move in the 27th minute which start with Lewington setting away Healey down the left. Lewington had the ball returned to him and he delivered a deep cross to Aneke, who found Agard. The Dons’ number 14 controlled the ball on his chest and then sent an acrobatic volley just wide of the target.

Aneke met another cross seven minutes later and, again, tried to set up Agard but the ball was intercepted by Northampton stopper David Cornell.

The Dons maintained their control of the contest and another excellent move out from the back led to an opportunity for Aneke on the edge of the D but his looping effort was just about turned over by Cornell. Gilbey then tried his luck, sending a dipping volley just off target from 20 yards out.

Tisdale’s men arguably deserved a goal for their first-half efforts and they found it with 30 seconds remaining in the half.

They earned themselves a late corner on the near side which Lewington delivered to the far post. Moore-Taylor climbed well and headed the ball towards a lurking Agard, who volleyed home from close-range to give his side a lead at the break. 1-0.

Urged on by a vocal home support, the Dons made a strong start to the half and they should have been two-nil to the good within two minutes of the re-start but Healey failed to convert after a one-two with Aneke in the box.

On 55 minutes, Gilbey - who was having a dominant game in the middle of the park - raced onto a through pass from Houghton and fired a shot just wide of the right-hand upright.

Northampton offered a threat just after the hour mark with a deep cross which Williams did brilliantly to head away, with his namesake Andy lurking behind him.

Moments later, at the other end of the field, Walsh went agonisingly close to a stunning goal - a deft flick from a Williams cross which Cornell superbly kept out.

From the resulting corner, the Dons went even closer to a second after Cornell spilt a long-range effort. The parry hit Aneke, who didn’t have enough time to react, and then Walsh couldn’t turn home the loose ball.

MK Dons kept going close and it took a stunning block from Hakeem Odoffin to keep out what looked to be a sure fire goal for Healey, whose volley looked destined for the net.

Tisdale’s side then found the net but for a second time they saw it scratched off for the officials - Agard adjudged to have pushed his man before heading home a cross from the left.

The fragility of the one-goal lead bared fruit with 13 minutes to play as former Don Daniel Powell burst through after beating the offside trap. The substitute composed himself but was denied by an excellent one-on-one save from Nicholls.

Northampton remained on the front foot but were almost punished on the counter by Healey but, just like his opposite number, Cornell came out on top in a one-on-one situation. From the resulting corner, Healey struck the woodwork with a stunning 18-yard drive.

MK Dons continued to create chances and Stadium MK was on its feet when Aneke met a cross from Healey but the number 10 couldn’t direct his header on target.

With six minutes to play, Agard had a goal-bound shot blocked from Healey’s pass. At the other end, van Veen blazed over from the edge of the area.

Northampton continued to push in the closing stages but just as they have done in the last three outings, the MK Dons stood firm defensively and secured all the spoils.


As ever, Sky Bet League Two continued to provide entertainment over the international break with a number of big results. Sporting Life’s Tom Carnduff previews the latest round of games.


mkdons.com details the storylines to follow heading into Saturday’s clash with Northampton Town at Stadium MK...