Paul Tisdale’s side picked up three points in midweek with a 2-0 victory over Port Vale and will be out to double that total by securing a similar success today against the Robins.

The Dons, who are unbeaten at home this season, currently sit sixth in the Sky Bet League Two table and could climb as high as fourth with a win.

Tisdale’s men are also beginning to find their feet in front of goal, which is largely down to the form of their strikers. Chuks Aneke, Kieran Agard and Rhys Healey have combined for nine goals in the last six matches with Aneke leading the way, currently, with five to his name.

Should they continue to find the net, and maintain the defensive form which sees them ranked among the best in the EFL, their chances of adding to their points total will greatly increase.

Cheltenham Town arrive in Milton Keynes without a win in their last four games but buoyed after a last-minute goal in midweek earned them a point.

The Robins, 19th in the Sky Bet League Two table, have picked up nine points so far this season, seven of which have come on the road - Michael Duff’s men have won two and drawn one of their five away league fixtures in 2018/19.

Luke Varney scored twice in Tuesday’s 2-2 draw with Morecambe and he is tied for Cheltenham’s top scorer along with Ryan Broom and Conor Thomas.

MK Dons returned to winning ways in midweek courtesy of a routine 2-0 victory over Port Vale at Vale Park.

The Dons saw out the remainder the contest with relative ease and even had chances to extend to their lead - Ryan Watson, Alex Gilbey and Rhys Healey all going close to adding to the total.

Cheltenham Town twice came from behind to to salvage draw from their home encounter with Morecambe.

Jordan Cranston put the visitors ahead on 32 minutes but Robins striker Luke Varney levelled things up before half-time with a close-range finish.

Morecambe restored their lead nine minutes into the second half through Rhys Oates but Cheltenham, who missed a penalty, equalised in stoppage time - Varney the goalscorer again in the fourth and final minute of the game.

MK Dons boss Paul Tisdale confirmed in Thursday’s press conference that Osman Sow is currently sidelined with a groin strain while Ryan Harley remains out with an unspecified injury.

Peter Pawlett and Conor McGrandles are unavailable too although the former has returned to light training. Mathieu Baudry and Lawson D’Ath are also back in training but it remains to be seen when they will be put back into match action.

Fellow defender Craig Alcock is doubtful with a knock, while full-back Sean Long is unlikely to feature either.

Nield, in his second season as an EFL official, refereed MK Dons’ 1-0 defeat to Oldham Athletic back in February - a night when he produced just three yellow cards.

So far this season, he has tallied 29 bookings and two red cards in 10 games.

His assistant referees this afternoon are Andrew Aylott and Bhupinder Gill while the fourth official is Andrew Hendley. 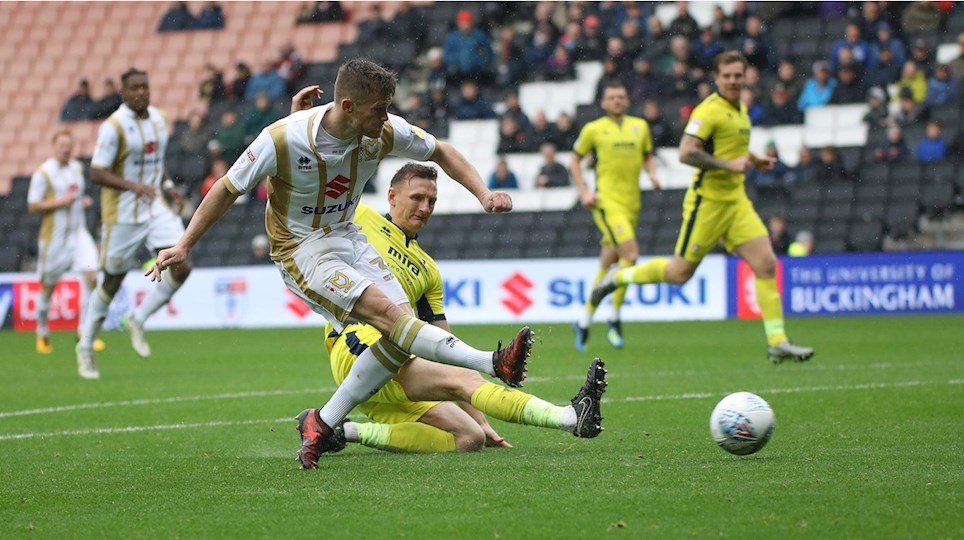 MK Dons made it back-to-back Sky Bet League Two wins with a dominant 3–0 victory over Cheltenham Town at Stadium MK.

The Dons, who beat Port Vale 2-0 in midweek, went ahead in the 34th minute through Chuks Aneke's sixth goal in six games before Rhys Healey headed home with six minutes left to play to double the lead.

Substitute Robbie Simpson then netted a penalty deep into stoppage time to seal the success, which moves Paul Tisdale’s men up to fourth in the Sky Bet League Two table and sees them close the gap on third-place to just three points.

Boss Tisdale was forced to make one change to his starting XI with Kieran Agard unavailable due to injury. Agard, who scored the second goal in Tuesday’s win over Port Vale, was replaced by Healey.

There was an early chance for Cheltenham’s Jacob Maddox but he couldn’t direct his header on target. MK Dons threatened straight after but Ryan Watson was dispossessed in the area after latching onto Aneke’s header.

Healey then burst through the Robins backline on four minutes but couldn’t beat Scott Flinders with a right-footed shot. Aneke was the next to try his luck two minutes later as he sent a curling effort wide of the target from the edge of the box.

MK Dons maintained their dominant start and went close again in the ninth minute, with Aneke involved again. He started the move with an excellent control on the chest and then Watson drove down the left. He returned the ball to Aneke, who set up Williams and his first-time shot was blocked by a defender.

The visitors were trying their best to stifle the Dons, who continued their assault on Flinders’ goal. Jordan Houghton got a shot away in the 25th minute but his attempt was off target.

Robins midfielder Maddox forced Lee Nicholls into his first save of the afternoon with a low drive from 18-yards out which the MK Dons number 1 dealt with comfortably. At the other end, Watson responded with a low free-kick which Flinders did well to get across to and claim.

Fouls committed by both sides meant most of the first half was played at a stop-start pace. That didn’t stop Healey breaking through the backline again in the 34th minute only to see his shot blocked a sliding defender.

From the resulting corner, though, MK Dons took a deserved lead and it was to nobody’s surprise that top goalscorer Aneke was the man to score it. George Williams met a long ball forward from Houghton and his header was brilliantly controlled by Aneke, who turned and fired home the opening goal of the game. 1-0.

Cheltenham went close to levelling things up with two minutes remaining in the half but Jordan Moore-Taylor got in the way of Ryan Broom’s goal-bound effort. MK Dons countered with Aneke, who set up Watson and he saw a on-target attempt blocked.

The Dons maintained their advantage through to the break and they immediately went about extending it in the second half through Healey but he was, again, denied by a save from Flinders.

Cheltenham's goalkeeper was forced into action again in the 51st minute - this time it was Gilbey with a strike which Flinders palmed away.

Shortly after, Nicholls produced a stunning diving save to keep out a curling attempt from Maddox which looked to be heading for the far corner of the net - the Robins' best effort of the game.

MK Dons went straight up the other end after dealing with the corner and Cargill picked out Aneke with a cross - the striker, though, sent his shot wide of the left upright.

Watson then drilled wide with a left-footed effort across goal as Tisdale’s men continued their excellent start to the second half.

MK Dons again went close on the hour mark when Joe Walsh latched onto a deflected cross from Watson. His volley struck Healey but Cheltenham were able to get in the way of the ball and prevent it from rustling the net.

Tisdale's side then came under a bit of pressure from two Cheltenham corners but were able to deal with both deliveries.

The Dons boss made his first two substitutions in the 71st minute, replacing Watson and Aneke with Brandon Thomas-Asante and Robbie Simpson.

Thomas-Asante was involved straight away and almost got himself on the scoresheet. The youngster won the ball on the halfway line and spread play over to Gilbey, whose cross was inches away from connecting with the head of Thomas-Asante for a second MK Dons goal.

There was a stoppage in play following the chance due to a serious-looking injury to Robins player Aden Baldwin, who left the field on a stretcher and was replaced by Tyrone Barnett.

The Dons’ dominance and control of the game meant a second goal might not be required to see out the contest but they found one anyway with six minutes left to play. Gilbey switched play out to the right to Williams, who sent a delightful cross over to the far post and right on to the head of Healey, who diverted home a deserved goal - his third since joining on loan from Cardiff City. 2-0.

Nine minutes of stoppage time were awarded as a result of the injury to Baldwin and during those minutes, Cheltenham went close through Barnett.

However, it was MK Dons who would have the final say as Simpson netted from the penalty spot, following a foul on Brittain in the box, to secure a scoreline which better reflected his team's dominance. 3-0.

Copies of Red Dot are still available to buy from the Club Superstore at Stadium MK.

The 68-page magazine, jam-packed full of exciting content, is priced at £3 and can be bought from the Box Office and Club Superstore.

What’s included:
Welcome - Executive Director Andrew Cullen provides an update on all the goings at Stadium MK as well offers some clarity on the iFollow MK Dons live streaming initiative.

News & views - A look at the latest goings on at Stadium MK.

Action replay - A pictorial look back at the draw with Tranmere Rovers.

Action replay - A pictorial look back at the away win over Port Vale.

What’s on my iPad - Ryan Watson shares with a few of his favourite tracks, movies and TV shows

iFollow - Kieran Agard’s thoughts on his goalscoring performance in midweek.

Message bulletin - Where all your greetings, messages and birthday announcements can be found

GoldDon moment - A look back at an iconic moment in MK Dons’ history.