Mansfield editions of Red Dot remain available to buy from the Box Office - the perfect memento of a memorable afternoon for MK Dons. 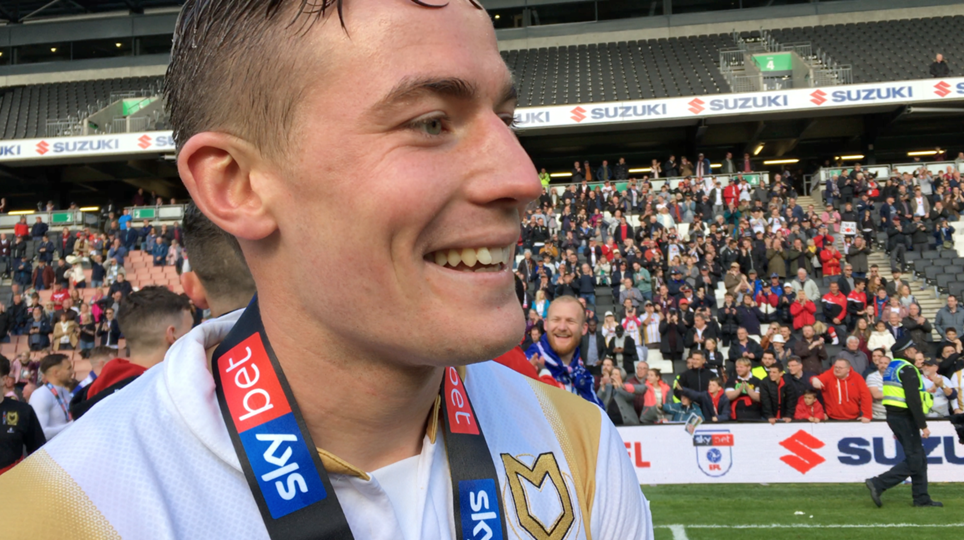 MK Dons secured promotion to Sky Bet League One courtesy of a hard-fought 1-0 victory over Mansfield Town at Stadium MK.

David Wheeler, named the Dons’ Player of the Month for April, scored the decisive goal just two minutes into the Winner Takes All clash and Paul Tisdale’s men saw out the remaining 94 minutes to return to the third tier of English football at the first time of asking.

Boss Tisdale made three changes to his starting XI with George Williams, Joe Walsh and Chuks Aneke all coming into the side in place of Ousseynou Cisse, Jake Hesketh and Ryan Harley.

Tisdale’s men made the perfect start, opening the scoring with the first shot of the game two minutes in. Williams forced a corner which was sent into the box by Dean Lewington and David Wheeler was there, unmarked, to head home his third goal in four games. 1-0.

Wheeler almost found himself in on goal again straight from kick-off but he was just beaten to a lofted through ball by goalkeeper Conrad Logan. The Dons then survived a Mansfield free-kick at the other end, with Lee Nicholls punching clear from Mal Benning’s delivery.

On 14 minutes, Nicholls got down well to gather a low drive from Neal Bishop. MK Dons responded and Aneke came within an inch of heading in from Wheeler’s fierce cross.

Aneke went even closer on 23 minutes but his low first-time effort from Agard’s cross was cleared off the line by a Stags defender. Jacob Mellis then produced a diving save out of Nicholls, who got a right arm to the strike.

The Dons were ascendancy as the half drew to a close but weren’t able to add to their tally before the break. Agard did have a penalty shout late in the period but it was waved away by referee Lee Probert.

Mansfield, needing a goal, started the second half well and Tyler Walker forced Nicholls into a save at his near post inside the opening minute. The Dons then had an opportunity of their own to find the net early in the half but Williams’ glanced header, from Lewington’s free-kick, was saved.

On 56 minutes, Turner headed wide from a corner. Stags striker Walker then raced through but couldn’t pick out teammate CJ Hamilton with his cross to the far post.

Aneke, moments later, went agonisingly close to doubling the lead but his right-footed drive was deflected into the side netting by Alex MacDonald. At the other end of the pitch, Bishop tested Nicholls from range but couldn’t keep his try on target.

On 67 minutes, Agard was played in by Aneke but was denied, one-on-one by Conrad Logan. Shortly after Lewington tried his luck but saw his effort blocked.

Ryan Watson was brought off the bench with 20 minutes to play, replacing the goalscorer of the Dons’ opening goal, Wheeler. His first involvement was to defend a free-kick from which Martin headed clear under his crossbar.

With a quarter of an hour to play, Stadium MK watched on as a Jorge Grant free-kick whistled through the MK Dons penalty area untouched. Aneke then went close to beating Logan with an audacious chip but the Stags stopper kept it out.

Mansfield piled on the pressure late but the Dons held on through six minutes of stoppage time right up until the final whistle of the campaign. Back in third tier for the first time of asking with Paul Tisdale at the wheel.


Mansfield editions of Red Dot remain available to buy from the Box Office - the perfect memento of a memorable afternoon for MK Dons.