MK Dons make their first ever journey to the Globe Arena thevening and will be going in search of their sixth straight Sky Bet League Two victory.

Paul Tisdale's side have enjoyed a 100 percent record over the last five matches and have moved into the automatic promotion places as a result of that form.

The Dons are enjoying their best run of results since 2015 but with fourth-place Mansfield Town just a point behind them, they know they must keep their foot firmly on the pedal.

THE OPPOSITION!
Morecambe head into this fixture having picked up an important three points against Forest Green Rovers last Saturday. The win over Forest Green pulled Jim Bentley's side eight points clear of the relegation zone.

Bentley is currently the longest-serving manager in the EFL. He took over back in 2011 and has since helped the Club maintain their status in the EFL.

Striker Kevin Ellison currently has six goals to his name, while Aaron Collins has also impressed since joining in February. The former Wolves forward has netted three times in five games since his arrival.

Paul Tisdale's men fell behind at Moss Rose but struck back just before half-time through David Wheeler, who scored his first goal for the Club.

In the second half, Callum Brittain fired home his first of the campaign to put the Dons ahead and then Kieran Agard put the seal on a fine afternoon's work with a looping header.

FIGHTING TALK!
Paul Tisdale: "It’s about the next game for us. Often clichés have a meaning, and at this point, it's the right thing to say.”

“We'll go back, get into our routine and go again on Tuesday.”

Jim Bentley: "We hadn't won at home for a while and we had lost the last two. We shouldn’t have lost the (Yeovil) game but we’ve bounced back in front of our own fans.

“We have another big game on Tuesday (against MK Dons) and we have to try and back it up with another win.”

TEAM NEWS!
Paul Tisdale did not hold a pre-match press conference ahead of tonight's clash but when he addressed the media at the weekend, he didn't state he had any fresh injury concerns from the win.

Morecambe are without defender Jordan Cranston, who will serve the second game of his two-match ban for collecting 10 yellow cards.

Striker A-Jay Leitch-Smith remains on the sidelines with a hamstring injury.

He most recently run the rule over a Dons game back in October - MK Dons' 2-0 win over Port Vale. Mr Joyce has officiated 37 matches this campaign, producing a total of 134 yellow cards and showing just the one red.

His assistant referees are Graeme Fyvie and Ian Dudley while the fourth official is Gareth Mellor.

HEAD TO HEAD!
This will be only the fourth between MK Dons and Morecambe - with it being the first to take place at the Globe Arena.

The last time the Dons faced Morecambe away from home was in 2007, with the game taking place at Christie Park. The two sides met most recently back in November and it was Paul Tisdale's side who ran out 2-0 victors at Stadium MK.

FOLLOW IT LIVE!
Tickets for tonight's clash remain on sale from MK Dons until midday. After this time, tickets will only be available at the Globe Arena. Tickets are priced at £21 adults, £17 seniors, £15 young persons/students and £6 under-18s while under-11s go FREE*.

Supporters outside the UK and Ireland will also be able to watch the action on iFollow MK Dons via either a Match Pass or Season Pass (£110 and provides provide access to watch up to 46 live MK Dons matches during the 2018/19 season) - click HERE  for more information! 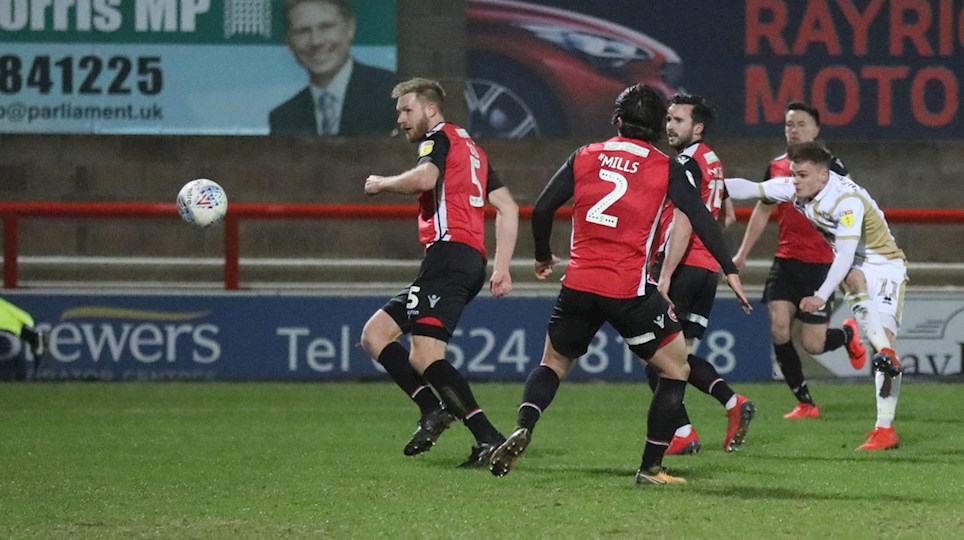 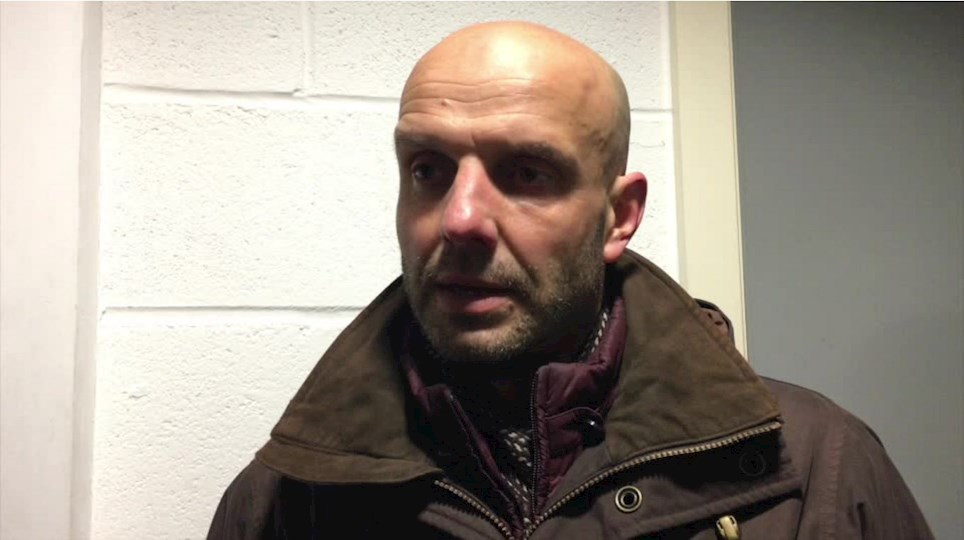 MK Dons’ winning run came to an abrupt end in tough conditions at the Globe Arena as they were beaten 4-2 by Morecambe.

In awful conditions in Lancashire, the hosts ran up a three-goal lead courtesy of two first-half finishes and one early in the second.

Kieran Agard came off the bench to net twice and give Paul Tisdale’s men some hope but their dreams of a dramatic comeback vanished with five minutes to play when Aaron Collins scored a fourth.

The result sees MK Dons drop back to fourth in the Sky Bet League Two table because of their inferior goal difference compared to third-placed Mansfield Town.

Boss Tisdale made two changes to his starting XI, with Jordan Houghton and Jake Hesketh coming in to replace Joe Walsh and Agard. The Dons lined up in a 4-4-2 diamond formation, with Houghton at the back and Hesketh in the number 10 role.

The Dons were against the heavy wind in the first and Morecambe midfielder Alex Kenyon tried to use the elements early with a long-range effort which, in the end, flew harmlessly over the crossbar.

Tisdale’s men then won their first corner of the evening in the fourth minute but the Shrimpers dealt with the delivery in from Conor McGrandles. They had a better opportunity to break the deadlock four minutes later, but McGrandles’ low ball in to Chuks Aneke was intercepted.

Kenyon tried his luck again on 10 minutes with a dipping volley which he sent wide of the right post. MK Dons responded and after Morecambe failed to clear a deep cross, Alex Gilbey flashed a right-footed half-volley off target.

Stuart Moore was the first goalkeeper called into action just prior to the quarter-hour mark. Richie Bennett had a shot blocked by Russell Martin but he pounced on the loose ball and fired in a low drive which the MK Dons stopper kept out.

Gilbey then threw himself in the way of an attempt from Aaron Wildig before Brittain denied Bennett in the area with a well-timed tackle.

Both sides were struggling to battle the heavy winds but it was the Shrimpers who managed to find a breakthrough. A cross in from Rhys Oates hung up well for Bennett and he climbed to head the ball into the bottom right corner, past the outstretched arm of Moore. 1-0.

The Dons tried to respond instantly but David Wheeler was denied dispossessed on the edge of the area after a driving run through the middle. Wheeler had another opportunity with nine minutes to play in the first half, but was denied after cutting onto his left foot inside the box.

Tisdale’s side were then awarded a free-kick for a foul on Gilbey on the left-hand side of the penalty area. McGrandles’ ball in was blocked.

Morecambe worked their way up the other end of the field and were awarded a throw. It was taken short but the delivery in took a glance of the head of Ousseynou Cisse and carried through to the net - with a helping hand from the wind. 2-0.

Hesketh went agonisingly close to reducing the deficit before half-time but his right-footed effort flew inches wide of the far upright. In the final minute of first-half stoppage time, Cisse tried to make amends for his own goal but saw his header from Lewington’s corner blocked on its way through to goal.

MK Dons returned from the break unchanged but with the wind in their favour, shooting from left to right. They had an early opportunity to pull one back but McGrandles’ cross was just too high for Wheeler at the far post.

A minute later, they had a penalty appeal waved away for what appeared to be a push on Aneke inside the area. The MK Dons number 10 then produced a terrific turn in the box but saw the ball run through to the goalkeeper.

On 51 minutes, Hesketh was brought down on the far touchline and MK Dons were awarded a free-kick. McGrandles whipped it in but the ball sailed out of play. The Scotsman delivered another cross moments later but Wheeler wasn’t able to direct it home.

Tisdale made his first substitution during the stoppage, replacing Cisse with Stephen Walker in the hopes of inspiring a comeback. Those ambitions were dented greatly a minute later, as the hosts extended their lead to three courtesy of a ferocious 18-yard strike from Bennett. 3-0.

Agard was brought on shortly afterwards, as MK Dons went to a front three, needing three goals to salvage a result. Tisdale’s third and final alteration followed - Robbie Simpson the man coming on.

The experienced striker almost made an instant impact but he was an inch away from turning home Walker’s low ball across the face of goal.

Moments later, Gilbey sent a ball into the area and Agard managed to get a deft touch to loop it past goalkeeper Mark Halstead and into the net. Game on, with 20 minutes to play. 3-1.

In search of a second to really set up an interesting end to the contest, Aneke produced a low shot which was saved by Halstead.

It was Agard, though, who would find that second goal with a quarter of an hour remaining. Martin fired a cross in which Simpson met. Agard pounced on the loose ball and scrambled the ball over the line for his second goal off the bench. 3-2.

The Dons had their tails up but Bennett went within an inch of restoring the two-goal advantage on 77 minutes with a header which bounced off the frame of the goal. At the other end, Simpson had a potential equaliser saved by Halstead from point-blank range.

It was a spirited second-half from Tisdale’s side but their hard-work was undone in the 85th minute when Aaron Collins raced onto a long ball forward, rounded Moore and slotted in a fourth for the Shrimpers. Game over. 4-2.