The first-team squad is set for its first run-out of the summer this evening, as MK Dons travel to St Neots Town.

Tonight, Paul Tisdale is expected to hand his senior players their first appearances of the campaign at Rowley Park. Kick-off is at 7.45pm.

This season, St Neots Town will be looking to improve on their mid-table finish from 2017/18 - the Cambridgeshire club ended the year 12th in the Southern League Premier Division table on 64 points.

The Saints squad includes a few players with EFL experience, such as Johnny Herd, who made over 40 appearances for Southend United and Dion Sembie-Ferris, who came through the ranks at Colchester United.

Matt Clements side also began their pre-season campaign on Saturday, with a meeting with MK Dons’ Sky Bet League Two rivals Cambridge United. The U’s came out on top, 7-1.

The last time the two sides met was also in a friendly setting, back in July 2011.

Karl Robinson’s side were 4-1 victors that afternoon, with Stephen Gleeson, Jabo Ibehre, and trialists Jay O’Shea and John Dunleavy on target for MK Dons. Shane Tolley scored the Saints’ only goal.

The majority of the first-team squad are set to travel to Cambridgeshire this evening, with Paul Tisdale set to split his team into two to allow the players to each get 45 minutes under their belts.

Alex Gilbey, Chuks Aneke and Osman Sow are three players who aren’t expected to play a part but Joe Walsh could feature for the first time in six months having recovered from a knee problem. Gilbey continues to make progress in his recovery but will be brought along slowly. Aneke is following an individual programme as he looks to get ready for the 2018/19 campaign and Osman Sow is undergoing rehabilitation.

This evening’s match will also provide Tisdale and MK Dons supporters with a chance to see the new additions in action for the first time. Jordan Moore-Taylor, Ryan Watson, Lawson D’Ath, Mitch Hancox and Jordan Houghton could all play a part.

Entry to tonight’s friendly with St. Neots Town is priced at £8 adults and £5 concessions while under-16s go FREE when accompanied by a full-paying adult. Entry at the turnstiles is cash only. 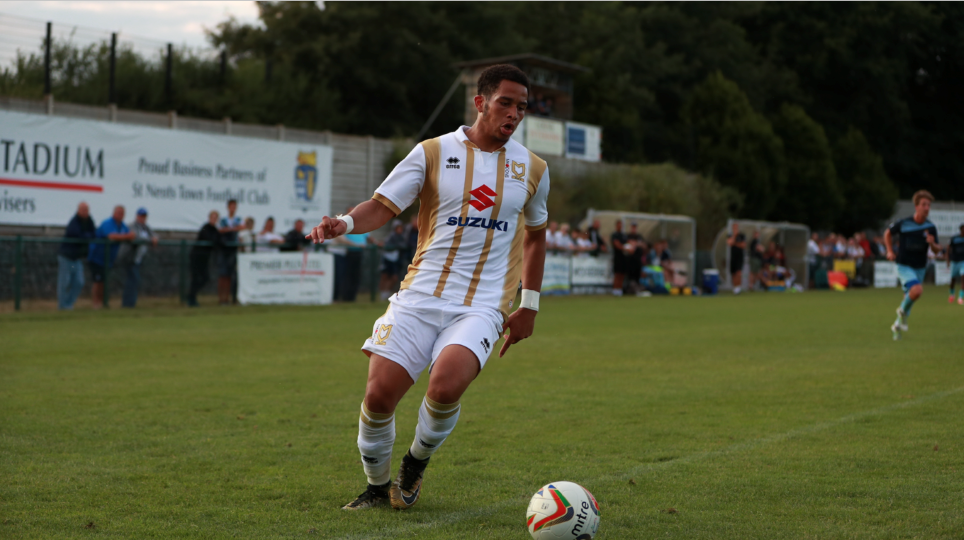 
Matt Oakley returns to St. Neots Town this evening, almost 25 years after playing for the Saints as a teenager.

MK Dons’ first-team squad made a winning start to their pre-season campaign, beating St. Neots Town 5-1 at the Premier Plus Stadium.

Sam Nombe and Aidan Nesbitt were on target in the first half for Paul Tisdale’s men, who added to their scoreline after the break through Dylan Asonganyi, Kieran Agard and George Williams. Asonganyi’s effort was the pick of the bunch - a 30-yard pearler into the top corner.

There were plenty of positives for Tisdale aside from the scoreline, with impressive debuts for some of his summer signings and a 45-minute appearance from Joe Walsh on his return to action. The only real negative was an injury to Brandon Thomas-Asante, suffered in the second half.

Tisdale’s squad was split into two, to allow the players to get minutes under their belts. Walsh was named in the first starting XI, seven months after undergoing surgery on a knee injury. He played alongside new signing Ryan Watson, who made his debut for MK Dons.

MK Dons started bright and Nesbitt went close to a goal inside of three minutes. The winger collected a ball from Peter Pawlett, who did well down the right, but his first-time curling effort struck the crossbar.

The next chance came courtesy of a quick counter as Nicholls, after gathering the ball inside his area, sent a ball forward for Nombe to chase. The young striker powered into the box but couldn’t find the target with his left-footed attempt.

A minute later, Nesbitt found himself behind the St. Neots backline. He tried a delicate lift over the goalkeeper Dan Swan, who managed to get a strong hand to the effort to keep it out.

Pawlett was having a lively evening and he created an opportunity for Robbie Muirhead in the 23rd minute. The attacking midfielder created space before pulling back for the Scottish forward, who sent his first-time drive over the crossbar.

MK Dons continued to pile on the pressure and they threatened twice in the space of a few seconds on 25 minutes with Nombe’s shot kept out by a block and Nesbitt, after pouncing on the loose ball, denied once again by Swan.

A deflected Callum Brittain cross led to a corner delivered by Muirhead. It was a good cross from the forward but, despite their best efforts, neither Walsh nor Ousseynou Cisse could connect. MK Dons were awarded another corner and, again, Cisse came close to getting his head to the ball.

MK Dons maintained their dominance through the half-hour mark and with 10 minutes remaining in the first half they took a deserved lead. Pawlett spotted Nombe in space and played him in with a through pass. The linesman’s flag stayed down which allowed the striker to run free on goal, round the goalkeeper and finish into the empty net. 0-1.

Just like London buses, a second goal arrived soon after. MK Dons were awarded a free-kick which was taken short by Muirhead to Nesbitt, who sent a low drive inside the near post from the left corner of the box. A great finish! 0-2.

MK Dons ended the half with Pawlett in the thick of the action. Supporters will be hoping for another positive season from the Hull-born midfielder, who was lively in the final third to, first of all, deliver a cross and then shoot into the side netting from a tight angle.

The interval saw Tisdale make his anticipated 11 changes, with the likes of Williams, Agard and Thomas-Asante enter the contest along with summer signings Jordan Moore-Taylor, Mitch Hancox and Lawson D’Ath.

The latter almost found himself on the scoresheet two minutes into his debut. The former Luton Town midfielder pounced quickly after Thomas-Asante’s low shot was parried by the St. Neots goalkeeper but his effort was stopped on the line by a defender.

Striker Dion Sembie-Ferris was one of several EFL players in the St. Neots side and he pulled a goal back for the Saints on 51 minutes with a deflected effort from 20-yards out. 1-2.

MK Dons supporters inside the Premier Plus Stadium then got their first glance of the heading ability of centre-back Moore-Taylor, who displayed some impressive hang-time to clear away a couple of speculative deliveries into the area.

There was plenty in the first hour for manager Tisdale to be happy about but he and the team did suffer a blow in the 63rd minute when Thomas-Asante was forced off with an injury.

He was replaced by Asonganyi, who returned to action last weekend at Newport Pagnell Town following a spell on the sidelines. He marked his second appearance in eight months by scoring a stunning third MK Dons goal - a 30-yard pearler into the top right-hand corner, which left the goalkeeper with no chance. 1-3.

Later, Agard, Williams and Hancox all went close as MK Dons looked to extend their lead - the latter firing wide from an acute angle.

With 13 minutes remaining, Tisdale introduced striker Robbie Simpson who had only signed for the Club earlier in the day. Moments after his introduction, he was the target of a low cross from Williams which was intercepted in front of the former Exeter man, who was awaiting the tap-in.

Simpson had another attempt moments later - a looping header which was saved. Simpson had reacted to a parried D’Ath strike - D’Ath did brilliantly inside the area to create the shooting opportunity.

The chances continued to come. On 81 minutes, McGrandles saw a low shot saved after latching onto Simpson’s lay-off. McGrandles then curled over following a strong run down the right from Williams.

A cross from Asonganyi on 86 minutes caused further panic in the St. Neots box. They failed to get it clear and that allowed Simpson to set up D’Ath, whose goal-bound attempt was blocked by the arm of a defender. Referee Josh Smith pointed straight to the spot which presented Agard with the chance to score his first goal of the summer. The striker obliged, sending his effort straight down the middle to make it 1-4.

MK Dons were able to add one more goal to their tally in the closing stages of the match and it was another terrific strike, this time from George Williams, who sent a low left-footed shot inside the goalkeeper’s near post. 1-5.

The referee’s whistle sounded soon after, capping off a positive evening’s work for Paul Tisdale’s men, who travel to Brackley Town on Friday evening.


Matt Oakley returns to St. Neots Town this evening, almost 25 years after playing for the Saints as a teenager.