MK Dons make their long-awaited return to Stadium MK tonight to take on Ipswich Town in the first of two home pre-season friendlies this week.

Paul Tisdale will take charge of his first home game as MK Dons manager, three months on from the side’s last outing in Milton Keynes.

It will be a tough one for Tisdale & Co, going up against Sky Bet Championship opposition, but the meeting will provide a good test ahead of the start of the 2018/19 campaign, which begins in just under two weeks’ time.

Similarly to MK Dons, this evening’s fixture is Ipswich Town’s penultimate friendly of the summer and therefore the Tractor Boys will be looking to impress ahead of their Sky Bet Championship opener against Blackburn Rovers.

New boss Paul Hurst has overseen three friendlies so far this summer, winning two of them and losing the other. A strong Ipswich side were beaten 2-0 by Braintree Town in their first run-out of the campaign but they’ve followed that defeat up with 1-0 wins over Crawley Town and Barnet.

Assistant Manager Matt Oakley told iFollow MK Dons last week that he and Tisdale would use these two home friendlies as a chance to form the starting XI that will face Oldham Athletic on opening day.

Whereas players were previously handed 45 minutes, expect the starters to remain on the field for at least an hour as they look to get prepared for the beginning of the season.

In terms of availability, Osman Sow, Chuks Aneke and Brandon Thomas-Asante remain sidelined while Joe Walsh and Lawson D’Ath both didn’t feature in Spain due to their management programmes - both players are aiming to return form long-term lay-offs.

He oversaw MK Dons’ defeat to Blackburn Rovers back in August 2017 while last marshalled Ipswich in February - showing four yellow cards in their 1-0 win over Preston North End.

His assistant referees tonight are Akil Howson and Dan Robathan while the fourth official is Alex Rayment.

Matt Oakley: “Up until now we have kept it level and fair because we need to keep the squad going forwards and getting fit.

“The squad will start to whittle down and you’ll see it forming to the starting XI. Those players will start playing 60 to75 minutes and then towards a 90 in the second game, getting ready for our first game of the season.”

Paul Hurst: “The players are working hard, there’s no doubt about that and I can’t fault their attitudes, but it’s still a little bit of a hangover from what they’re used to.

“We’re trying to change a bit of mentality around the group, which again takes time. We want them to be a bit more positive in everything they do and at times they can look a little bit fearful, almost.”

To book tickets click HERE, visit the Box Office at Stadium MK or call 0333 200 5343. Tickets will remain on sale right up until kick-off for both games.

Can’t make the game? iFollow MK Dons will have full, live commentary from Stadium MK with BBC Three Counties presenter Ollie Bayliss and MK Dons’ leading goalscorer Izale McLeod - click HERE to sign up for as little as £4.49 a month.

Supporters can also stay in touch with the action via the Match Centre, which can be accessed on mkdons.com from 6pm.

A full match report will be available to view on mkdons.com straight after the whistle, with highlights and a gallery to follow on Wednesday. Tisdale enjoying first taste of Stadium MK as a home


Paul Tisdale enjoyed his first experience of leading out MK Dons at Stadium MK this week and the manager will have one final dress rehearsal tonight before it all starts for real in eight days time. 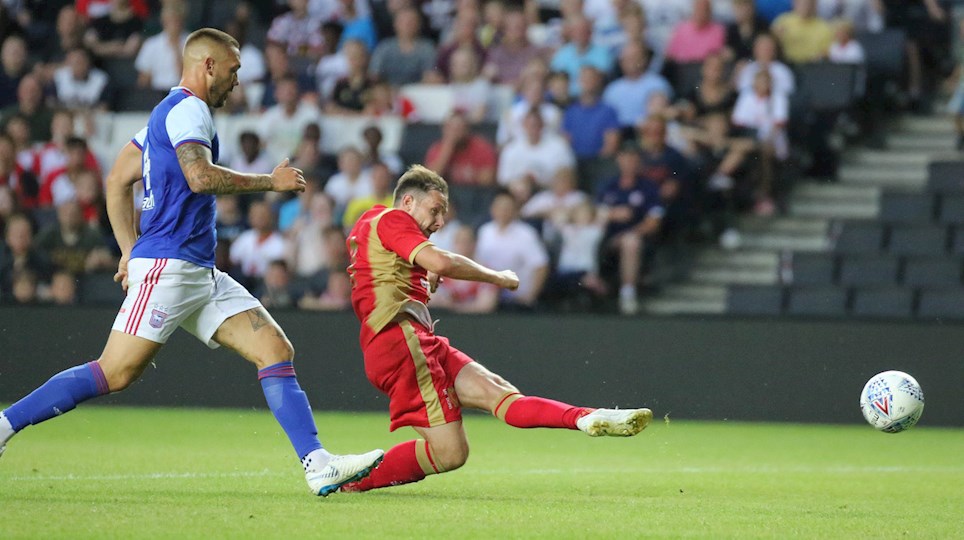 
With just one game to go until the start of the Sky Bet League Two campaign, midfielder Jordan Houghton believes MK Dons are on the right path to success. MK Dons returned to action at Stadium MK on Tuesday and put in a solid display against Sky Bet Championship side Ipswich Town.

Tisdale’s side looked solid at the back and provided the Tractor Boys with some moments of danger at the other end of the pitch but it was the visitors who came out on top - winning 1-0 thanks to a penalty from Freddie Sears.

The starting XI included two players - Jordan Moore-Taylor and Jordan Houghton - making their first appearances as MK Dons players at Stadium MK, as well as the returning Ryan Harley. There was also a start for Alex Gilbey, seven months on from knee injury.

MK Dons started bright but it was Ipswich who threatened goal first when Ellis Harrison collected a low cross from Grant Ward. The striker’s initial effort was blocked by Callum Brittain and the follow-up attempt was sent wide.

Supporters inside Stadium MK got their first glimpse of the attacking play that Tisdale will be looking to bring to the Club inside the opening five minutes. Kieran Agard demonstrated some strong hold-up play before finding Alex Gilbey, who switched play over to Conor McGrandles. The midfielder controlled the ball on his chest but was dispossessed as he made his way deep into the penalty area.

Ipswich saw a lot of the ball in the opening 20 minutes but the MK Dons defence dealt with everything that came their way. Jordan Moore-Taylor and George Williams were dominant while Jordan Houghton and Alex Gilbey made some crucial tackles in the middle of the park.

At the other end, there was a half-chance for Harley but the midfielder wasn’t able to connect with his strike after Luke Chambers’ headed clearance fell kindly for him on the edge of the box.

The closest either side came to an opening goal inside the first half an hour was from Ipswich winger Ward’s left-footed drive, which he flashed wide from deep inside the MK Dons penalty area.

Soon after that chance, an in-swinging free-kick put the MK Dons defence under pressure but once more they stepped up to the mark - Lee Nicholls, this time, the man to deal with the situation, punching clear inside a crowded six-yard box.

MK Dons’ best attacking move of the first half arrived on 35 minutes. It involved nearly every player in a red and gold shirt as they worked their way from one end of the pitch to the other. It resulted in a chance for Gilbey, who dragged his right-footed shot wide. Harley was lurking at the far post but couldn’t pounce and convert.

Ipswich threatened once more at the end of the first half but the centre-back duo of Williams and Moore-Taylor wouldn’t let the Tractor Boys through. In one instance, Moore-Taylor stayed step for step with a surging Harrison and blocked the striker’s shot.

MK Dons put together another good move a minute before the interval. Gilbey drove forward before cutting back and switching play to McGrandles, who spotted the run of Callum Brittain and picked him out with a clever pass. Brittain beat his man but couldn’t pick out a teammate with his cross.

Gilbey was the only player not to return to the field for the second half. The planned substitute saw Ousseynou Cisse take the place of the attacking midfielder, who continues to make progress on his way back from a knee injury.

Ipswich registered the first attempt of the second half and it was the best of the match to that point. Harrison cut onto his right foot on the edge of the area and sent a bending shot towards the far post which Lee Nicholls dived over to and saved well.

MK Dons then went close after a winning a corner from a Williams header which was put over the crossbar by an Ipswich defender. The visitors failed to deal with the resulting set-piece and that led to a chance for Harley, who forced Bartosz Bialkowski into a diving save with his 20-yard strike.

The next shot on target, on 58 minutes, resulted in the game’s opening goal. Confusion at the back allowed Ward to nip in but the Ipswich wide man was brought down by Williams. The referee pointed straight to the penalty spot and Freddie Sears converted to put the visitors ahead. 0-1.

MK Dons looked to respond through Peter Pawlett seven minutes later. The attacking midfielder raced onto Agard’s flick but his left-footed effort was straight down the throat of Bialkowski.

Tisdale’s side were then awarded a free-kick which was taken after four changes were made by the manager. The delivery was sent over to the far post where a stretching Moore-Taylor was inches away from connecting.

Aidan Nesbitt was one of those four substitutions made and he went agonisingly close to an equaliser with only his second touch. Liam Sole’s low cross made it through to the Scot who, after composing himself, sent in a shot which was palmed away by the Ipswich keeper.

Five more changes were made with a quarter of an hour remaining and the switches saw a number of young professionals enter the contest as well as new signing Mitch Hancox and goalkeeper Wieger Sietsma.

The young defence coped well with the threats from the Sky Bet Championship outfit. Finn Tapp, on one occasion, showing tremendous touch and composure to cleverly work his way out of trouble while under pressure from two defenders on the edge of his own box.

Nombe limped off with seven minutes left to play after picking up a knock. He was replaced by 17-year-old Dylan Asonganyi, who looked eager from the off while leading the line up front.

However, neither he nor his teammates were able to find away past the Ipswich backline to grab the equalising goal their display arguably deserved.

Tisdale enjoying first taste of Stadium MK as a home


Paul Tisdale enjoyed his first experience of leading out MK Dons at Stadium MK this week and the manager will have one final dress rehearsal tonight before it all starts for real in eight days time.


With just one game to go until the start of the Sky Bet League Two campaign, midfielder Jordan Houghton believes MK Dons are on the right path to success.