What we learnt: Tisdale's Oxford reaction


Paul Tisdale was pleased his MK Dons side were able to wrap-up their pre-season campaign with a positive performance and result against Oxford United. 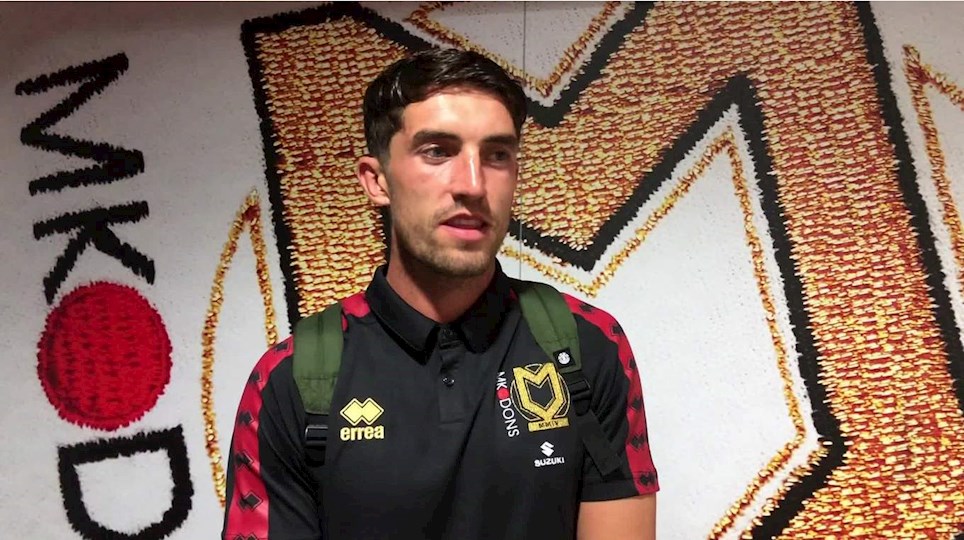 MK Dons wrapped up their pre-season campaign with a 1-0 victory over Sky Bet League One side Oxford United at Stadium MK.

The victory was nothing less than Paul Tisdale’s side deserved following a positive and dominant display in their final warm-up match of the summer.

MK Dons started well with Peter Pawlett and Alex Gilbey combining in the middle of the park. The former then sent a ball forward for Kieran Agard to chase but Oxford United goalkeeper Simon Eastwood raced out of his net to gather it.

Two former Dons then linked up for the visitors - Rob Hall collected a crossfield pass and teed up Samir Carruthers, who blasted over with a first-time shot from the edge of the area. Four minutes later, James Henry had a chance to test Lee Nicholls but curled his effort wide from the edge of the D.

MK Dons remained an attacking threat for most of the first quarter of an hour. On 11 minutes, Ryan Harley had a fierce drive blocked bravely by Curtis Nelson before a foul on the midfielder resulted in a free-kick, from which Kieran Agard sent a header just wide.

Oxford responded by producing a save out of Lee Nicholls. It was a tame header, though, from Henry and it was comfortably saved by the MK Dons goalkeeper.

There was plenty to be positive about in the opening exchanges but there was a blow on 20 minutes when Callum Brittain stayed down after a tackle on the far touchline. He received treatment for several minutes before being forced off - a not so welcome sight with just over a week until the start of the season.

The substitution didn’t affect MK Dons however and they remained on the front foot. On the half-hour mark, Agard glanced a header wide following a fierce George Williams cross. Peter Pawlett then got to the byline and almost found Agard with a cutback only for Eastwood to deny them linking up.

MK Dons then went even closer on 35 minutes, with Harley an inch away from converting at the far post from a low Agard delivery.

With four minutes remaining in the first half, Nicholls was truly tested for the first time and he came up trumps - getting his hands to Henry’s powerful left-footed strike.

MK Dons went just as close before the interval, though, when Agard flashed a shot wide from eight yards out after collecting the ball inside the box.

Tisdale made just the one change at half-time and it was a planned substitution that saw Oran Jackson come on to replace Joe Walsh, who got a valuable 45 minutes under his belt as he continued his recovery from a knee injury.

Tisdale's side started the second half in a dominant fashion and they almost took the lead on 52 minutes when Gilbey met a corner from Pawlett. The midfielder’s header beat Eastwood but was cleared off the line by a covering defender.

Pawlett then had two drives blocked, as MK Dons maintained the pressure, before Moore-Taylor saw a header saved from another excellent corner delivery.

A third corner then led to an opportunity for Harley but he couldn’t keep his 20-yard attempt down. Hall had the same problem at the other end moments later, with Oxford’s first effort of the second half.

On the hour, Tisdale made a double switch, introducing Ryan Watson and Lawson D’Ath for his first taste of Stadium MK as an MK Dons player. D’Ath replaced Gilbey, who continues to rack up the minutes ahead of a full return to action.

Soon after the changes, MK Dons had the ball in the net but it was chalked off for offside. Conor McGrandles, who replaced Brittain in the first half, threaded a pass through to Pawlett, who teed up Agard for a tap in - Pawlett, however, was offside.

Two minutes later, the ball was in the net once again and this time it stood. After a direct attacking run from Watson, who beat three U's defenders, his midfield partner D’Ath spread play out wide to Williams, whose fierce cross was turned home by Agard - a man whose whole-hearted performance deserved a goal. 1-0.

Three more substitutions followed the goal which resulted in MK Dons boasting an entirely new back four. Among them was Finn Tapp, who threw himself in front of Cameron Brannagan’s effort moments after coming on to keep the scoreline as it was. Jon Obika then headed over for the U’s, who had recycled possession.

By the 74th minute, the entire XI - bar Nicholls - was replaced but the MK Dons remained the more dominant side.

With nine minutes left to play, Watson almost made it two nil after chasing down a long pass forward. He got a touch to the ball ahead of Eastwood but a covering Nelson was able to clear for the visitors.

That led to a corner from which Oran Jackson sent a header over the bar at the far post. Oxford went straight on the attack from the goal kick and won themselves a free-kick that Luke Garbutt sent straight down the throat of Nicholls.

In the closing stages of the game, substitute Fabio Lopez missed a great chance for the U’s before Aidan Nesbitt produced a save out of Eastwood following some good skill on the edge of the area.

MK Dons’ youthful backline was depleted further in stoppage time when Jackson was forced off with an injury but they stood firm and held on to secure a confidence-boosting win.

What we learnt: Tisdale's Oxford reaction


Paul Tisdale was pleased his MK Dons side were able to wrap-up their pre-season campaign with a positive performance and result against Oxford United.