MK Dons return to Stadium MK this afternoon as they play hosts to Crewe Alexandra in their latest Sky Bet League Two fixture.

The Dons, who currently sit fourth in the Sky Bet League Two table, fell to a 4-3 defeat at Gigg Lane last weekend but in their latest clash at Stadium MK they were 6-0 winners against Cambridge United.

A 10th-home win could see them move back into the automatic promotion places should either Mansfield Town or Bury drop points in their respective matches.

Today's game should also see a bumper crowd at Stadium MK with the Club hosting a Fan Day.  Tickets are reduced to £10 for adults and £1 for under-18s while a range of activities will take place in the Marshall Arena Fan Zone prior to the 3pm kick-off.

Having finished 17th and 15th in their past two seasons in Sky Bet League Two, Crewe Alexandra will be hoping to earn promotion back into the third tier of English Football under the stewardship of David Artell. The Alex currently sit 14th in the table, having picked up 35 points from their 28 games this season – that points tally leaves them seven points off of a play-off spot.

Their home form has been more than impressive, with Artell’s side boasting the third-best home record in the league. However, it’s Crewe’s away success that will raise the eyebrows of their supporters - Crewe have picked up just six points from 14 away games this season. That said, they are certainly a side that can cause MK Dons problems – evidence of that being that they’ve already recorded wins over the likes of Lincoln City, Tranmere Rovers, Stevenage and Newport County this season.

Their squad contains a mix of home-grown talent and experienced EFL names, including Chris Porter, who is currently enjoying a career-best scoring run, having netted in five consecutive games.

MK Dons were beaten 4-3 by Bury at the Energy Check Stadium at Gigg Lane with the Shakers’ winning goal coming in stoppage time.

Paul Tisdale’s men led 3-1 with 17 minutes left to play courtesy of finishes from Jordan Moore-Taylor and Dean Lewington and an own goal from Chris Stokes.

Bury, though, fought back late to win the contest, with Nicky Adams scoring the decisive goal in the first of three additional minutes.

Crewe Alexandra were involved in a thriller of their own – they ran out 3-2 winners over Newport County last Saturday.

Joran Bowery had given Crewe the lead at the break, however, goals from Antoine Semenyo and Padraig Amond put Newport County ahead with 14-minutes left to play.

On the 88th-minute, Chris Porter slotted home from the penalty spot, before Callum Ainley hit a dramatic injury-time winner.

Paul Tisdale: “Crewe will want an away win. We have to approach every game here as though they will play their best game.”

David Artell: “MK Dons is a tough place to go. They have a good manager in Paul (Tisdale) and a good team but from the greatest of challenges come the greatest of performances.”

Paul Tisdale added to his ranks earlier this week with the signing of experienced defender Russell Martin - who could make his debut should he take to the field against the Railwaymen.

Martin bolsters a defence which saw Joe Walsh returned to action against Bury last weekend, and Jordan Moore-Taylor also named in the starting XI for the first time since he suffered an injury earlier this campaign. George Williams, though, limped off against Bury and continues to be assessed. Paul Tisdale didn’t rule out the possibility of the defender being available today.

Andy Haines will oversee this afternoon’s clash with Crewe Alexandra.

His assistant referees are Wayne Grunnill and Simon Shaw, while the Fourth Official is Anthony Da Costa.

Tickets for today's Sky Bet League Two clash with Crewe Alexandra are priced at just £10 for adults and £1 for under-18s.

Fans will also be able to enjoy a whole host of activities in the Marshall Arena Fan Zone prior to the fixture, with the fun starting at 12.30pm. 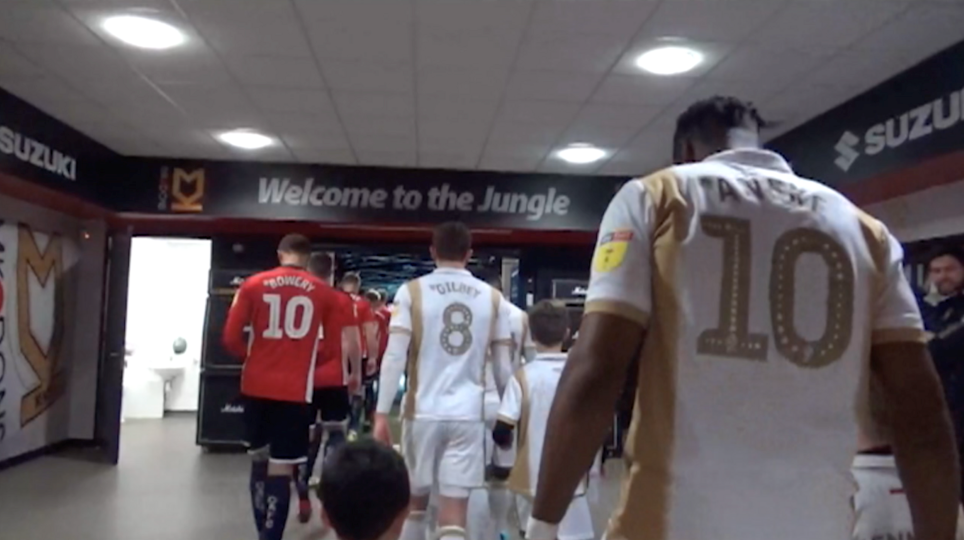 Charlie Kirk’s 32nd-minute goal was the difference at Stadium MK as Crewe Alexandra inflicted a 1-0 defeat on MK Dons.

Minutes after Peter Pawlett had a goal disallowed for offside, Kirk struck for the visitors - a goal which proved the difference as Paul Tisdale’s men slipped to fifth in the Sky Bet League Two table, four points adrift of the automatic promotion places.

Dean Lewington captained the side on his 600th league appearance for MK Dons while boss Tisdale made one enforced change to his starting XI, replacing the injured George Williams for Conor McGrandles. There was a place on the bench for new signing Russell Martin as well as Ryan Harley, who made his first appearance in the squad since August.

Crewe defender Perry Ng flashed an early shot wide for the visitors before Tisdale’s side sent two crosses into the box from the right-hand side.

A third delivery from the right almost led to the opening goal but Aneke headed wide from the edge of the six-yard box. The goal wouldn’t have counted, however, as the MK Dons forward was deemed to have pushed his marker.

On seven minutes, Nicholls gathered a deflected effort from the edge of the area. The Dons then earned their first corner of the game but they weren’t able to make it count - similarly Crewe wasted a set-piece just a few minutes later.

Kieran Agard saw a right-footed shot blocked behind on the quarter-hour mark moments before the Dons’ number 14 almost found himself on the end of a swift attacking move. Pawlett drove forward from midfield following an excellent pass from Lewington. He found Aneke, whose cross it was that was intercepted just in front of Agard.

Crewe responded and Charlie Kirk forced Lee Nicholls into a diving save with a tight-angled try. James Jones followed up with a long-range drive which Nicholls watched slide wide of his left upright.

A vital interception from McGrandles prevented the Alex covering from Ng’s cross on 22 minutes. The visitors kept the attack live, though, and Ng tried his luck again only to be denied by Nicholls.

The Dons goalkeeper was at it again two minutes later to keep out another effort from distance as Crewe continued to cause the home side problems.

Tisdale’s side had a glorious opportunity to take the lead just before the half-hour point as Aneke wrestled free of his marker and found himself one-on-one with Ben Garratt. Aneke went for the right-hand corner of the goal but saw the Crewe stopper guess correctly to keep it out.

A minute later, the Dons had the ball in the net through Pawlett but he was denied by the linesman’s flag - the midfielder adjudged to be in an offside position when turning home from McGrandles’ cross.

Crewe made their hosts pay for those missed opportunities as they took the lead with their next attack - Kirk able to move into the area and then stab an effort past Nicholls to break the deadlock. 0-1.

Gilbey almost produced an instant response for the Dons but his 25-yard drive was palmed away by Garratt. The MK Dons number eight was in action with five minutes to play in the half but couldn’t find a way past the Railwaymen’s goalkeeper from a tight angle.

In the final minute of the first half, Walsh blazed over from a free-kick delivered into the area from Houghton. That was the final opportunity before the half-time whistle sounded.

Tisdale replaced Pawlett with Harley at the break in an attempt to inspire a comeback.

It was Crewe who registered the first shot of the half - Bowery sending a deflected effort just wide of Nicholls’ left-hand upright. Nicholls later denied Jones from close-range.

MK Dons then started to turn on the pressure. Gilbey saw a right-footed strike blocked into the arms of Garratt before Aneke saw penalty appeals waved away after he was clattered in an aerial challenge by the Crewe stopper.

Sow was brought on from the bench in the 66th minute and he created a spark. Soon after coming on, he raced onto a through ball down the left channel before delivering a low cross which just needed a touch to take it home.

Aneke then saw a header from close-range blocked on its way to goal before Sow also had an attempted denied from fellow substitute D’Ath’s low ball.

MK Dons continued to force their opponents back but they were almost hit on the counter with eight minutes to play but Ng blazed over. They also had a goal disallowed for a foul on Lewington inside the area.

With four minutes to play, Aneke had a header deflected wide from D’Ath’s cross. Sow then sent a cross from Lewington off target from the edge of the six-yard box.

The final chance fell to Sow, whose volley was blocked.