MK Dons will be looking to continue their strong start to the season this evening when they take on Grimsby Town at Stadium MK.

Paul Tisdale’s side are unbeaten to start the campaign, having taken seven points from their first three matches, and they boast a 100 percent record at Stadium MK having won their opening two home matches in all competitions. The Dons also haven’t conceded a goal in almost 320 minutes of football.

It is form they will be looking to continue this evening against a Mariners outfit who they last met on the big stage back in March 2007 - the Johnstone’s Paint Trophy final at Wembley. MK Dons won that Final 2-0 and a similar result tonight, while not resulting in a trophy, would still be well received by Tisdale & Co.

Grimsby Town have picked up four points from their opening three Sky Bet League Two matches and are unbeaten in their last two league outings.

The Mariners responded to an opening-day loss at home to Forest Green Rovers by defeating Macclesfield Town 2-0 at The Moss Rose, despite playing half an hour with 10 men. They then drew 1-1 with county rivals Lincoln City at the weekend - a game they were unlucky not to win. 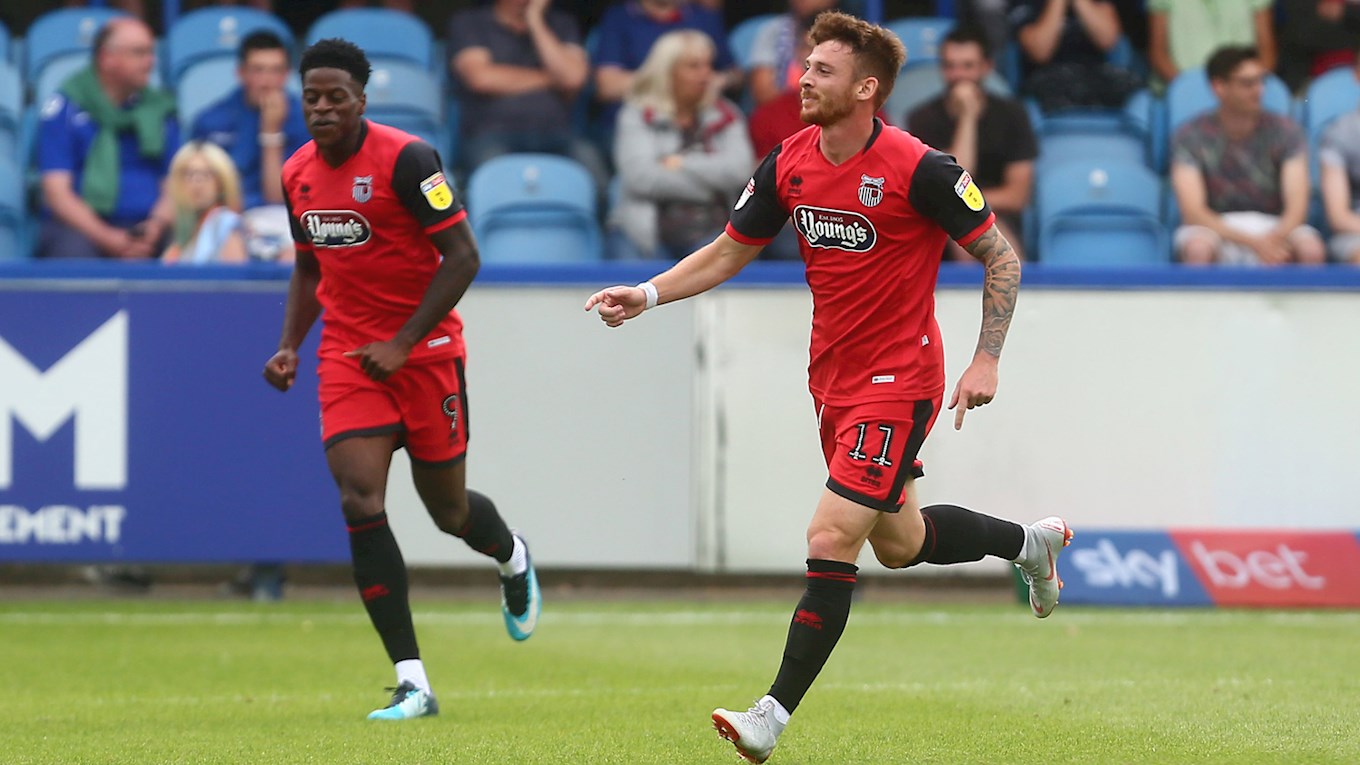 Their away form is impressive - Grimsby have won their last three away matches dating back to last season, scoring six goals without reply.

In terms of goal threats, Michael Jolley has seen four different players get on the scoresheet so far this season (Mitch Rose, Jordan Cook, Charles Vernam and Martyn Woolford) and bolstered his frontline last week with the acquisition of free agent striker Wes Thomas.

They edged the contest in terms of quality of chances, with Kieran Agard hitting the post in the first half and Ryan Watson forcing a strong save out of the Crewe goalkeeper in the second.

The Dons were, though, forced to play the final seven minutes with 10 men due to Mathieu Baudry’s sending off and therefore settled for a point, which manager Paul Tisdale was happy to take back to Milton Keynes.

The Mariners went ahead through Martyn Woolford, who stroked home a cross from Jordan Cook on 33 minutes. They then went close to doubling their lead after the break but Danny Collins saw a header cleared off the line.

However, Lincoln drew level with 19 minutes left to play - John Akinde scoring the from the penalty spot after being brought down by Collins.

Paul Tisdale: “Hopefully there’s nothing [injury-wise] from [Saturday]. We’ve got to keep the players going. Players will be tired but we’re into the season now so it’s important to be robust and your body needs to start coping with the demands. We need to keep players fit and focused - whether there’s one game a week or two.”

Michael Jolley: “I think it’ll be a really tough game. They’re unbeaten so far and they haven’t given much away to any of the teams that they’ve played - they’ve been a tough team to score a goal against, and they pose a threat like everybody does at this level

“It’s a huge one for us, but these are the kind of games you look forward to, and hopefully we can carry on performing like we did on Saturday.”

Speaking on Saturday, Paul Tisdale didn’t anticipate having any fresh injury concerns for tonight’s match but MK Dons will be without defender Mathieu Baudry who is suspended for three games following his red card at Crewe Alexandra. Grimsby have a suspension of their own to deal with tonight, as Mitch Rose serves the final game of his ban for a red card shown in their 2-0 win over Macclesfield Town.

Defender Danny Collins is out after having surgery on a broken arm while fellow defender Andrew Fox, midfielder Elliott Whitehouse and striker Harry Cardwell are also sidelined. Full-back Reece Hall-Johnson is a doubt but midfielder Harry Clifton is okay after coming through Saturday’s game unscathed despite carrying a knock.

Defender Luke Hendrie might make his Mariners debut after joining on loan from Shrewsbury Town but fellow new striker Wes Thomas is being brought along slowly.

He has run the rule two matches this season, producing six yellow cards, all of which came in his appointment at the weekend - the Sky Bet League Two clash between Cheltenham Town and Carlisle United.

Wright’s assistant referees this evening are Ian Dudley and Craig Taylor while the fourth official is Mark Wilson.

Supporters in the UK and abroad can watch the match LIVE by purchasing a £10 Match Pass – click HERE to book!

iFollow MK Dons subscribers will have also live commentary of the game – click HERE to sign up for as little as £4.49 for a month. Grimsby were reduced to 10 men late in the game which allowed MK Dons to press forward in numbers but they weren’t able to take advantage and therefore had to make do with a point - one which extends their unbeaten start to the season.

Tisdale named an unchanged stating XI for the first time this season, making only one enforced change to his matchday squad - David Kasumu replacing the suspended Mathieu Baudry, following his red card against Crewe Alexandra.

Lee Nicholls was forced into an early save by JJ Hooper, who found an inch of space 20-yards from goal and sent a low drive towards the near post which the MK Dons goalkeeper palmed wide.

Grimsby maintained their dominant start and on 10 minutes, Cook got behind the MK Dons backline but both Joe Walsh and Dean Lewington raced back in time to deal with the Mariners forward.

MK Dons had their first sighter on goal soon after, with Alex Gilbey meeting a Ryan Watson cross from the left but heading wide. Gilbey threatened again on 13 minutes, collecting a pass from Jordan Houghton and driving to the edge of the D before fizzing a right-footed shot wide of the target.

Grimsby responded from a free-kick which was cleared only as far as Martyn Woolford, who saw his left-footed strike blocked on its way to goal by Watson.

The MK Dons defence got in the way of another Mariners attempt on 17 minutes and that led to a counter attack, started by Ousseynou Cisse, which resulted in a Watson drive which was sent wide of the left upright.

Gilbey fired over moments later as Tisdale’s side continued to trouble the visitors goal. Grimsby then offered a reminder of their threat from a clever corner routine which was eventually blocked dealt with deep inside the six-yard box.

Nicholls was called into action again in the 23rd minute to keep out Cook’s on-target strike before Callum Brittain’s deflected effort had Stadium MK on its feet, only for the home support to see the ball land behind the goal rather than in the net.

On the half-hour mark, Gilbey watched another one of his fierce shots fly agonisingly wide of goal - this one from inside the area after cutting in from the left.

It was Grimsby, though, who broke the deadlock with 10 minutes remaining in the half as Woolford broke free down the right and forced a diving stop out Nicholls. The loose ball from the parried save fell kindly to Cook, who fired in the rebound to give the visitors the lead. 0-1.

MK Dons almost levelled things up before the break but Brittain’s deflected shot was clawed away from goal by a diving James McKeown.

They weren’t able to find a first-half equaliser, however, and that led to a double-change at the break - Simpson and Baily Cargill coming on in place of Alex Gilbey and Ryan Watson.

The former made an instant impact, drawing MK Dons level with his first touch of the ball - a close-range header from Williams’ inch-perfect cross. 1-1.

Simpson almost scored again in the 49th-minute but was denied by an excellent diving save from McKeown, after racing onto Cisse’s through pass.

The striker was making a real difference and his teasing cross in the 50th minute almost provided Cisse with a chance at goal but the ball was well dealt with by a Grimsby defender.

Cisse did have an opportunity moments later after being picked out on the edge of the box by Brittain. The Malian opted for a first-time shot from the low cross but saw his attempt deflected over the crossbar.

MK Dons maintained their excellent start to the half and shortly after the hour-mark, Agard flashed a left-footed drive just over the bar from 20-yards out.

Mariners substitute Charles Vernam provided Nicholls with a rare second-half scare in the 78th minute, dragging a low right-footed shot wide from just inside the penalty area. That was followed up by a Jake Hessenthaler drive which also missed the target.

Tisdale’s side responded with Simpson heading wide from a Cargill cross, as they searched for a dramatic late comeback goal. Their pursuit of that winning goal was made all the more easier with eight minutes remaining as Grimsby defender Paul Dixon was shown a starchy red card for a late and dangerous tackle on Moore-Taylor.

MK Dons pushed forward in numbers whenever they got the opportunity, firing balls into the area from both flanks.

Cisse powered a header wide from a corner with under four minutes remaining. A later corner caused an almighty scramble in the six-yard box but despite several efforts on goal, MK Dons weren’t able to force it home.

That was the closest they came to securing a dramatic late winner. They will take their point and look to build on it at the weekend when they take on Exeter City at Stadium MK.