MK Dons have made an unbeaten start to the season, taking eight points from their opening four league matches including victories over Oldham Athletic and Bury.

They have only conceded two goals in 540 minutes of league football which has been the catalyst to their early success.

A victory today at Stadium MK would see MK Dons leapfrog their opponents and may even move them into the top three automatic promotion spots - although very early in the season, it would still provide a welcome sight to the home supporters.

Exeter have made an impressive start to the season, currently sitting top of the Sky Bet League Two after four games. 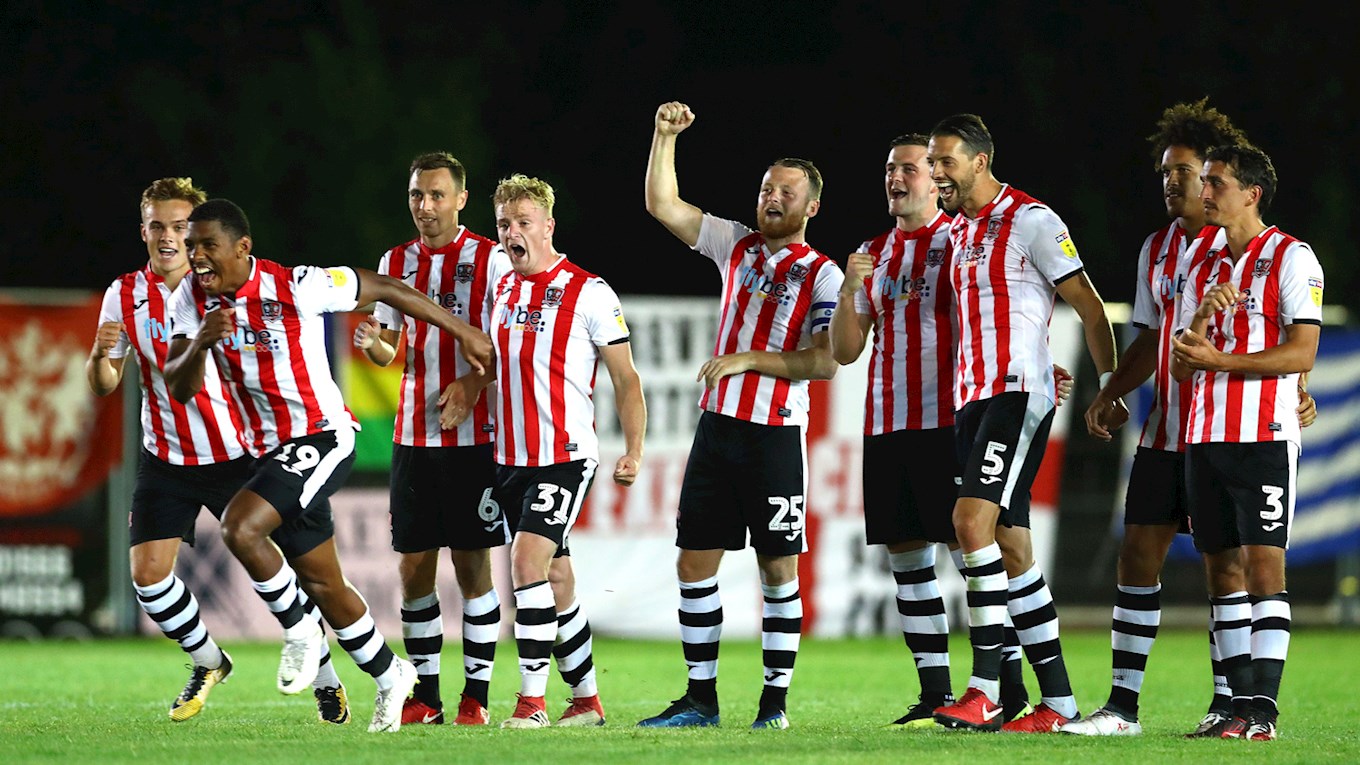 They are level on 10 points with Lincoln City but boast a better goal difference having only conceded twice. At the other end, they have found the net eight times with striker Jayden Stockley leading the way in terms of goals with three to his name.

The Grecians’ only dropped points came at home to Newport County a week ago where an 81st-minute goal from Mark Harris denied them a third successive win. They responded in midweek, though, with 2-0 triumph away at Colchester United.

Grimsby were reduced to 10 men late in the game which allowed MK Dons to press forward in numbers but they weren’t able to take advantage and therefore had to make do with a point.

The Grecians were set on their way to victory with two goals inside the opening quarter of an hour.

Jonathan Forte opened the scoring with eight minutes gone, stealing in to beat goalkeeper Dimitar Mitov after George Taft could only guide Pierce Sweeney's long ball towards his own goal.

The lead was doubled six minutes later through Jayden Stockley, whose header from Craig Woodman's cross went straight to Mitov but then through the goalkeeper's hands before rolling over the line.

MK Dons manager Paul Tisdale: “More people outside are talking about it than we are here, but I can't ignore the fact that I've got 12 years of history there so of course there are emotions.

“But, generally, it will be a regular football match, with 11 players against another manager with 11 players. Of course, there are players in that team that I know but I'm 100 per cent focused on the players I'll selected here, the subs who can change the game and the supporters supporting MK Dons - that's the way it has to be.”

Exeter City manager Matt Taylor: “It is a game of football, simple as that. We are going there to win this game of football. It is another three points at stake. We are on the back of a good run. We are still unbeaten, but it is the toughest test we will face so far.

“They are a good team, with a good manager, good staff and good people. It is always a difficult place to go.”

MK Dons will have to wait to discover if new singing Rhys Healey can make his debut today with international clearance needed before the striker is eligible to play.

Meanwhile, Paul Tisdale has no fresh injury concerns but remains without the likes of Peter Pawlett, Conor McGrandles and Osman Sow.

Sam Nombe and Brandon Thomas-Asante have both returned to light training and featured in a practice match during the week but it remains to be seen whether they are fit enough to be involved in first-team action.

Nicky Law could return to the starting line-up for Exeter City after he featured for them last week.

Centre-back Troy Brown missed out through injury in midweek so Aaron Martin could partner Dean Moxey in the middle of the defence with Craig Woodman taking the latter's usual place at left-back.

Charles Breakspear will run the rule over this afternoon's clash as he takes charge of his fifth match of the season.

The vastly experienced referee has so far issued ten yellow cards this season, while he has dished out four reds. 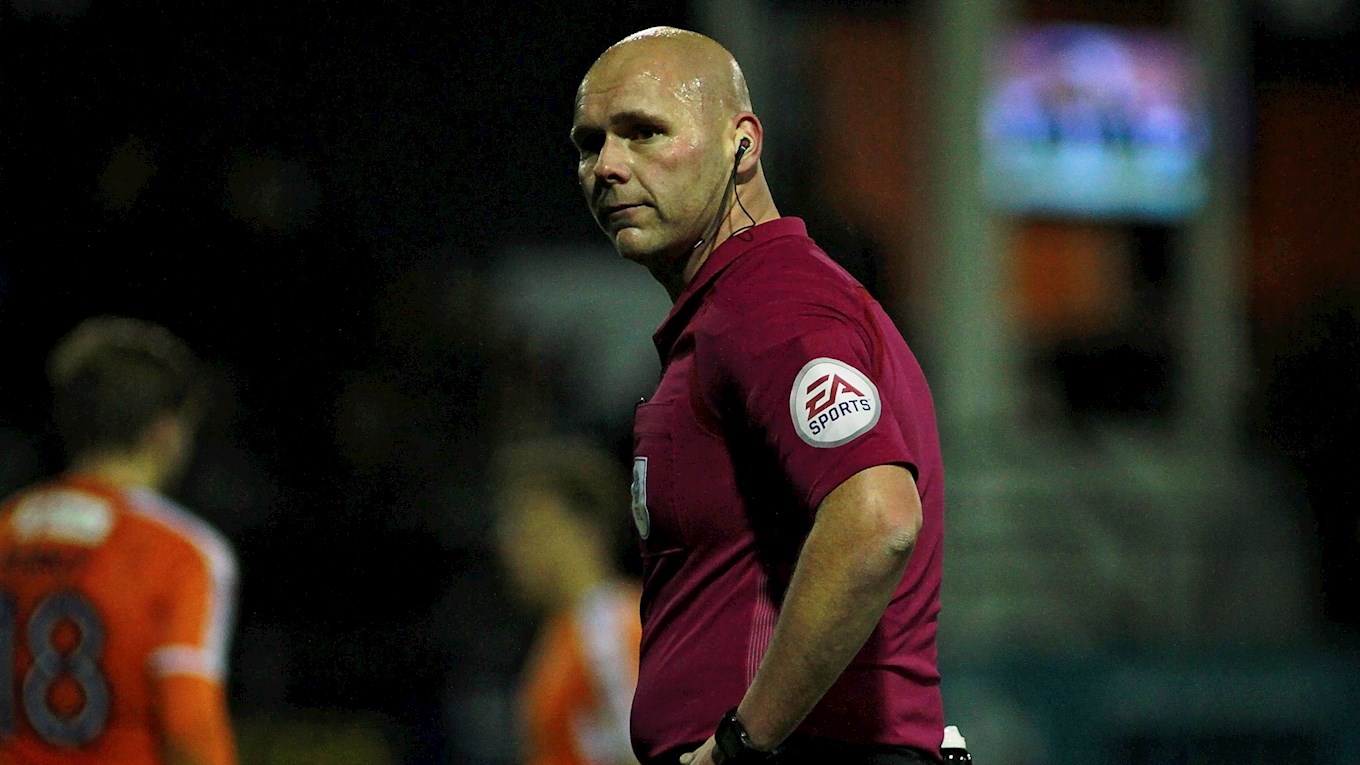 Mr Breakspear last took charge of the Dons during their dramatic 1-0 win over Peterborough back in December 2017 – that day he dismissed both Joe Walsh and Osman Sow.

His assistant referees today are Thomas Harty and Paul Lister, while the Fourth Official is Ian Smedley. Agard, who missed an earlier spot-kick from 12-yards, made amends by converting from a later penalty to extend MK Dons’ unbeaten run to six games with their third league victory of the campaign - a result which sees them climb to second in the Sky Bet League Two table.

Paul Tisdale made two changes to his starting XI with Robbie Simpson, who scored the equaliser against Grimsby Town in midweek, replacing Ousseynou Cisse and Baily Cargill coming in to make his first league start for MK Dons in place of Ryan Watson.

Tisdale’s men started bright and there was a half-chance for Kieran Agard inside the opening minute but he fired wide after latching onto Simpson’s flick-on. Agard attempted to return the favour to Simpson two minutes later but his low cross to his strike partner just past him by.

Exeter threatened for the first time in the seventh minute but Cargill did well to race back and dispossess Jonathan Forte inside the area, just as he was about to test Lee Nicholls. That proved to be Forte’s last involvement as he was forced off with an injury shortly after.

MK Dons continued their strong start, with Gilbey the next man to threaten the goal - sending a 20-yard drive wide of the left upright after winning the ball off an Exeter defender.

The hosts were then awarded an inviting free-kick following a foul on Agard inside the D. Captain Dean Lewington took it and forced a strong save out of Christy Pym, moving to his right.

Exeter responded and Williams had to be alert to head clear a Lee Holmes cross in front of an in-form Jayden Stockley. They then registered their first shot - a left-footed strike from substitute Lee Martin which Nicholls watched wide.

They went closer than that in the 24th minute through Holmes, who raced onto Stockley’s through pass and then bent a shot just around the right post.

Gilbey fired back with a try from distance although it failed to trouble Pym. Agard followed up with a left-footed shot from the edge of the D on the half-hour mark but he too couldn’t find the target.

Agard threatened again with six minutes remaining in the half but, after collecting a ball near the byline, he found himself with little other option than to try and beat Pym which he wasn’t able to do with his stabbed effort.

A better opportunity fell the way of Callum Brittain moments later but from Gilbey’s cutback the on-rushing full-back wasn’t able to connect and fire a shot on goal courtesy of some good defending from Aaron Martin. That proved to be the final chance of the first half.

Brittain was involved in the first real attacking move of the second period, working his way into the Exeter before seeing a left-footed shot blocked behind for a corner. The corner was taken short and then delivered for Gilbey, who was quickly closed down on the edge of the box.

Agard then curled wide on 50 minutes before MK Dons were awarded a penalty following a blatant handball by Martin in the area. Not only that, Martin was dismissed by referee Charles Breakspear as a result of his error.

Agard stepped up to take the penalty but wasn’t able to give his side the lead - he was denied brilliantly from 12-yards by Pym.

Tisdale’s side, now with a man advantage, kept their foot firmly on the pedal and Simpson had a low shot blocked moments later, after latching onto Gilbey’s through pass. Agard then glanced a header wide from Brittain’s cross.

On 64 minutes, a deflected shot from Brittain caused panic in the Exeter box but they managed to turn it behind for a corner. From that deliver, the Grecians were again penalised for a handball - this time by Stockley.

Agard showed no hesitation in picking the ball up and trying his luck against Pym once again. On this occasion, he beat him and fired home his second goal of the season from 12-yards to give MK Dons a deserved lead. 1-0.

MK Dons maintained control of the game and went agonisingly close to a second goal from another corner. Moore-Taylor met the delivery and headed the ball across goal to Agard, who connected but couldn’t divert his effort into the net.

On 72 minutes, Tisdale made his first substitution of the game. He handed Rhys Healey, signed on Friday from Cardiff City, his debut in place of Simpson.

The attempts kept coming from MK Dons and Gilbey sent an effort over from just inside the area with less than 13 minutes left to play.

Exeter, with little to lose, threw men forward in the closing stages and a chance fell to Pierce Sweeney on 80 minutes but he blazed over when well-placed inside the MK Dons box.

Hiram Boateng also cleared the crossbar for the visitors shortly before Agard saw a shot blocked at the other end as he looked to make the game safe for MK Dons.

Houghton almost did that in the 89th-minute with a goal-bound cross that evaded everyone but goalkeeper Pym, who made an acrobatic save to keep it out.

Tisdale made two late substitutions with Cisse and Lawson D’Ath coming on to see the game out. They helped do the job as a fourth clean sheet of the campaign ensured another three points for Tisdale & Co.