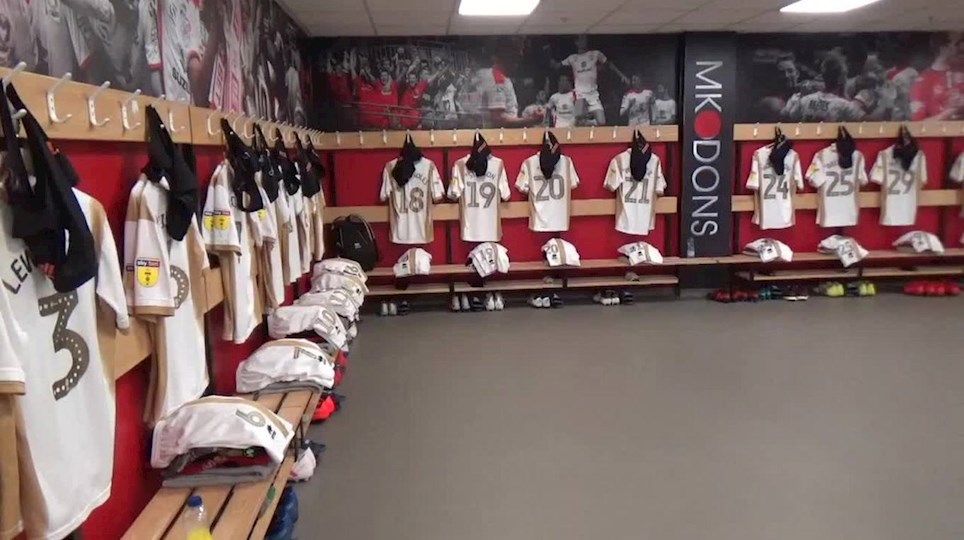 
Easter Monday was a bittersweet day for returning George Williams. Tisdale: We have to go again


Paul Tisdale insists MK Dons can’t afford to feel sorry for themselves after the 1-1 draw with Port Vale, and must quickly switch their focus to their crucial clash with Colchester United this...

MK Dons were held to a 1-1 draw by Port Vale in a frustrating game at Stadium MK.

Kieran Agard missed a first-half penalty for Paul Tisdale’s side, who then went behind when Tom Conlon fired home from a tight angle inside the area.

David Wheeler slid home an equaliser on 53 minutes but despite a lot of huff and puff, the Dons were unable to edge in front and secure all three points.

It's a result which sees the Dons fall out of the automatic promotion places on goal difference with two games to play. Their fate, though, remains in their own hands - two wins and they're up.

Boss Tisdale named an unchanged starting XI from the side which beat Notts County 2-1 at Meadow Lane. The seven substitutes remained the same also - a bench which included the Good Friday match-winner Chuks Aneke and George Williams.

Port Vale threatened first with a low drive from Tom Conlon which was blocked by the MK Dons defence and then booted away by Dean Lewington. Jake Hesketh tried to respond with a driving run down the left but he took a heavy touch and the ball ran out for a goal kick.

On 10 minutes, MK Dons earned themselves a corner which Lewington delivered over to the far to Ouss Cisse. His header back across goal was cleared only as far as Hesketh, whose dipping volley was straight into the arms of Scott Brown.

Brown was worked harder two minutes later, having to get his fingertips to a fierce strike from Ryan Harley which looked to be flying over the Vale stopper’s head. That led to successive corners and from the later, Wheeler sent a looping header onto the roof of the net.

The Dons maintained their pressure on the Port Vale goal and went close again on the quarter-hour but Hesketh’s low pass into the box was gathered by Brown ahead of the on-rushing Cisse. Harley then sent a fizzing ball across the face of goal - one which didn’t find the required touch.

On 27 minutes, Agard glanced a header wide from Lewington’s cross. The striker was then presented with a great opportunity to put his side ahead but failed to convert from the penalty spot after a high foot from a Valiants defender. Agard had another bite at the cherry after Brown’s save but was, again, denied by the goalkeeper.

The Dons kept their foot on the gas and Hesketh worked his way into the penalty area two minutes later - he flashed a ball across goal but it wasn’t turned home. Vale then responded with Danny Elliott threatening twice - first, the striker sent a half-volley over the crossbar before he headed wide moments later.

Agard had another opportunity to find the net with a minute remaining in the half but dragged his left-footed effort wide from the edge of the area. That was the final action of a first 45 in which the Dons dominated but had nothing to show for it.

Port Vale offered the first attack of the second half through Elliott, who dragged a low shot wide of Nicholls’ goal. Their second resulted in a goal - Tom Conlon firing past Nicholls after being picked out unmarked in the penalty area. 0-1.

Tisdale’s men were presented with an immediate chance to respond from a free-kick awarded for a foul on Wheeler. Lewington delivered but his teasing cross was headed away by a Port Vale defender. The captain sent another free-kick into the mix shortly after but Brown gathered.

A third opportunity to equalise arrived on 53 minutes and this time they converted. Hesketh raced into the area down the right and delivered a ball across goal to an on-rushing Wheeler, who slid home his second goal in as many games to level the scores. 1-1.

Aneke was introduced from the bench three minutes later and he was involved as they went close to a second goal on the hour. He teed up Hesketh, whose low ball to the near post was turned behind by a defender in front of McGrandles.

At the other end of the pitch, Luke Hannant drew a save out of Nicholls with a fierce strike to the near post. Teammate Cristian Montano then flashed a long-range effort wide for the visitors.

On 72 minutes, Harley lifted a ball into the box but it was above the heads of both Wheeler and Hesketh. Port Vale then countered and Elliott forced Nicholls into another diving stop.

Stadium MK thought Aneke had put the Dons in front with a quarter of an hour to go but his effort, when one-on-one with Brown hit the outside of the post and flew wide. Port Vale then thought they’d gone ahead when Montano struck - his effort also ended up wide.

With 13 minutes to play, Williams and Robbie Simpson were brought off the bench in hopes of inspiring a late winner. It was Vale who thought they scored that decisive goal with three minutes to play, but substitute Tom Pope flashed his effort over.

The fourth official awarded seven minutes of stoppage time and in the second of those, Brittain sent a dipping shot goalwards but Brown saved. Lewington had a later try but failed to find the target.

That proved to be the final effort on goal as the Dons were forced to make do with a point. On to Colchester next with their fate still very much in their hands.


Easter Monday was a bittersweet day for returning George Williams.

Tisdale: We have to go again


Paul Tisdale insists MK Dons can’t afford to feel sorry for themselves after the 1-1 draw with Port Vale, and must quickly switch their focus to their crucial clash with Colchester United this...