Despite his side extending their unbeaten run to five games, Robbie Neilson was disappointed not to pick up maximum points at home. 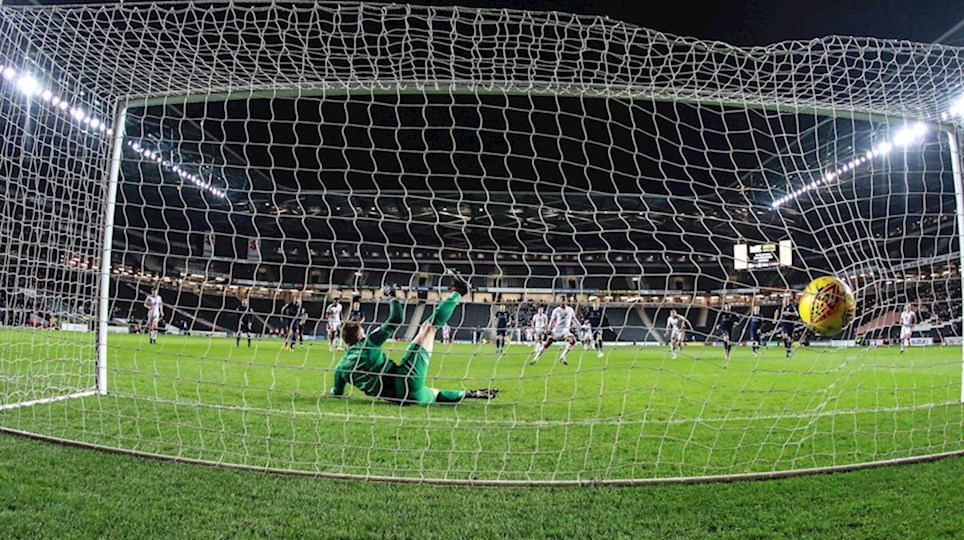 MK Dons and Southend United shared the spoils at Stadium MK, with Kieran Agard on target once again from the penalty spot.

However, the man who rescued a point at the weekend - Agard - once again showed his composure to convert a 76th-minute spot-kick in front of the Cowshed, making it five unbeaten for Robbie Neilson's side.

Neilson was forced into making changes to his starting XI, with trio George Williams, Ethan Ebanks-Landell and Ed Upson all suspended. In came Callum Brittain, Joe Walsh and Conor McGrandles while there were also starts for Aidan Nesbitt and Agard, fresh from his brace off the bench against Charlton Athletic.

It took just three minutes for the game to have its first talking point - a penalty awarded following a free-kick delivered into the area, although there were few inside Stadium MK who seemed to know what the foul was for.

Nonetheless, Wright stepped up to take the spot kick but the forward - who missed a penalty at Stadium MK earlier this season while playing for Gillingham - was denied by a well-timed dive from Nicholls, which kept the scores level.

Despite its frantic start, the game failed to really get going in the opening quarter of an hour, with neither side able to sustain any real pressure on their opponents.

In fact, the next shot on target following the penalty didn’t arrive until the 20th minute when Nicholls stood tall and kept out an effort from Marc-Antoine Fortune at his near post.

Five minutes later, the Shrimpers threatened direct from a corner with Nicholls doing well to tip the delivery from Michael Kightly over the crossbar.

It was the visitors who looked the more likely to break the deadlock and in the 27th minute they did open the scoring - after a quick breakaway, McLaughlin received a pass from Fortune and fired in to the top left-hand corner of the net.

The Dons responded - Aneke came close to connecting with a cross from Nesbitt before Scott Golbourne had an effort blocked inside the area.

The aforementioned chances aside, there was very little in the way of action in the final thirds for much of the first 45.

In the closing stages of the half, a last-ditch tackle deep inside the area prevented Gboly Ariyibi from what would have been a golden opportunity to equalise.

An even better chance on goal fell the way of McLaughlin in stoppage-time but, after latching onto a through-ball, the Shrimpers man couldn’t beat Nicholls, who made a terrific one-on-one save to keep the deficit at a single goal going into the break.

Neilson introduced Peter Pawlett at the the interval, hoping the summer recruit would provide a spark for his side.

His teammates Aneke threatened with a strike on 55 minutes but the shot was blocked by a defender. The powerful forward then headed over from Pawlett’s free-kick, moments after Southend forced Nicholls into a save from a free-kick of their own.

The Dons’ best chance of the match to date came in the 65th minute when Gilbey saw a low drive deflected just wide of the left post from the edge of the area. From the resulting corner, Nesbitt drilled wide with a strike of his own.

The home supporters inside Stadium MK continued to urge their side on and with a quarter of an hour remaining they were handed a lifeline after Mark Oxley crashed into Aneke inside the area, with the ball already way past the goalkeeper.

Agard stepped up to take the spot kick and, just like he did at the weekend, confidently fired home his third goal in two games to draw the men from MK1 level.

After getting themselves back into the game, there were hearts in Dons’ mouths on 88 minutes when Simon Cox rattled the crossbar with a header. Michael Turner then hit the woodwork with a headed effort of his own soon after.

Substitute Brandon Thomas-Asante sent a 25-yard shot wide early in stoppage-time with the Dons' final chance of the contest.


Despite his side extending their unbeaten run to five games, Robbie Neilson was disappointed not to pick up maximum points at home.