Matt Gilks' heroic performance last Saturday denied Robbie Neilson’s side all three points in what was perhaps the Dons' best performance of the season.

The men from MK1 dominated a Scunthorpe United side tipped for promotion and created numerous chances only to be thwarted by the impressive Gilks between the sticks. Goals from Kieran Agard and Chuks Aneke were enough to earn the Dons a share of the spoils, however, it was Neilson who came way the most disappointed.

After impressing against the Iron and Shrewsbury Town the week prior, the signs are certainly positive and if Dons continue to play the way they are then the draws may turn into wins.

Rotherham currently sit in 10th place in the Sky Bet League One table and under the stewardship of Paul Warne, they’ll be aiming for a play-off position come the end of the season.

The Millers finished bottom of the Sky Bet Championship table last year having won just five of their 46 games. This season, they’ve very much steadied the ship at The New York Stadium with summer additions such as Semi Ajayi and Richie Towell impressing alongside Kieffer Moore who has netted 13 times in the league during his loan spell from Ipswich.

Semi Ajayi’s dramatic late equaliser earned Rotherham United a share of the spoils against Plymouth Argyle after Ryan Taylor looked set to came back to haunt his former club.

Paul Warne’s men shrugged off the disappointment of the second-half dismissal of skipper Richard Wood to earn a point, when Ajayi’s first league goal of the campaign cancelled out Taylor’s opener.

Robbie Neilson:  “They are a strong team. It’s going to be a tough game between two teams who will be looking to use this period to springboard their season."

Robbie Neilson will be hoping to welcome Alex Gilbey back into his side as the midfielder looks to shrug off his knee injury that has kept him out of action in recent weeks.

Scott Golbourne, who limped off against Scunthorpe United should be ready for Saturday, however, the tie looks to have come too soon for both Ousseynou Cisse and Callum Brittain.

After his red card against Plymouth Argyle last weekend, Richard Wood will miss this weekend’s tie. Former Don Darren Potter has been struggling with an Achilles injury of late so may also miss the encounter.

Rotherham will also be without Kieffer Moore who is serving the final game of his three-match suspension after he saw red against Bristol Rovers earlier in the month.

The Lancashire-born official has run the rule over 25 games this season and has produced 68 yellow and three red cards this season. The last time he oversaw the Dons meanwhile, was during their 4-0 win over Peterborough January 2017.

Salisbury's assistant referees this weekend are Kevin Howick and Grant Taylor while the fourth official is Rob Smith. 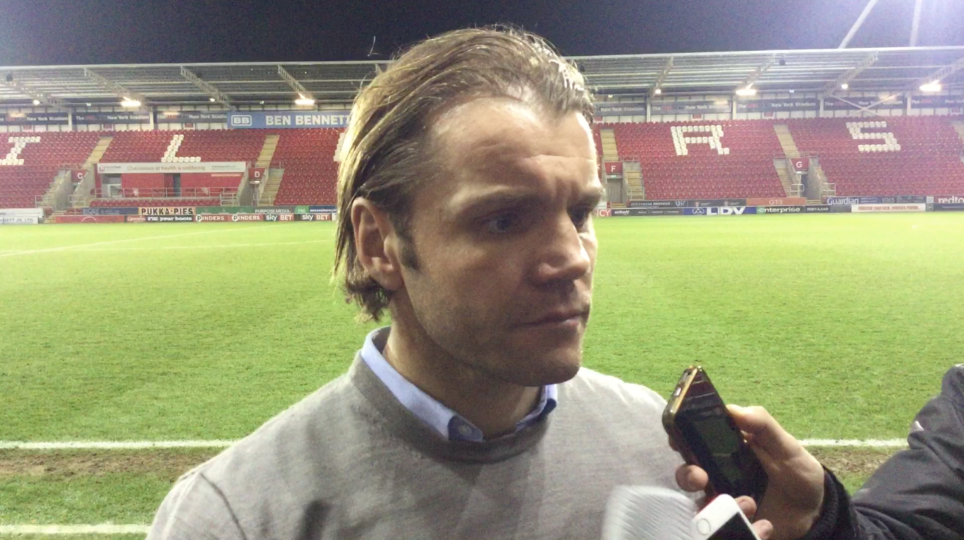 Chuks Aneke put the men from MK1 ahead the ninth minute with a brilliantly taken free-kick but quick-fire finishes from Semi Ajayi and Will Vaulks ensured Robbie Neilson’s side left South Yorkshire empty-handed.

Boss Neilson was forced into one change after Scott Golbourne was ruled out with a hip injury - Scott Wootton replaced him in the starting XI. There was also movement on the substitutes bench as Alex Gilbey and Ousseynou Cisse returned from injuries.

Rotherham registered the first shot on target inside three minutes when David Ball headed an Anthony Forde cross straight into the arms of Lee Nicholls. The Dons then threatened from a free-kick on seven minutes but Ed Upson’s delivery was just above the head of Kieran Agard.

Neilson’s men were awarded a second free-kick shortly after and from that one, they took the lead. Aneke was the man fouled and the Dons’ number 10 picked himself to curl a beauty around the wall and past the outstretched right arm of Marek Rodak. 0-1.

Millers defender Vaulks dragged a right-footed shot wide as the hosts went search of an immediate response before Upson tested Rodak with a curling effort from 18-yards - the Rotherham goalkeeper was equal to the shot.

Nicholls was called into action in the 18th minute, forced to slide down to his right to keep out a low drive from Lee Frecklington. Two minutes later, from a corner, the home team levelled the scoreline - Ajayi the man with the decisive touch inside the six-yard area. 1-1.

Aneke went close to restoring the Dons’ lead with a low shot from the edge of the area which just skipped wide of the post. Pawlett followed up with a left-footed drive of his own but his effort was blocked by a defender.

Goalscorer Ajayi then headed wide for Rotherham before Ebanks-Landell and McGrandles combined to get in the way of a goalbound attempt from Ball.

However, there was nothing the Dons defenders or Nicholls could do to deny Vaulks on the half-hour mark as the defender collected a headed clearance and sent a fierce half-volley into the top corner from the edge of the D. 2-1.

The Millers enjoyed a dominant spell after edging ahead with the Dons’ only real chance at drawing level before the break coming from Osman Sow, who directed a header wide of the target. Rotherham’s best effort came courtesy of Ball, who fired high and wide from inside the area.

Neilson’s Dons had a big 45 minutes ahead of them but less than 90 seconds in they had Nicholls to thank for keeping the deficit at one goal - the Dons goalkeeper did brilliantly to keep out Jerry Yates’ effort from point-blank range, after the midfielder had been teed up by Ryan Williams.

A superb block from Wootton then denied Ball after a similar attacking move from Rotherham, moments after Walsh directed Upson’s cross wide of the right post at the other end of the field.

That was Upson’s last real involvement as he was replaced on 58 minutes by Gilbey, back in the side after a spell on the sidelines. He had a sighter on goal soon after entering the contest but sent his drive wide of the left-hand upright.

With 66 minutes on the clock, Neilson introduced Gboly Ariyibi in hopes of inspiring a comeback. The Dons almost started that revival moments after his introduction but Gilbey couldn’t convert after Rodak failed to hold Agard’s fierce shot.

Another good opportunity fell the way of Ethan Ebanks-Landell on 68 minutes but he failed to find the target from Ariyibi’s corner. Joe Mattock then saw a strike land on the roof of Nicholls’ net as Rotherham offered the Dons a rare second-half reminder of their attacking threat.

The Dons continued to threaten as the game entered its final quarter and Aneke produced a pair of saves out of Rodak in the space of five minutes with a header and a free-kick.

Late in the game, Aneke then had what appeared to be a decent penalty appeal turned down by the referee, with help from his assistant - a decision which didn’t sit well with the Dons players in the vicinity.

Neilson threw on Brandon Thomas-Asante in stoppage time - one final roll of the dice from the Dons boss - but neither he nor his teammates could muster a chance to earn a share of the spoils.